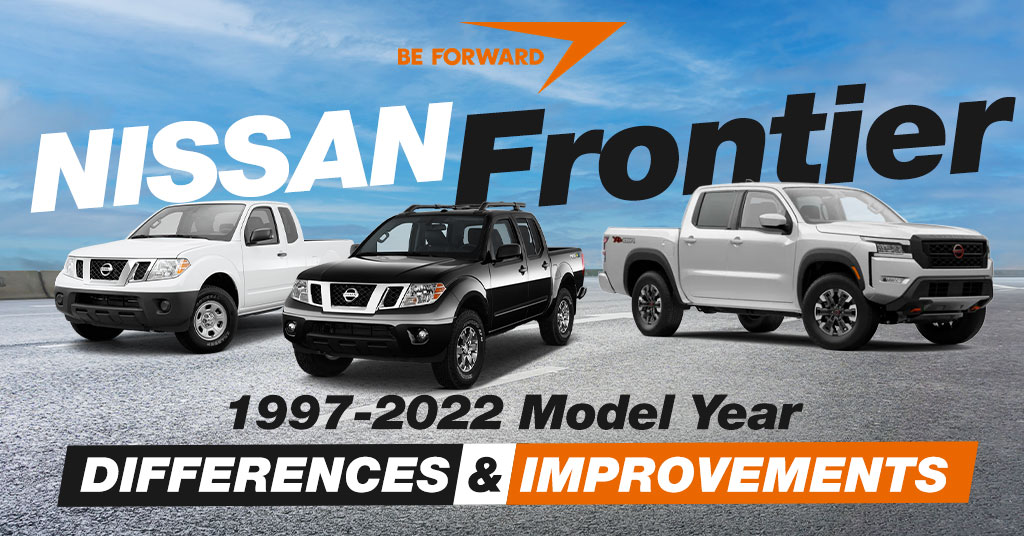 The Nissan Frontier is a pickup truck manufactured and sold by the Japanese automotive manufacturer Nissan in North America and Canada. From 1997 Nissan began using the Frontier nameplate in several regions as a replacement to the Hardbody, Navara, and NP300 nameplates. From 2021, the Frontier manufactured and sold in the US is a separate and distinct model from the globally marketed Frontier/Navara. This model is designed to cater to the needs of the North American market and is now larger compared to models sold in other markets.

Here we take a look at the three different generations of the Frontier and how they have evolved. Please follow through.

Nissan introduced the first generation of the Nissan Frontier in 1997 as an update to the outgoing Hardbody truck. The Frontier was sold as a 2-door single cab or a larger 2-door King Cab. In 2000, Nissan introduced a 4-door Crew Cab model, which featured four front-hinged doors with the capacity of accommodating three passengers on its rear seat in trying to make the Frontier a family and work vehicle. In 2001, more exterior changes were made on the Frontier which gave the car a more aggressive exterior styling.

The face of the Frontier features a chunky radiator grille with the Nissan logo with chrome finishing at its center plus headlights, a bumper decorated with a chrome strip and a wide air intake. On the sides, flared wheel arches with black protective moldings can be seen.

The interior is done with hard plastics, the dash is curvy lines of the dashboard, and the instrument cluster is basic, it consists of the speedometer and other small gauges on the sides. The Cre cab model comes with front bucket seats and a bench seat at the rear. Storage options include door pockets, a glovebox, and a storage bin between the front seats.

Later a supercharged version of the 3.3-liter V6 petrol engine was made available with 210 hp and 246 lb-ft of torque.

The second-generation Frontier was released in 2005. It was based on a minimized version of the rugged F-Alpha platform used on the Titan full-size truck which made the car larger and power improved as well.

This model is only available in King (with rear-hinged rear mini-doors) and Crew cab configurations, while the Single Cab was no longer part of the lineup. Available trims include the XE, SE, LE, and Nismo (off-road package).

This Frontier was highly influenced by the Titan, mostly noticeable on its bold profile, prominent fender flares, bumper treatments, and a bright grille. The King Cab has a 6-foot bed and the Crew Cab has a 5-foot bed, with both of them offering dividers and extenders.

In 2009, the Frontier received some cosmetic updates which included a redesigned hood, grille, and new wheel designs to freshen up the exterior looks.

Inside, the Frontier cabin gained more space which mostly benefitted the Crew Cab models, as it rendered the rear seat more usable. The dash and door panels featured some monochrome plastic finishing, with chrome door handles. The white-on-black instrument panel is easy to read and the controls are within reach and user-friendly.

In 2020, Nissan introduced a new 3.8-liter V6 petrol engine with 310 hp and 281 lb-ft in place of both the four-cylinder and V6 engines. A new nine-speed automatic transmission was introduced as well and the six-speed manual was dropped.

In 2022, after a long while, Nissan introduced the third-generation Frontier. This new Frontier is built on a revised high-strength steel ladder frame chassis, revised suspension, and body style. This Frontier model is exclusively designed for the North American market.

This 2022 Frontier is like its predecessor is available in two body styles which are the two-door extended cab (King Cab) and a four-door crew cab. The extended cab has a 6-foot bed, while the crew cab is available with either a 5- or a 6-foot bed. There are four trim levels: S, SV, Pro-X, and Pro-4X (crew cab only).

The 2022 Frontier comes fitted with a 3.8-liter V6 petrol engine with 310 hp and 281 lb-ft of torque. This engine is paired with a nine-speed automatic transmission as the sole transmission choice.

The Nissan Frontier is a great car and Nissan’s wild card in the American truck market. The Frontier comes from a company that has pioneered and is known for producing reliable, durable, and dependable trucks, and the Frontier does have these qualities too. But being a late entrant in the American midsize truck market has led to the Frontier playing catchup to the likes of the Ford Ranger, Toyota Tacoma, Chevy Colorado, GMC Canyon, or Honda Ridgeline. But one thing that separates it from its competitors is its price. The Frontier is a popular choice for price-conscious midsize truck buyers, as it is way cheaper compared to its competition.

Please visit BE FORWARD and check out our list of 100+ used Nissan Frontiers on sale.