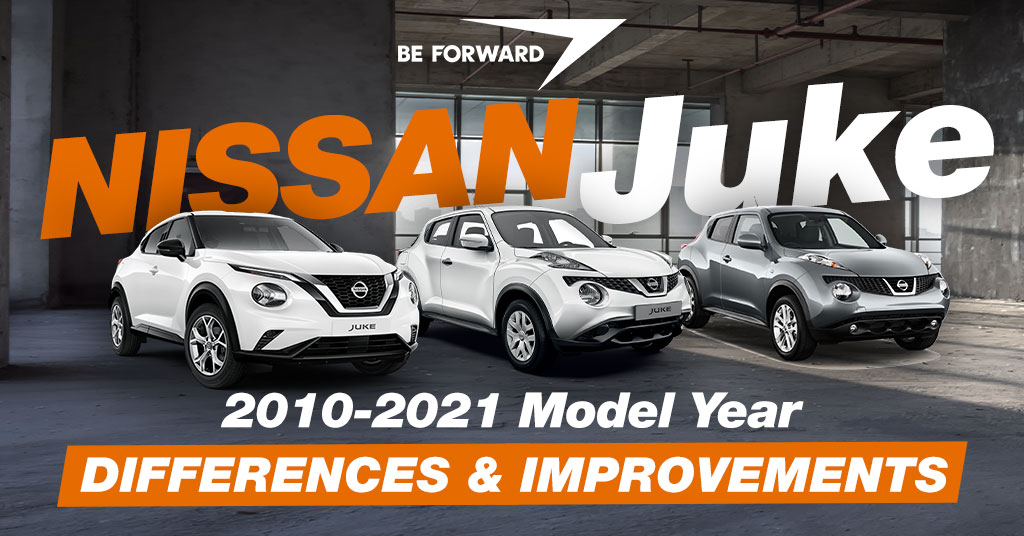 The Nissan Juke is a subcompact crossover SUV manufactured and marketed by the Japanese automotive manufacturer Nissan since 2010 and still in production.

The Juke first appeared as the Nissan Qazana concept at the 2009 Geneva Motor show. In 2010, the production of the subcompact SUV commenced at the Nissan Motor Manufacturing Ltd plant in Sunderland, UK.

The “Juke” name was derived from a word commonly used in sports “to juke” which means “to make a sham move to mislead an opponent” or “to change directions demonstrating agility” or “to turn/bend quickly to avoid someone/something”. Given the Juke’s odd design, small frame, and energetic/lively engine options, then the name definitely makes sense.

So we can say, Nissan “Juked” the auto industry with the introduction of this small crossover vehicle which was unusually designed but introduced some fresh ideas for the market.

The first generation Juke F15 arrived in stores in September 2010. It was built on Nissan’s B-Platform for compact and subcompact cars.

The exterior looks of the Juke feature an odd design with L-shaped lamps installed above the grille which at first people thought were the headlights, but no, those are turn signals and position lights. The headlights are the big, round units placed in the bumper, on the same level as the chromed V-motion Nissan badge. From the sides, the Juke features a hatch-back inspired body design, with a sloppy roofline that runs from the windscreen and ends at a small spoiler on top of the rear liftgate.

Inside, a color-keyed center console that resembles a motorcycle gas tank houses the gear shifter. The clear and sporty instrument cluster houses a speedometer, tachometer, and a small digital display in between that displays the trip odometer, odometer, and real-time fuel efficiency.

The Juke comes with five seats, with two at the front and three at the rear. It has a small (297-liter) cargo area that can be expanded to 1016 liters by folding down the 60/40 split rear seats. The floor front-wheel-drive models have additional storage beneath the cargo area.

The center console contains the radio and Nissan’s I-CON control (optional). Standard features (depending on market and model) of the Juke include iPod connectivity, rear-view camera, USB, NissanConnect GPS navigation, and Bluetooth connection.

With exception of the base models, all Juke’s come fitted with Nissan’s Integrated Control System (I-CON) which manages the vehicle’s drive mode (Normal, Sport, or Eco) and climate control.

In 2014, at the Geneva Motor Show, Nissan unveiled a facelifted Juke for the 2015 model year. This release featured a few exterior cosmetic changes and the addition of new standard features. Exterior changes include the revision of L-Shaped lights which now feature LED Daytime Running and turn signals, a redesigned front and rear bumper, and new color options. Standard equipment on this release included a rear-view camera, Bluetooth hands-free phone system, and keyless entry.

The Juke is available in front or all-wheel-drive systems. It came fitted with engines supplied by either Nissan or Renault.

The JUKE-R was unveiled as a one-off concept car in January 2012 in Dubai. But once it was unveiled, it sparked interest with several genuine offers that led to Nissan producing a limited number. Originally Nissan planned to produce between 17 and 23 units but eventually ended up producing only five.

The Juke-R is a modified, re-sculpted, and muscular Juke with the underpinnings of a Nissan GT-R. The Juke-R comes fitted with Nissan GT-R’s twin-turbo 3.8-liter V6 engine with 545 hp. The Juke clocked 0-100 kph in an estimated 3.0 secs and a maximum speed of 273 kph.

In 2013, Nissan introduced the NISMO version of the Juke with styling changes to its interior, bumpers and side skirts, a modified steering wheel and suspensions, new 18-inch wheels, engine tuning, and “torque vectoring” option.

The base Juke NISMO comes fitted with a turbocharged 1.6-liter DIG-T inline-4 petrol engine with 197 hp and 184 lb-ft of torque.

The high-end Juke Nismo RS has improved standard equipment such as Recaro front seats and carbon fiber. It also features an upgraded engine with 215 hp and 210 lb-ft.

Nissan unveiled the second-generation Juke F16 in September 2019 as a 2020 model across several European cities, and production began in October 2019.

The release is based on a new CMF-B platform that made the car vehicle much larger. This new platform features extensive use of high-strength steel that is said to offer better performance, stability, handling, and cornering capabilities while at the same time enabling the car to be 23 kg lighter than the previous model.

The overall growth in the car size has benefited Juke with better rear-seat knee room, better rear headroom, and the boot grew from 297 liters to 422 liters with rear seats in place. The dashboard layout also changed on Juke F16 with the introduction of a ‘floating’ central display, a less cluttered center console, and a new multifunctional steering wheel.

Features available on the J16 Juke include a Bose Personal Plus sound system with 8 powerful speakers and 2 lightweight UltraNearfield speakers on the front headrests, an 8-inch touchscreen Nissan Connect infotainment system with Apple CarPlay or Android Auto. Optional features include an onboard wireless hotspot, TomTom maps, and Live Traffic.

As of December 2021, the J16 Juke is available with only one engine option. It’s fitted with a turbocharged 1.0-liter (HR10DDT) inline-3 petrol engine with 115 hp. This engine is mated with either a 6-speed manual or a 7-speed dual-clutch transmission. The J16 Juke was only available in front-wheel-drive versions at launch.

The Juke has been around for eleven years, two generations, and plenty of units sold, but still, it stands out on our roads with nothing else like it. The first generation’s Juke’s swooping roofline, bold nose, and unique profile made the Juke a polarising love-it-or-hate-it distinctive subcompact crossover SUV.

Before the Juke’s arrival, crossovers were normally bigger cars, but the Juke brought a new definition with its compact dimensions even though it meant the Juke is compromised, but still there are plenty of owners given a chance will still opt for the Juke.

Despite Juke’s polarised opinions with its unorthodox design, but it’s still a great used buy with plenty to like.

Please visit BE FORWARD and check out our list of 400+ used Nissan Juke for sale.