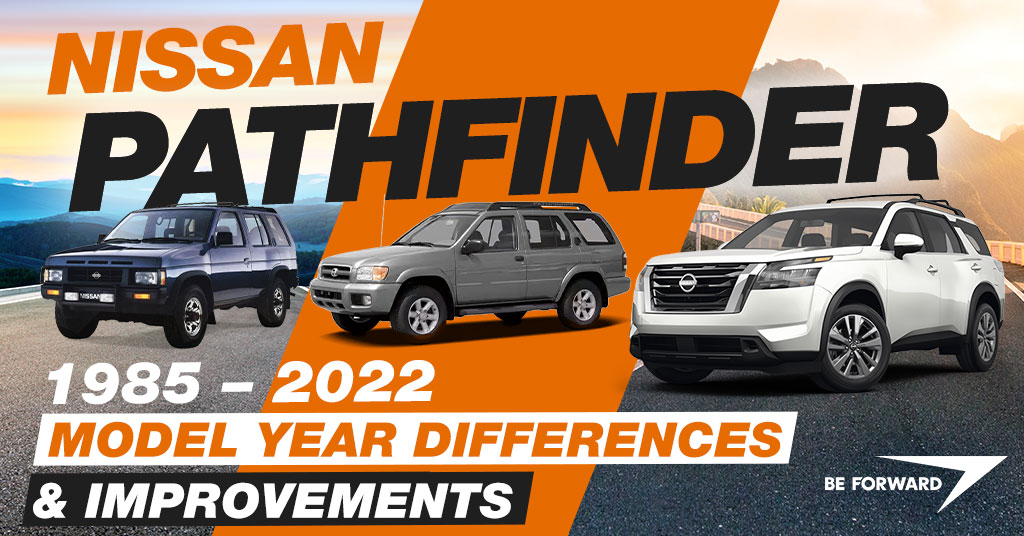 The Nissan Pathfinder is a midsize sport utility vehicle (SUV) manufactured by the Japanese automotive company Nissan since 1985. The Pathfinder was initially based on the Nissan Hardbody pickup truck platform. Five generations of the Pathfinder have been released to date, with the fifth and current generation model introduced in 2021.

The Pathfinder was sold and marketed as the Nissan Terrano, in markets other than North America. From 2004, with the release of the third generation (R51) model all markets adopted the Pathfinder name.

In this article, we will briefly dissect the Pathfinder to learn a little about its strength and evolution to gain some useful understanding of the car. Please follow through.

The first generation Pathfinder/Terrano (WD21) was unveiled in 1985 for the 1986 model year. The original Pathfinder was a two-door body-on-frame SUV designed based on the Nissan Hardbody pickup platform. The Pathfinder shared similar styling and components with the pickup including three horizontal slots on the hood’s front edge just above the grille, rectangular headlights, and an airy and comfortable interior.

In 1990, the Pathfinder was facelifted and the major changes were the introduction of the two rear doors with concealed C-pillar handles that became a signature of the Pathfinder to date. These hidden rear door handles made the Pathfinder look like a two-door pickup truck with a camper shell.

Under the hood, the Pathfinder came with a choice of one of two engines. The base engine was the 2.4-liter 4-cylinder petrol with 106 hp and the other was a 3.0-liter V6 petrol engine with 140 hp. The V6 engine was tuned in 1988 which resulted in its power increasing to 153 hp, then it was further tuned in 1990 with its output now at 153 hp. Some markets had the option of a naturally aspirated or turbocharged 2.7-liter (TD27) 4-cylinder diesel engine with the turbocharged version producing 100 hp and 159 lb-ft of torque. These engines were mated with a 4-speed automatic or 5-speed manual transmission. All WD21 Pathfinders came in a 2WD/4WD drivetrain configuration, with 4WD manually engaged when needed.

The second-generation Pathfinder/Terrano (R50) was unveiled in 1995 for the 1996 model year. The 1996 Pathfinder’s styling was totally revised, it came with a unibody frame, unlike the previous model’s body-on-frame construction. The new design distinguished the Pathfinder from the Hardbody pickup, while also making the car more aerodynamic.

The interior is well designed, spacious, and comfortable, with occupants treated with plenty of refinements and comfort.

In 2000 and 2001 the R50 Pathfinder received a mid-cycle facelift. The 2001 Pathfinder was available in three trims: the base XR, the SE, and the topline LE.

Standard features on the XR included power windows and mirrors, ABS, and 16-inch wheels, while options included a premium Bose sound system, fake wood accents, a navigation system, side airbags, a mobile entertainment system, and fog lights depending on trim.

The third-generation Pathfinder (R51) was unveiled in 2004 for the 2005 model year. The car was completely redesigned, it was built on Nissan’s F-Alpha platform which meant the car returned to the original body on frame construction. It was available in XE, SE, SE Off-Road, and LE trims.

In 2005, the car received a mid-cycle refresh with its dimensions increased, and a third-row seat was introduced making the car a seven-seater.

The fourth-generation Pathfinder (R52) was unveiled in 2012 for the 2013 model year. Like the second-generation model, this model resorted back to a unibody frame.

The exterior design was no longer boxy, it’s curvaceous, lower, and wider compared to the previous model. Although this Pathfinder still looked like an SUV, it’s a little more swept-back and rakish, and does not resemble previous Pathfinder models. This model got rid of the signature hidden c-pillar rear door handles.

Inside, the 2013 Pathfinder‘s cabin is well put together with fine and quality materials. The premium Platinum trim has plenty of high-end finishes and accents.

The2013 Pathfinder came fitted with a 3.5-Liter (VQ35DE) V6 petrol engine with 260 hp and 240 lb-ft of torque. This engine was mated with an automatic or CVT transmission.

The fifth-generation Pathfinder (R53) was unveiled in 2021 for the 2022 model year. This model like the previous is built on Nissan’s D-platform with a unibody frame.

The exterior of the 2022 Pathfinder is rugged and smooth. Its facial features a huge V-motion grille with horizontal black plastic slats surrounded by a deep chromed rim and narrow headlights with two LED daytime running lights above, while at the bottom it features a wrapped-around bumper. On the sides, the designers created a floating roof impression by making use of black B- and D-pillars, with the C-pillar surrounded by black privacy glass and a black upper side.

Inside, the 2022 Pathfinder like the previous model is still a seven-seat car but with better space as a result of the car’s growth in size. The second-and third-row seats can fold flat to create enough room to carry a 4×8 ft cargo. The dash is simple and neat, it is fitted with an 8.0-inch touch-screen infotainment system with Apple CarPlay and Android Auto as standard while the driver is treated with a 10.8-inch digital instrument cluster display.

The 2022 Pathfinder comes fitted with the previously used 3.5-liter (VQ35DD) V6 petrol engine with 284 hp and 259 lb-ft of torque. Power to the wheels is transferred via a 9-speed automatic transmission. The car also came fitted with a new terrain-management system, called Intelligent 4WD, with 7-position (Drive and Terrain Mode Selector) management settings.

From this article, we have seen that after thirty-five odd years on the market, the Pathfinder continues to make strides. From a car derived from its pickup sibling to a car that is comfortable, reliable, durable, and a people mover.

We at BE FORWARD have a stock of 80+ used Nissan Pathfinder and its Terrano sibling listed for sale on our stock. Please visit our website and find your next car.