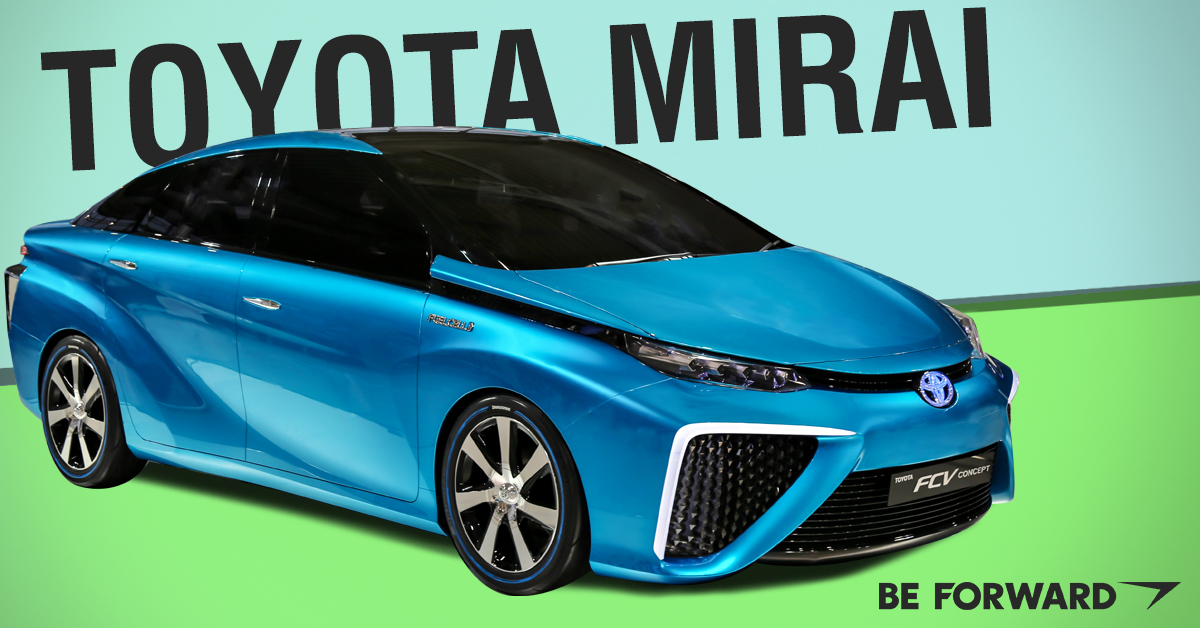 It is a well accepted fact that fossil fuels are finite and burning them is detrimental to our environment. Automakers, being aware of both facts, have been trying to tackle the issue of alternative fuels for several years. One way to do so is with fuel cell vehicles that are powered by hydrogen. Ever on the cutting edge, Toyota began selling a hydrogen fuel cell car in Japan in December of 2014 and has recently released the vehicle for limited sale in North America. Known as the Mirai, it is considered to be the first commercially available hydrogen fuel cell vehicle. Before we get our cart in front of the horse, let’s have a look at hydrogen as a fuel, then get into a quick review of the Mirai. 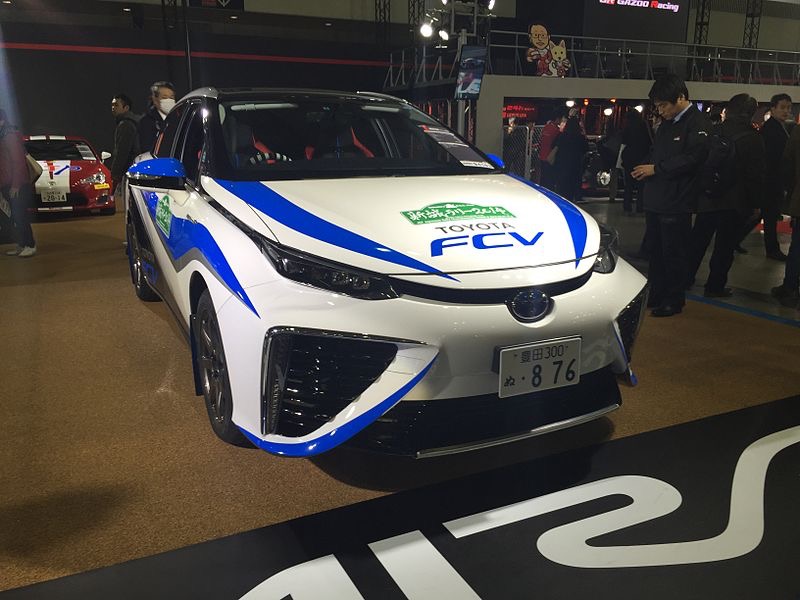 A simple hydrogen refueling station can take rainwater and convert it to the hydrogen fuel needed by cars. The conversion process can be done using solar cells to power the refueling point, nearly eliminating fossil fuels from the equation. The main drawback to hydrogen as a fuel source is a lack of infrastructure. There are only 10 stations in Japan at this time. In the U.S., there are just twenty refueling stations throughout the country. California is the leader in the arena, with ten stations along the Hydrogen Highway created by former governor Arnold Schwarzenegger.

Mirai translates from Japanese as ”the future.” That is a more than apt name for a vehicle that runs on a renewable fuel source, gets 79 mpg-imperial and produces zero emissions; well it produces water at the tailpipe, but that doesn’t count as far as environmental agencies are concerned. It is touted as the first commercially available hydrogen fuel cell vehicle in the world. Toyota distinguishes it as such by pointing out that the Honda FCX Clarity and the Hyundai Tuscon FCEV are available by lease only and remain the property of the maker at all times. A pretty fine distinction, but marketing is marketing. Let’s have a look at the car itself, shall we?

The Mirai is only available as a sedan only and is limited to a single trim level. Expected interior features should include dual-zone automatic climate control, cloth upholstery with neoprene look, a 203 mm touchscreen, heated power front seats, heated rear seats, a heated steering wheel, and a rearview camera. The included navigation system has a built in fueling point finder. The JBL sound system includes: Bluetooth audio, phone connectivity, satellite radio, a USB port, and an auxiliary jack. Toyota is also offering 24-hour concierge and roadside service, three years free maintenance, and an 8-year/100,000-mile limited warranty as part of the North American release. All of these items are standard equipment. Toyota offers a single option:  a power system that can be used as a generator. The trunk-mounted system has the potential to provide 60 kilowatt-hours of electricity. Enough to power everything in a small home for nearly a week, in an emergency.

Alright, so how does the Mirai get power from the fuel cell to the wheels? Hybrid technology. The proprietary fuel cell stack converts hydrogen to electricity. The drive wheels are powered by an electric motor that is rated for 151 bhp and 335 Nm of torque. The Mirai incorporates a 1.6 kWh nickel-metal hydride battery to store power. At nine seconds, the Mirai’s 0-100 km/h time is about as impressive as riding a tricycle, but it does have a rated top speed of 179 km/h. The Mirai has a range of 503 km per tank and is rated at 79 mpg-imperial. 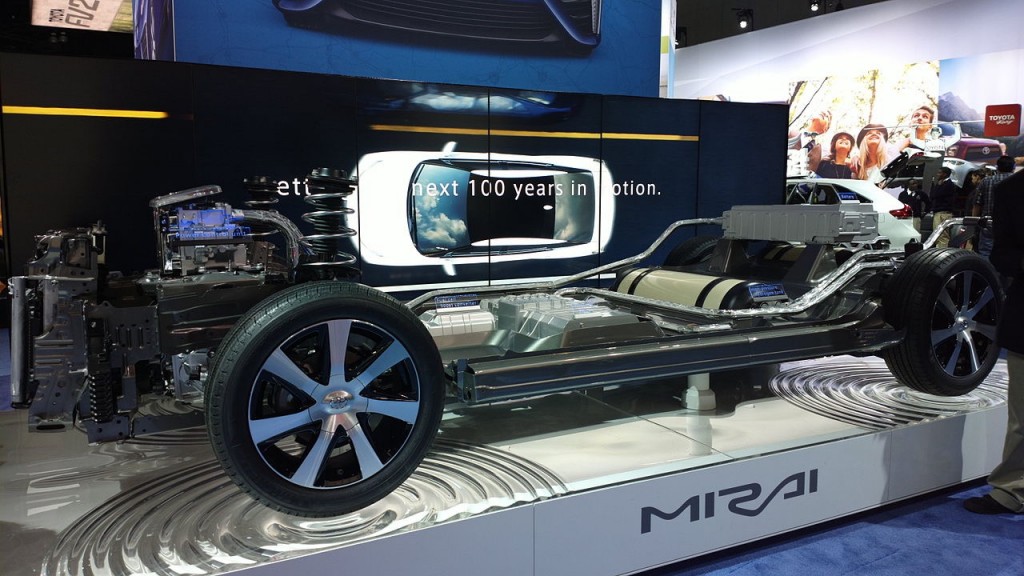 Driver and passenger safety is always a concern when a new vehicle is released. The standard safety equipment of the Mirai includes: traction control, stability control, front and rear side airbags, the rearview camera mentioned earlier, and antilock disc brakes. The Mirai incorporates multiple active safety equipment systems to offer blind spot monitoring, lane-departure alert, adaptive cruise control, as well as frontal collision mitigation. A hydrogen leak could be dangerous, so sensors will close the fuel cell’s stop valves in case one occurs.

Given the high price tag of a Mirai, Toyota anticipated that buyers would want a comfortable cabin space. To that end, the automaker has provided a Lexus quality interior. Soft materials abound in any area where a person may come in contact with the vehicle. The seats are roomy enough for the average size adult, but a center console runs through the rear seats, limiting the Mirai to just four occupants. Because the Mirai was designed to be a fuel cell vehicle, the hydrogen system and battery are well concealed and do not intrude into the cabin or trunk space. 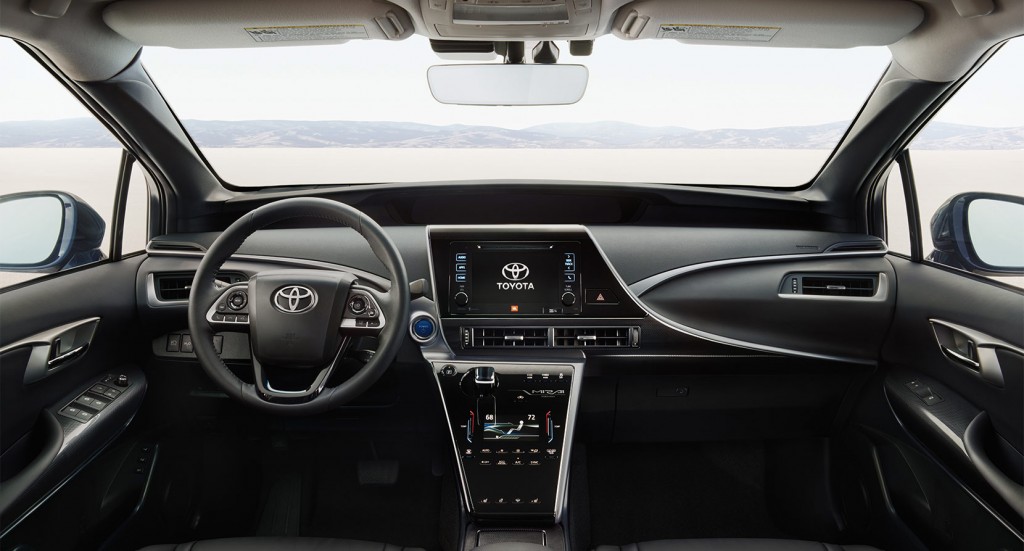 Instrumentation is user-friendly and driver-centric. The placement of the instrument panel will take a little time to adjust to, though. It is located at the top of the two-tier dash as opposed to being behind the steering column.

What To Expect While Driving

The Toyota Mirai is not a car you buy if you want to tear through turns. It is a slow, deliberate, eco-friendly option. Like all electric cars, the full torque potential of the Mirai is available the instant you touch the pedal. That can make it feel quick from the start, but that feeling passes as you reach 60 km/h. If you need to pass someone on the open road, leave a lot of extra room because the Mirai is very sluggish past 60 km/h! In turns, the low slung weight of the Mirai gives it a feeling of strength and stability that some electric cars lack. Toyota fitted the Mirai with a limited regenerative braking system, so it will not begin to stop itself as soon as you take your foot off the pedal as other electric cars do, eliminating the sudden jerking associated with the vehicle class. You can also expect a very quiet interior, on par with top luxury vehicles.