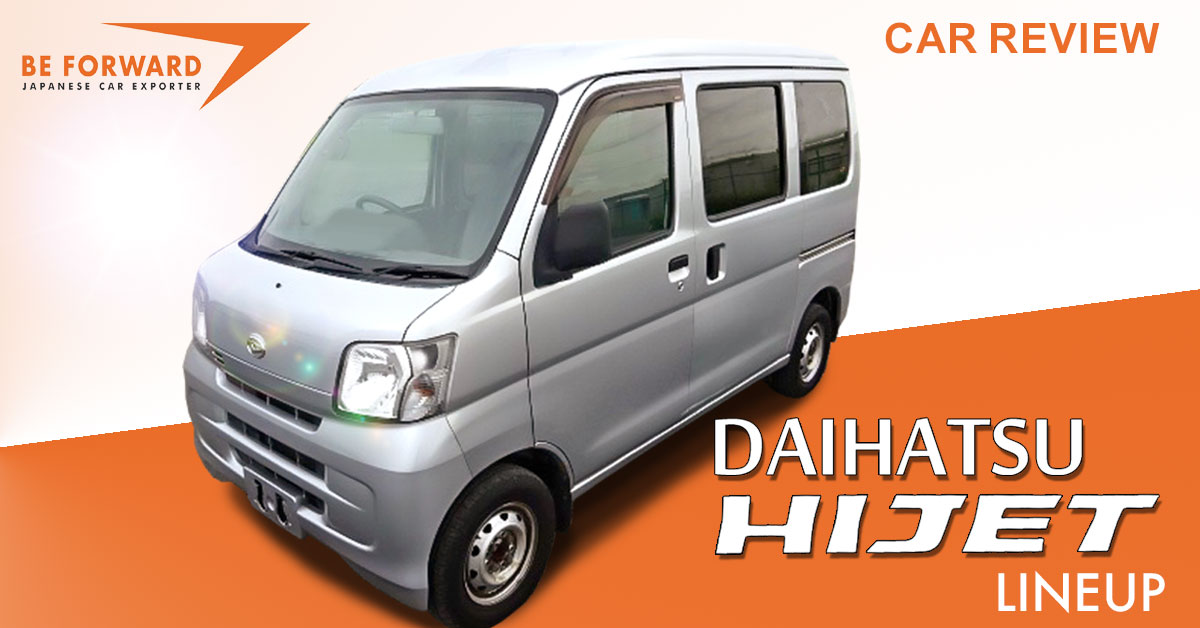 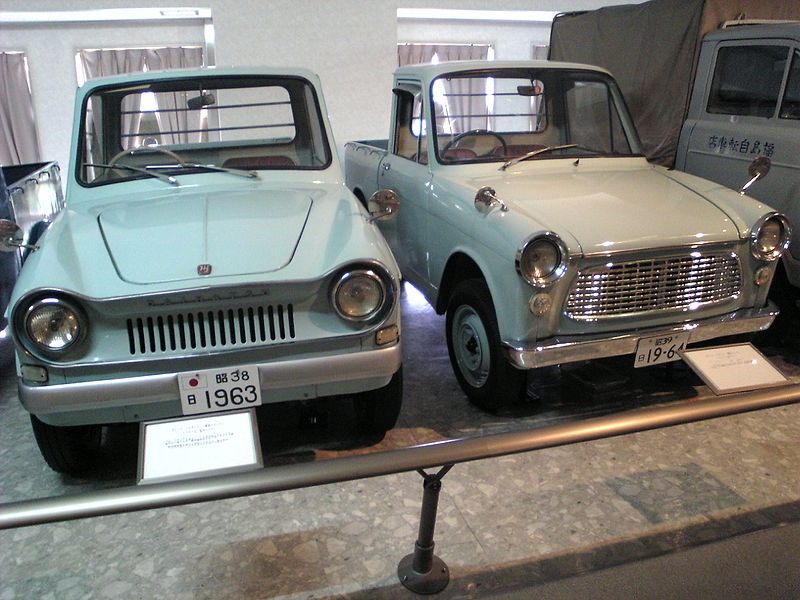 A fleet and delivery service is only as good as its vehicles. If your fleet of cargo vans and trucks is always broken down, your service will be slow and unreliable. That is why it is essential to buy the best vehicles, whether they are new or used.

One of the more reliable options for your cargo fleet is the Diahatsu HiJet lineup of microvans and Kei trucks. The size of these vehicles offers a great deal of flexibility for services that work in crowded urban settings, but have the durability to last in more rural settings. Let’s have a look at the history and evolution of the Daihatsu HiJet line, then a  look at the current models available.

History of the Daihatsu HiJet

Daihatsu introduced the HiJet Kei truck for the 1960 model year. The enclosed cargo van version arrived at the end of 1960 for the 1961 model year. These first trucks and vans were equipped with 356 cc two-stroke engine, meeting the Kei regulations of the era. The engine was mated to a three-speed manual gearbox and had a limited cargo weight capacity. The trucks were quite effective and durable, allowing the Daihatsu to expand its market. The limited cargo capacity of the Kei regulations led Daihatsu to introduce the heavier duty New-Line, model codes L50P/L50V, in early 1963. The New-Line had a cargo capacity of 500 kg and was longer than the HiJet. These dimensions and an 800 cc engine pushed the New-Line outside of the Kei regulations of the time, so owners had to pay penalty taxes and insurance rates. These added costs handcuffed the sales of the New-Line and production of the first generation New-Line ended in 1966.

The second generation of the HiJet line saw a switch from standard cab to a cab-over approach. This allowed Daihatsu to offer more cargo space, yet stay within the Kei regulations at the time. The 356 cc engine and three-speed manual gearbox were carried over from the first generation. The main exception was that all engines were water-cooled instead of the early air-cooled versions that were available.

The New-Line was replaced by the New-Line Cab. The New-Line Cab offered buyers the option of an 800 cc or a 1,000 cc petrol engine. While it remained outside of the kei regulations, the added cargo space and more powerful engine options allowed sales of the New-Line Cab to exceed those of the first generation New-Line. 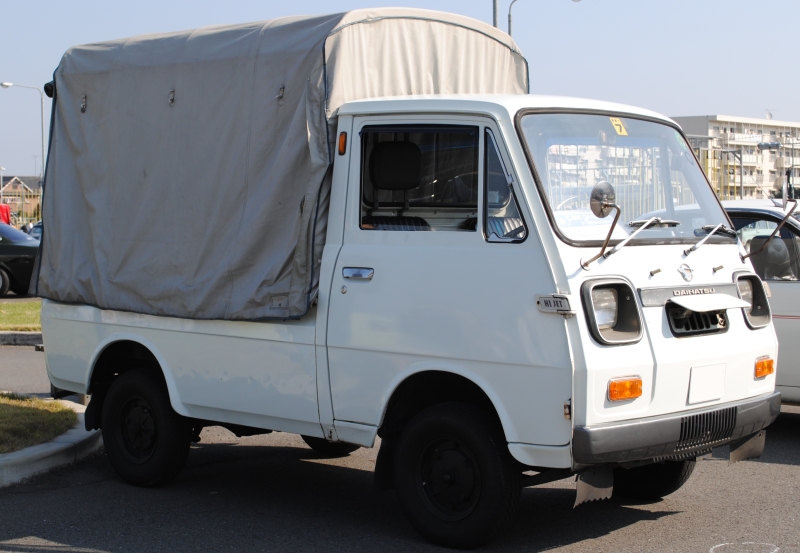 The S37 generation of the HiJet was a very mild body refresh of the second generation. It was given a more box-like appearance and the doors were hinged differently. In prior years, the door hinges had been on the rear of the door. The third generation doors were hinged in the front, allowing more traditional ingress. The 356 cc engine was carried over as Kei regulations required, but the gearbox was upgraded to a four-speed manual for better fuel efficiency. The third generation was the first to offer an all-electric truck and van.

The fourth generation of the HiJet Kei truck appeared at the end of 1971 for the 1972 model year. The fourth generation was a complete refresh, including all new sheetmetal and a live, leaf-spring rear suspension. Daihatsu introduced the van version of the fourth generation in February of 1972. The van featured sliding side doors and a top-hinged tailgate. The 356 cc engine and four-speed manual gearbox were retained until 1976, when the Kei regulations were changed.

The fifth generation of the HiJet was sold alongside the fourth generation. Often referred to as the HiJet Wide 55. The Wide 55 was 100 mm wider and 150 mm longer than the HiJet 550 and offered a more powerful engine. Other than badging, the Wide 55 looked very similar to the 550. 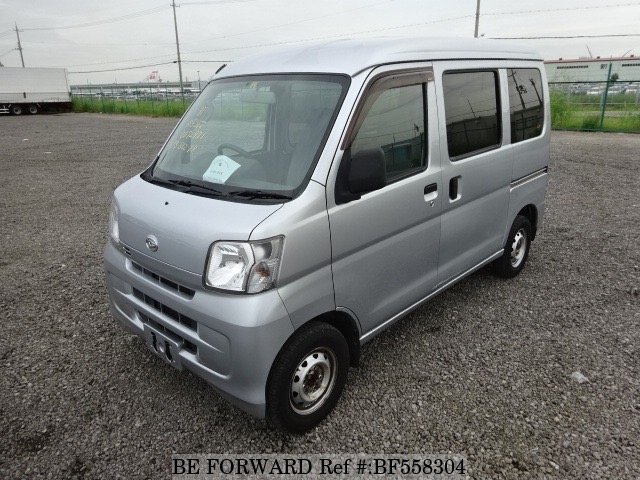 The Daihatsu HiJet has closely followed the Kei regulations within the Japanese market. The similarity between the generations are why we cut the history a tad short, moving directly to the current generation. There have been several non-kei trucks and vans introduced for export, but the Kei version has been the best selling version of the HiJet in its home market.

The HiJet is currently in its tenth generation. Model codes are S320, S330, S500, and S510. The various iterations of the HiJet, including the passenger van Daihatsu Atrai, can be powered by a 660 cc Turbo engine that offers owners 63 bhp. The current generation of the HiJet is also marketed as the Toyota Pixis Van and Truck.

The Daihatsu HiJet is generally regarded as one of the best Kei truck and kei van options in the Japanese market. The entire lineup is know for its durability, efficiency, and exceptional cargo space. You can not go wrong when adding a Daihatsu HiJet to your fleet.