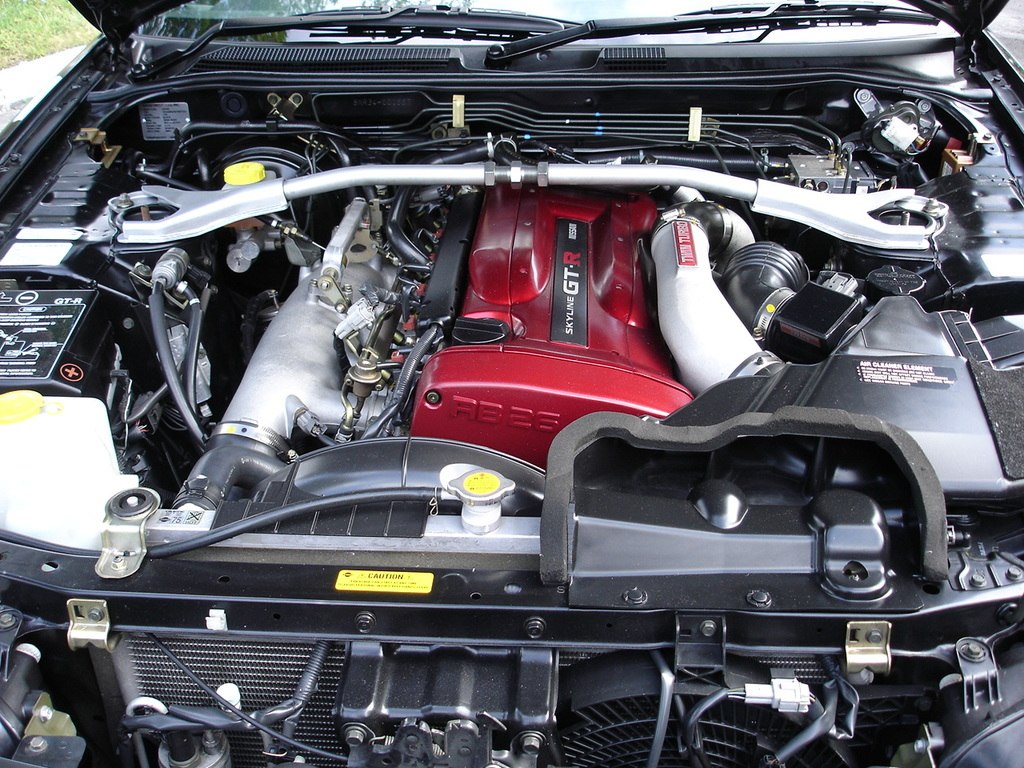 The RB engine is an engine found on Nissan Vehicles. It is a 2.0–3.0 L straight-6 4-stroke petrol engine produced from 1985 to 2004 and after a 15-year hiatus, the production continued in 2019. Both Single Overhead Cam (SOHC) and Double Overhead Camshafts (DOHC) versions have an aluminum head.

The DOHC versions have 4 valves per cylinder and the SOHC versions have 2 valves per cylinder and each cam lobe moves only one valve. All versions of RB engines have a cast-iron block and belt-driven cams. Most turbo versions have an intercooler turbo (except the single-cam RB30ET & RB20ET engines) and most RB engines have a recirculating factory BOV (blow-off valve) to reduce compressor surge when the throttle quickly closes. The RB engine is derived from the 6 cylinder Nissan L20A engine which has the same stroke and bore as the RB20. All RB engines were manufactured in Yokohama, Japan where the new engine of VR38DETT is now in production. Some variants of RB engines were rebuilt by Nissan’s NISMO division at the Omori Factory in Tokyo as well.

There are five versions of RB engines with the following details of stock dimensions for the Nissan RB Engine:

The RB20 engine which is a 2.0 L 1998 cc is the first engine to be fitted to the HR31 Skyline and the Nissan Fairlady 200ZR (Z31 chassis) manufactured from August 1985. The twin-cam engines featured the Nissan Induction Control System (NICS) injection system, while the later twin-cam engines used Electronic Concentrated Control System (ECCS). Later versions used Electronic Concentrated Control System (ECCS) engine management, discarded the twelve tiny runners for 6 much larger ones. It was also fitted to the C32, A31 Cefiro, and C33 Laurel. The Fairlady 200ZR was fitted with an intercooler Nissan Induction Control System (NICS) type RB20DET.

The early RB20E engine was used in the C32 Nissan Laurel, produced from October 1984. Laurel is the second (1989–1993) series RB20E/DE/DET used on R32 Skyline & Cefiros. The second series had an improvement in head design and used the Electronic Concentrated Control System (ECCS) injection system. Nissan Skyline 2000GTS-R (HR31) used this RB20DET-R and was limited to 800 units.

There are varieties of 2.0 L RB20 engines manufactured such as the following:

In the GTS-25 R32 Nissan Skyline, the RB25 series was fitted RB25DE and DET engines manufactured from August 1993 also featured Nissan Variable Cam System (NVCS) for the intake cam. This gave RB25DE torque at lower rpm and more power than the previous model. From 1995, the RB25DE and RB25DET had an amended electrical system (ES) and the turbocharger on the RB25DET had a ceramic turbine wheel rather than aluminum. The changes introduced the ignition coils with built-in ignitors, therefore the coil ignitor on previous models was not used. Other changes were engine ECU, different airflow meter, cam angle sensor, and throttle position sensor.

There are eight cars powered by the Nissan RB Engine:

The R31 Skyline series was the 1st generation of cars to use the RB-series of engines.