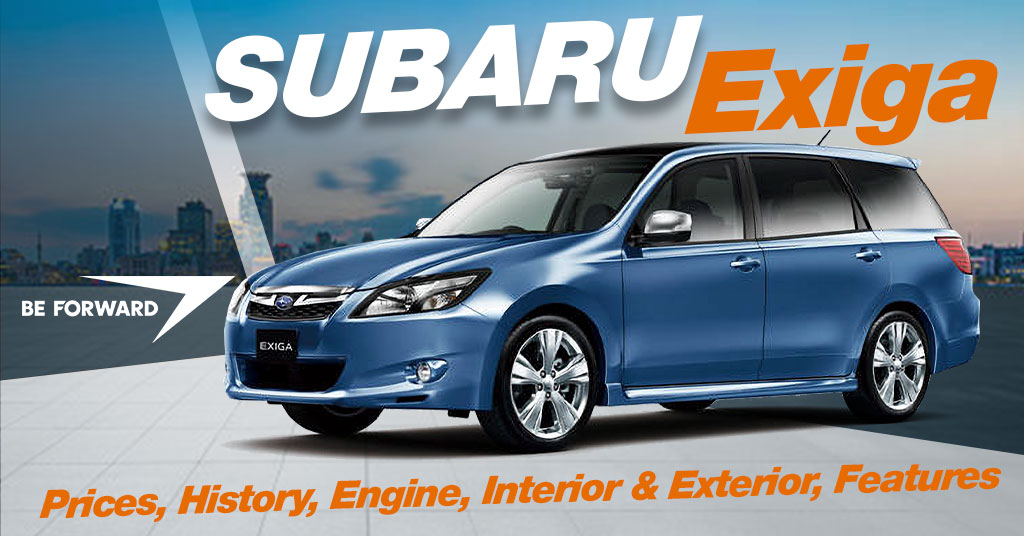 Subaru Exiga is a 7-seater compact multipurpose crossover utility vehicle (CUV) that was manufactured by the Japanese automaker Subaru in 2008. The Exiga is based on the concept of a 7-seater for touring experience with panoramic visibility and offering a pleasant journey and a safe ride for its occupants.

The Exiga offers an open and comfortable interior whereby all passengers can easily engage in conversation and share their touring experience with great views enhanced by dramatic wide-angle views through the windows.

The Exiga has undergone several upgrades and releases over the years. In 2009, the Exiga was drastically modified with the introduction of advanced driving support system “EyeSight” technology, followed by minor modifications in 2010, 2011, and 2012.

The Subaru Exiga was in production for only 1 generation known as the YA series that was in production from 2008 – 2018. It’s built on the acclaimed Subaru Legacy chassis that employs valve damping shocks at the front and a double-wishbone at the back suspension giving it excellent handling characteristics. The design is similar to the Legacy but with significant differences in the back.

The interior of the Exiga is spacious, thanks to its long wheelbase (108.3 in), a tall roof (65.4 in), and double-wishbone suspension architecture at the rear that gave room to the third row and a big boot. The Exiga is one of the few cars in its category that can comfortably accommodate a 6-foot adult on the third row.

There are numerous storage partitions in the cabin that are good for storing items such as beverages, smartphones, handbags, goggles, etc. In the first row, there is door panel storage, 4 cup-holders, a storage shelf below the dashboard, the center box, and a glovebox. For the 2nd row, the storage is on the front seat jacket pockets. For the 3rd row, there are 2 cup holders.

The vehicle claims theater-style seating and supersized panoramic glass roof with back passengers sitting slightly higher than those in front. Seats in the concept vehicle were dressed in leather and trimmed in blue and pearl white. The back seat incorporates fold-down tray tables, similar to those on airplanes.

The instrument panel in the concept vehicle offered displays from 8 monitors, provided excellent visibility around the vehicle, and housed a clear blue multi-display zone. There is indirect lighting in the ceiling in the production vehicle, and the side doors providing soft ambient light at night.

The cargo area has a covered stacking approach, allowing items to be placed under the floor.

The exterior of the Exiga resembles the fifth iteration Subaru Legacy wagon but is slightly shorter and narrower. At the front, the Exiga features a large chrome grille and projector-style headlamps. Two catalytic converters installed tandemly to control emission levels resulted in two exhaust pipes placed on the left and right below the rear bumper.

The Subaru Exiga has an old-school exterior but a stylish interior. It has some similarities with the Legacy, especially at the front.

The Exiga has a good safety rating. It comes with side and curtain airbags for some of the trims, Electronic Stability Control is found in most Exigas, and Electronic Brakeforce Distribution (EBD) is standard. Eyesight camera-based assistive technology is present on later models, which includes Adaptive Cruise Control, Lane-keeping Assist, and Autonomous Emergency Braking. 2 airbags are used for front passengers, supplemented with first-row side-impact and additional side curtain airbags for first and second-row passengers. The seats utilize impact-absorbing and anti-whiplash technology. A collapsible brake pedal is included to reduce the chance of foot injury in case of a collision. There are no air conditioning outlets for the second and third rows but the front outlet is designed to allow the air further along with the ceiling of the vehicle. Also, indirect blue LED lighting was installed in the overhead console, footwells, and center tray.

The Subaru Exiga price is affordable compared to the features offered. The price of used Subaru Exiga in the market varies from version, trim, and dealers while prices are reflective of average BE FORWARD prices as of July 2021 starting from USD 1,130.

One of the strengths of the Subaru Exiga which sets it apart from its rivals is its superb handling. On the road, it drives so smoothly that you will be mistaken to think it’s a hot hatch. The 2.0GT particularly does not disappoint with its high-quality ride and quick acceleration.

The Subaru Exiga is the best family car that is suited for urban cruising. Even though it’s not the most fuel-efficient car, it still manages to return a decent Km/L.

There’s no reason as to why you should not consider buying this Subaru Exiga as it will redefine your driving experience and comfortability. For a faster purchasing option, give the Subaru Exiga a try by simply visiting BE FORWARD to enjoy the boxer engine experience.

ALL SUBARU EXIGA FOR SALE