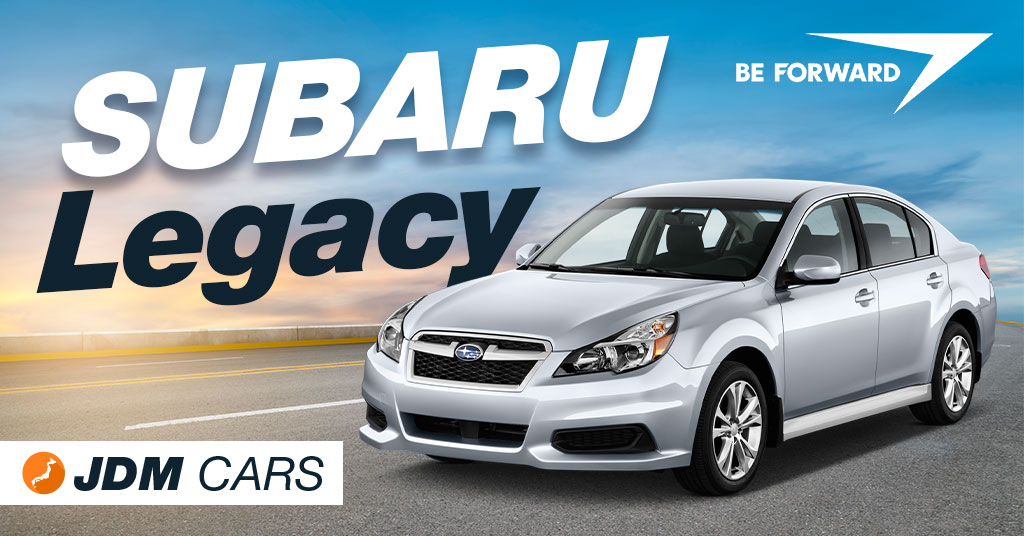 Subaru Legacy is a midsize car manufactured by Subaru from 1989 to the present. The Subaru Legacy is Subaru’s flagship car, currently in its seventh generation with over 3.6 million units sold. Like most Subarus, the Legacy comes in all-wheel drive as standard and is equipped with the traditional Subaru Boxer engines.

In 1996, a variant of the Legacy with better ground clearance was introduced to compete in the rapidly growing SUV market. This variant was known as the Legacy Outback. The Legacy Outback was a success especially in the American market and by the year 1994, it was detached from the Legacy lineup and began being sold as Subaru Outback.

Subaru Legacy B4 and Touring Wagon

The fourth-generation (2004-2009) Subaru Legacy was released in 2003. The 2004 Legacy (B4 and Touring Wagon) came with a redesigned chassis that was much stiffer compared to the previous models.

In 2008, Subaru announced the EyeSight models that made use of 2 CCD on either side of the rear-view mirror with the capability to judge distances of objects and keep tabs on the driver. The system had the ability to assist the driver to maintain distance on highways, and the Legacy was also fitted with the LDWS (lane departure warning system) that alerted the driver when the car was moving out of lane and pedestrian detection.

Manual transmissions came with a center differential, while automatic transmission models made use of an electrically controlled clutch which provides power to the rear wheels. The Legacy was fitted with McPherson strut front suspension and multi-link rear suspension.

The Touring Wagon has a 459-liter boot space and has the option of split-folding the rear seats which increases the boot space to 1628 liters, while the Sedan has a 433-liter boot. The Fuel tank capacity of the Legacy is 64-liters.

This generation’s Legacy won several awards such as 2003 Car of the Year (both B4 and Touring Wagon), Automobile Magazine awarded the Legacy B4 the 2005 Automobile All-Stars for All-Star Family Car, and the American produced Subaru Legacy won the 2005 Road and Travel Magazine International Car of the Year for Most Dependable sedan.

The fourth-generation Subaru Legacy (B4 and Touring Wagon) offered an upgraded 4-cylinder boxer 2.0-liter (EJ20), 2.5-liter (EJ255), and a 6-cylinder 3.0-liter (EZ30) engine. The 2.0-liter and 2.5-liter engines won the 2006 Engine of the Year awards in the 2.0-liter and 2.5-liter categories. The 2.0i trim is the base model, it’s fitted with the EJ20 SOHC engine which offers an average power of 105KW (138 HP), and the 2.0R trim is fitted with a DOHC engine with an average power of 123KW (163 HP). The turbocharged EJ20 DOHC engine installed in the 2.0GT trim produces 209KW (276 HP). Due to turbocharging technological advancements and tighter emission controls, Subaru replaced the twin-turbo setup with a twin-scroll turbo and the AVCS (Active Valve Control System). The 3.0R trim is powered by the new 187KW (247 HP) 6-cylinder EZ30 engine. In this generation, Subaru made use of 5 or 6-speed manual, semi-automatic, 4 or 5-speed automatic, and CVT transmissions.

The Subaru Legacy 5th generation is by far larger and spacious than the previous generations. Cheers to its length, the Legacy now boasts the best headroom and legroom in its category. The cargo space has been reduced to free up space for seating and this has made a big difference. In the first row, both the passenger and driver are afforded excellent legroom. The seats recline far back enough to accommodate even the tallest people. We recommend the automatic seats as they are more comfortable and functional than the manual seats. In the second row, the seats offer great legroom, but the middle seat legroom is limited due to the presence of the transmission tunnel.

Cabin storage is vital for storing items such as smartphones, beverages, goggles, handbags, etc. For the 1st row, there is a storage shelf below the dashboard, door panel storage, 2 cup holders, a glovebox, and the center box. For the second row, there are seat pockets, door pockets, and 2 cup holders.

In this model, for the first time, Subaru has introduced some new features such as side window frames (how do they relate with transmission and engine?), lineartronic CVT transmission, and electric parking brake. There are some improvements on the chassis too, as Subaru made use of their Dynamic Chassis Control Concept that makes use of high-tensile steel in critical areas to improve strength with lighter weight. On this model, a rubber cradle mount has been introduced on the front-end structure to separate the suspension and the engine from the body for a smoother, quieter, and comfortable ride.

The lineartronic CVT comes as standard on the flat-4 2.5-liter EJ25 engine on all markets, while on some markets it comes with the flat-4 2.0-liter EJ20 engine. The 2.5-liter GT makes use of a turbocharger and a 6-speed manual transmission (flat-4 = boxer, and since from the beginning of the article you used boxer then it’s better to continue using boxer instead of using them interchangeably)

The Subaru Legacy 6th generation features fog lights and alloy rims as standard across all grades. The 3.6R and the sports grades come with 18-Inch Alloy rims and dual exhaust.

The Legacy kept using boxer engines with the standard all-wheel drive, but in this generation, there is no manual transmission option, only automatic and lineartronic CVT.

Although the dimensions may not show it, the Legacy’s cabin feels way bigger than the previous generation model, particularly in the back. While its shape and design are still on the dowdy side, the Legacy’s interior is practical and functional, with well-chosen materials throughout. The high-end Limited and Touring models come with leather upholstery, but cloth upholstery is standard. The seats are comfortable and well-sculpted, and on the higher trims, they feature a manual thigh extension for the driver’s seat—a boon to long-legged drivers.

The Subaru Legacy is a midsize sedan that entered its 7th generation in 2020 with a full style and redesign. The Legacy is closely related to the Outback crossover SUV and sits above the compact Impreza in Subaru’s lineup. Like most Subarus, all Legacys come standard with an extensive list of standard driver aids, safety features, and all-wheel drive. Most competitors don’t even offer AWD, which gives the Legacy a leg up with drivers in snowy or wet climates. The Legacy remains largely unchanged for 2021, with just a few more standard features than the previous model.

The price of used Subaru Legacy in the market varies from version, trim, and dealers while prices here are reflective of average BE FORWARD prices as of July 2021 starting from USD 2,400.

The Subaru Legacy is one of the most outstanding station wagons we’ve seen in the market. There are few rivals that can match its capabilities both off-road and on-road. Of course, the small ground clearance is a subject that has to be addressed but overall, it’s a pretty solid car.

ALL SUBARU LEGACY FOR SALE