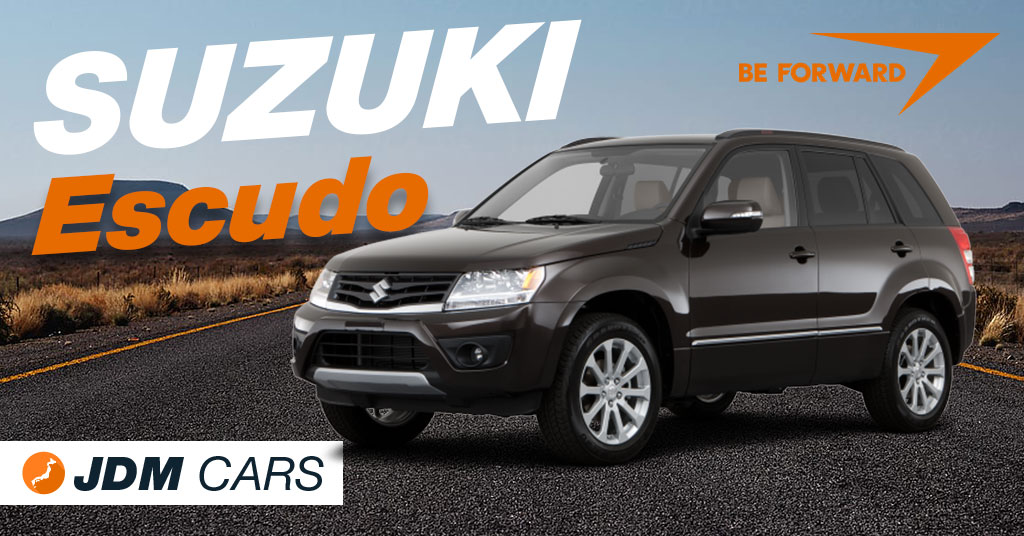 Suzuki Escudo (also known as Suzuki Vitara, Suzuki Sidekick, Suzuki Geo tracker in other markets) is a car produced by the Japanese automotive company Suzuki. The Escudo was first introduced in 1988 and is currently in its fourth generation.

From 1988 to 1990 the Escudo was only available as a 3-door hardtop/convertible. In 1991 Suzuki released the 5-door model which was a much better vehicle as it offers more space, more room for passengers, more room for cargo, and coil spring suspension making the ride more comfortable.
The latest Escudo is the 4th generation which was released in 2015 and has received several upgrades to date.

In 1991 Suzuki introduced a 5 door Escudo with a spacious interior, a much bigger boot (263-1920 L) and enlarged petrol tank (55L) a sturdy frame, part-time 4WD system, and coil-spring suspension, all these developments made it a comfortable vehicle for long drives with friends or family as it assured the owner of solid performance and gentle ride on-road and off-road.
The Escudo kept evolving and we are currently on the 4th generation with the latest being the 2021 model.
The 4th generation Escudos interior features a simple and easy-to-read instrument cluster and a 7-inch touchscreen. The standard Escudo comes with USB/Bluetooth for media streaming, a four-speaker audio system with AM/FM radio, DAB digital radio, and a CD player, as well as steering wheel controls.

The high-end models feature a touchscreen sat-nav system, smartphone mirroring, and a slightly better sound due to the addition of tweeters.

The driver seat is comfortable; it features a wide range of seat and steering wheel adjustments. The Escudo offers large door pockets, but the glove box is a bit small.
The Escudo offers lots of headroom and legroom for the front and rear passengers, although taller people might not be that comfortable.

The Escudo comes with a 375-liters boot that extends to 710-liters with the rear seats folded flat. The rear tailgate opens wide enough to simplify the loading and unloading of goods.

The earliest 1st generation (1988-1990) Escudos were available as mini SUVs that came in two options, a 3-door hardtop or a 3-door convertible (this was sold in the American Market as the Suzuki sidekick). In 1991 Suzuki launched a 5-door hardtop model.
In 1998 Suzuki introduced the second generation Escudo with a more curvy body compared to its predecessor.

In 2001 a long body model of the second generation was introduced and given the acronym XL7 (The Grand Vitara XL 7). The increase in body size made the car more spacious but also enabled the possibility of having a third row that made the car a seven-seater, although some were five-seaters.

In 2005 Suzuki introduced a 3rd generation of the Escudo family with a completely revamped look with an increase in size and sporting a sporty look.

In 2018 (the 30th anniversary of the Escudo) Suzuki released the 4th generation of the Escudo. This model came with five slotted grilles with some chrome finishing.

The 2020 Escudo is a solid-looking SUV, with a two-bar grille that links the headlights, while the LED daytime running lights sit on the edges of the bumper just beside the fog lights to underline the car’s width. Other exterior design features include fake vents on the edges of the hood and the muscular lines that run back towards the doors to the rear wheel curve adding a dash of sportiness.

The 1st and 2nd generation Escudos were not that safe judged by today’s standards, but they were safe by the standards of yesteryears. Standard safety features then included seatbelts for the 1st generation, and airbags and ABS on the second generation. On the 3rd generation, standard safety features include side curtain airbags, rear and front head airbags, ABS, electronic stability, and traction control.
Standard safety features on the 4th generation Escudos include seven airbags, ABS, rearview camera, seatbelt pretensioners, and force limiters that limit the rearward movement of the brake pedal. Other features include a Dual Sensor Brake Support (DSBS), a braking technology that makes use of Laser radar and monocular sensors to enable preemptive collision detection and the Traffic Sign Recognition feature that makes use of a front-facing camera that scans the road ahead to detect any changes in traffic using a character recognition software that notes any changes described by traffic signs, and the Total Effective Control Technology (TECT) which improves impact absorption.

The Escudo/Vitara needs no introduction due to its reputation over the years. It’s a car that is built to take you to places and serve you as an honest servant over a long time. Suzukis are built to be efficient and practical, and so is the Escudo which lives by that slogan. If you are out there looking for an honest servant, then look no further, go get yourself a Suzuki Escudo at BE FORWARD where you’ll find a very long list to choose from.