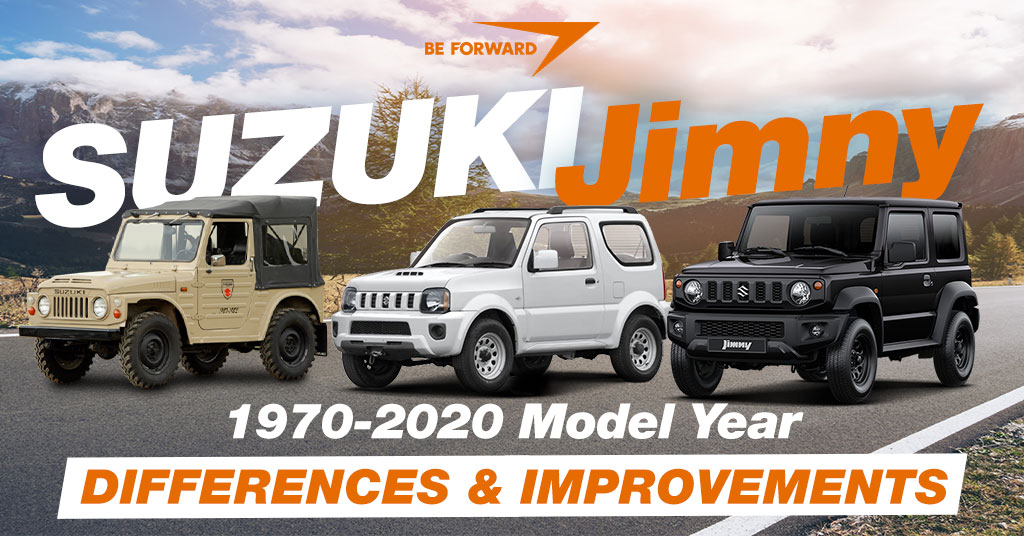 The Suzuki Jimny is a 4×4 mini SUV produced and marketed by the Japanese automobile company Suzuki from 1970 to the present (2021) and is currently in its fourth generation.

In the era of World War II, off-roading cars such as the Jeep CJ and the Toyota BJ were very common as they served as multipurpose vehicles. In the post-war period, these cars were transformed for civilian use. On this transformation, Suzuki saw an opportunity and began working on a project for a small 4×4 that qualifies as a Kei car.

As part of the project, Suzuki bought the small Haflinger 4×4 from the Austrian company Steyr-Puch in order to study the car with the intention of building an off-road Kei class vehicle. While working on this project, an opportunity arose in 1968, when a car company known as Hopestar went bankrupt and Suzuki bought it. Before it went bankrupt, Hopestar had produced a line of lightweight offroad vehicles dubbed the Hopestar ON360. The already available technology at Hopestar sped up Suzuki’s small 4×4 project which eventually resulted in the birth of the Suzuki Jimny in 1970.

In 1970 Suzuki introduced the Suzuki Jimny LJ10 (Light Jeep 10) as a more compact, off-road capable, and nimble alternative to the other already existing 4×4 vehicles at the time.

The Jimny became the first and only mass-produced 4×4 car that qualified to be categorized as a “Kei” car in Japan. For the Jimny to qualify to be a Kei car, it had to comply with the specified exterior dimensions of Kei cars by the Japanese Transportation Guideline. One of the conditions for a car to qualify to be a Kei car then was being less than 3 meters long, so Suzuki had to make sure this condition is met by making sure the engine size, car width, and length were within the specified range. Suzuki also had to sacrifice the fourth sit in place for a spare tire behind the front passenger seat.

The three-seater LJ10 was built on a body-on-frame with lightweight body panels that were covered by a soft-top roof, zipped canvas doors, and leaf springs that are able to cope with big loads and allow the car to traverse hills with ease.

The LJ10 came fitted with a 2-stroke 2-cylinder air-cooled 359cc engine with 25 hp used on its Hopestar predecessor. The engine was later upgraded to 27 hp. These engines were mated with a four-speed manual transmission.

In May 1972 the LJ received some upgrades and was renamed the LJ20. Some of the changes included flipping the grille bars from horizontal to vertical, which later became the Jimny signature grille. The air-cooled engine was replaced with a water-cooled unit.

Hardtop and left-hand models were also introduced during this release with a focus on exports.

In 1975 the Jimny was upgraded again with the introduction of the LJ50/SJ10 with a focus on the export markets. Some of the changes included the relocation of the spare tire to a hanger on the rear door which gave access to two rear passenger seats facing each other. This was possible due to changes in the Kei car specification.

The LJ50 was fitted with a two-stroke 550cc three-cylinder water-cooled engine with 33 hp.

In 1977 Suzuki released the LJ80/SJ20 Jimny as the last of the first generation LJ series.

Exterior changes included larger front and rear flared wheel arches that made the car more stylish. The hood was slightly raised to accommodate the new slightly larger engine. There was also an option of a pickup truck model known as the LJ81.

The interior also received some improvement, with new seats and a new steering wheel.

This LJ80 came fitted with a four-cylinder, water-cooled 800cc engine with 42 hp.

In 1981 Suzuki introduced the second generation of the Suzuki Jimny, the Jimny SJ30. In Japan, it was still sold as a Kei car, while in other markets it was sold with a much wider and longer body with a slightly larger engine. The SJ410/413 had different names in different markets such as Samurai, Sierra, Maruti Gypsy, Holden Drover, Caribbean, and more.

The SJ Series was a newly designed 4×4 vehicle with a new statement and fashion. The SJ Series remained true to its utility heritage by featuring rear leaf-spring suspensions combined with softened gas dampers with improved approach and departure angles.

Under the hood, Jimny’s destined for the Japanese local market were still powered by the 550cc LJ50 engine used by its predecessor while those destined for export were powered by a 1000cc (F10A) four-cylinder engine with 44 hp. These engines were mated to a four-speed manual transmission.

The SJ410 was available in several body styles which include a long-wheelbase pickup, half-door convertible, raised-roof hardtop, no-glass hardtop, and two-door hardtop.

The combination of body-on-frame, small dimensions, and a bigger engine made the SJ410 a true off-roading car.

In 1984 Suzuki launched the Jimny SJ413 which was an upgraded SJ model fitted with a lightweight 1.3-liter four-cylinder engine with 64 hp. This engine was mated with a five-speed manual transmission.

In 1997 at the Tokyo Auto Show, Suzuki unveiled its brand-new Jimny JB23, with a substantial design change. The Jimny JB23 was more modern than its predecessors, with a slogan “smart in the city, tough in nature”.

The JB23 Jimny was boxy like the previous models, but with a different design and style that made it look nice and balanced. It was available in a closed or open-roof (convertible) body. At the rear, the JB23 featured a side-hinged tailgate with a spare tire on it.

Suzuki tried to provide a cabin with as much comfort as possible by installing coil spring suspensions with separate shock absorbers in place of the previous model’s leaf springs at the front and leaf springs with dampers at the rear. The Jimny JB series came fitted with two front bucket seats, a bench for two at the rear, and a washable plastic dashboard. Due to its size, the rear seats are better suited for toddlers. As for luggage space, there isn’t much room left with the rear seats occupied.

Suzuki released the fourth-generation Jimny in 2018, almost 50 years since the release of the first model. The new Jimny stayed true to the retro designs of the original (LJ and SJ) models in the series but featured several modern technological upgrades such as the 7-inch touchscreen infotainment system, automatic cruise control, and other technologies that made the Jimny more practical, functional, and beautiful.

The exterior of the Jimny is boxy and simple with its front face consisting of a clamshell bonnet, a straight-up windshield, round headlamps, and the traditional Jimny grille in black.

The cabin design of the Jimny is simple and authentic and a bit modern compared with previous models. The Jimny is a four-passenger car, with firm, supportive, and comfortable seats that offer enough legroom for front-seat occupants. Like the previous Jimny’s this model is also short of rear legroom due to its size, but it’s a bit better compared to the previous models. Cargo space is also limited but can be extended by folding flat the rear seats, creating a 377-liter cargo area with utility screw holes and luggage anchors.

The Suzuki Jimny has been around for more than 50 years. It kept on evolving by getting better and better becoming even more practical, beautiful, and functional. But even after all these years, the Jimny has managed to stay true to its core characteristics, and maintain its 4×4 abilities. The Jimny has an almost cult following in certain circles due to its reliability, ruggedness, and ability.

Are you considering buying one of these legendary 4×4’s? Then you are at the right place! At BE FORWARD, we have a list of 1300+ Jimnys for sale.