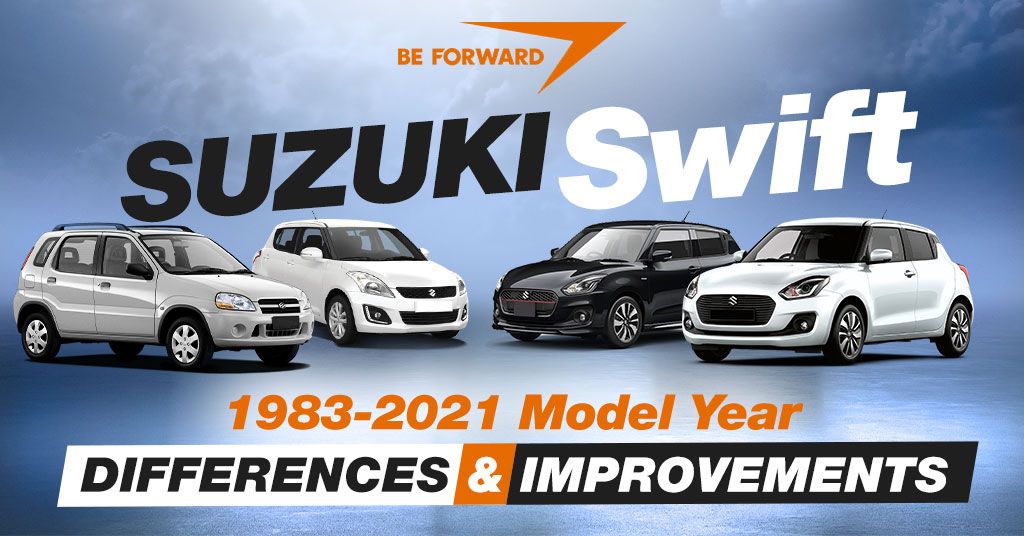 The Suzuki Swift has won numerous awards including the 2006 Annual RJC Car of the Year and, perhaps more interestingly, The Most Fun Car to Drive in Japan. This comes as no surprise since the Swift features exceptional handling and performance. Of course, it also achieves excellent fuel economy and has a low cost of ownership. The Swift is a super-mini for those who love to drive.

So, just how much has the Suzuki Swift changed over the years? Let’s take a look between 2004 and 2021 to see how this dependable vehicle has improved.

The Suzuki Swift started production in 1983 as a manufacturing and marketing rebadged of the subcompact Suzuki Cultus marketed globally across 3 generations and 4 body configurations 3-doors hatchback, 4 doors sedan, 2-doors convertible, and 5–doors hatchback and fitted the Suzuki G engine family.

Some models received exterior styling upgrades including side skirts, the bumper bar attached with fog lights, and specifically molded spoiler.

The 2004 Suzuki Swift comes in a compact, sporty and elegant design. It sports an inline-four engine in either a 1.3L displacement that delivers 91 horsepower, or a 1.5L displacement that offers 110 horsepower. You can choose between 5-speed manual or 4-speed automatic transmission, as well as front-wheel drive or a 4WD drivetrain. The 2004 Suzuki Swift can deliver fuel economy ranging between an impressive 15km/L and 18.8km/L.

The ’04 Swift is great when it comes to safety and security, as it comes with dual airbags, 4-wheel anti-lock brakes with an electronically-controlled braking force distribution system.

In terms of features, the 2004 Swift comes with front bucket seats, cloth interior, along with standard features like air conditioning, AM/FM stereo with CD player and 4 speakers. This is definitely a solid option, but it only gets better.

When it comes to the 2005 Suzuki Swift’s features, you can expect a great equipment package that includes a radio system with CD and DVD playback, along with power steering, windows and central locking. Safety features include anti-lock brakes and airbags. Some models on sale at BE FORWARD may include a spare tire and jack.

The 2006 Suzuki Swift really established the model’s presence as a car to take notice of, thanks to winning the 2006 Annual RJC Car of the Year Award, as well as the 2005-2006 Japan Car of the Year Special Award for Most Fun. It also offers the three engine displacements previously available, with some special grades including leather-wrapped steering wheel and 15-inch aluminum wheels. The 2006 Suzuki Swift can deliver fuel economy ranging between an impressive 15km/L and 18.8km/L.

Key features of the ’06 Suzuki Swift may include keyless entry, fog lights, alloy wheels, and a rear spoiler. For the inside, you can expect power windows, central locking, as well as power mirrors to go with the air conditioning and radio/CD system. Some of our available stock comes with wheel spanner and jack.

The 2007 Suzuki Swift comes in with an improvement to its already impressive fuel economy, along with new engine displacements and enhanced transmission. Engine choices range between 1.2L (90 horsepower) 1.3L (91 horsepower) and 1.5L (110 horsepower). Able to seat up to 5 passengers, the ’07 Swift is offered in a 4-speed automatic or 5-speed manual transmission with a front-wheel or 4-wheel drivetrain.

Some 2007 Suzuki Swift models come with great comfort and convenience features that may include steering wheel-mounted controls, CD player and radio system, along with power windows and power mirrors. Safety features include ABS and airbags, with a spare tire and jack also being available with some stock models.

The 2008 Suzuki Swift goes full speed ahead, continuing the compact vehicle’s legacy of power, performance, comfort and convenience. The ’08 Suzuki Swift has 3 engine displacement options, all of which are inline-four DOHC engines. Choose between 1.2L, 1.3L and 1.5L, with an output of 90, 91 and 110 horsepower, respectively. Fuel consumption rates of the 2008 Swift range from 16km/L to 20.5km/L. Available drivetrain options are full-time 4WD.

If you need a compact hatchback full of features, the 2008 Suzuki Swift is that car. Some key features may include a radio system with CD-playback, power windows, central locking, air conditioning and power steering. Safety features can include anti-lock brakes and dual front airbags. These features depend on the variation or grade of the Swift that you choose.

The 2009 Suzuki Swift somehow pushes even further forward, especially when it comes to fuel efficiency. Enhancements to the CVT transmission contribute to this efficiency, which ranges between 13.6km/L and 21km/L. Attractive grade packages include changes to the seat skins, as well as larger aluminum wheel sizes. Choose between a 4-speed or 5-speed transmission.

There are plenty of great features that you can expect from the 2009 Swift, which may include power windows, central locking and electronically adjustable mirrors. Other great features, depending on the trim you choose, can also include a central display, keyless entry and air conditioning.

Finally, the 2010-2016 Suzuki Swift increases the vehicle’s fuel efficiency even further and employs a new platform that reduces the vehicle’s weight. It also incorporates a new 1.2L inline-four engine, leading to an astounding fuel consumption rate that reaches between 20km/L and 23km/L, so you can look forward to saving money with fewer trips to the fuel pump.

In terms of features, some 2010 Swift models come with a high-quality sound system with radio and CD playback, and even USB connectivity. Other great features include air conditioning, push-start ignition, keyless entry, along with powered equipment like windows, locks, and steering.

2017-to the present Suzuki Swift

The 2017 Suzuki Swift is the first Swift to use the Smart Hybrid Vehicle by Suzuki (SHVS) mild hybrid technologies and the newly developed Boosterjet direct-injection turbocharged petrol engines. The hybrid model equipped with a lightweight 12-volt hybrid system features a belt-driven Integrated Starter Generator (ISG), which helps recoup energy via regenerative braking and enables the engine during acceleration.

The 2017 Suzuki Swift is equipped with several safety kits such as; laser sensors and the forward-facing camera that deliver high-beam assist and lane departure warning, along with autonomous emergency braking. The 2017 Suzuki Swift’s fuel consumption is range from 16Km/L to 27.9 Km/L depending on the engine fitted under the bonnet.

In 2017 Suzuki Swift Sport was officially introduced at Frankfurt Motor Show. The vehicle comes fitted with a 1.4L K14C turbocharged Boosterjet engine shared with the Vitara S. The Swift Sport makes 138 bhp (140 PS; 103 kW) DIN at 5,500 rpm and 230 Nm of torque at 2,500–3,000 rpm. It comes mated with either a 6-speed automatic transmission or a 6-speed manual. The Suzuki Swift Sport has totally new rear and front bumpers, 16 or 17-inch alloy wheels, a rear spoiler, wider tires, a front chin spoiler, red accents interior, and dual exhaust.

Suzuki launched Suzuki Swift Sport in June 2020 with Suzuki’s SHVS 48-volt mild-hybrid technology for the European market. The Swift Sport is still fitted with the K14D Boosterjet 1.4L turbocharged engine revised with a smaller turbocharger and dual VVT. The Swift sport makes 127 bhp (95 kW; 129 PS) at 5,500 rpm and 235 Nm of torque at 2,000–3,000 rpm.

Apart from being fitted with different engine sizes, the Suzuki Swift feels a bit faster when driving and offers great fuel economy also the Swift comes equipped with some attractive features both inside and out. Which model is your choice? Visit BE FORWARD.