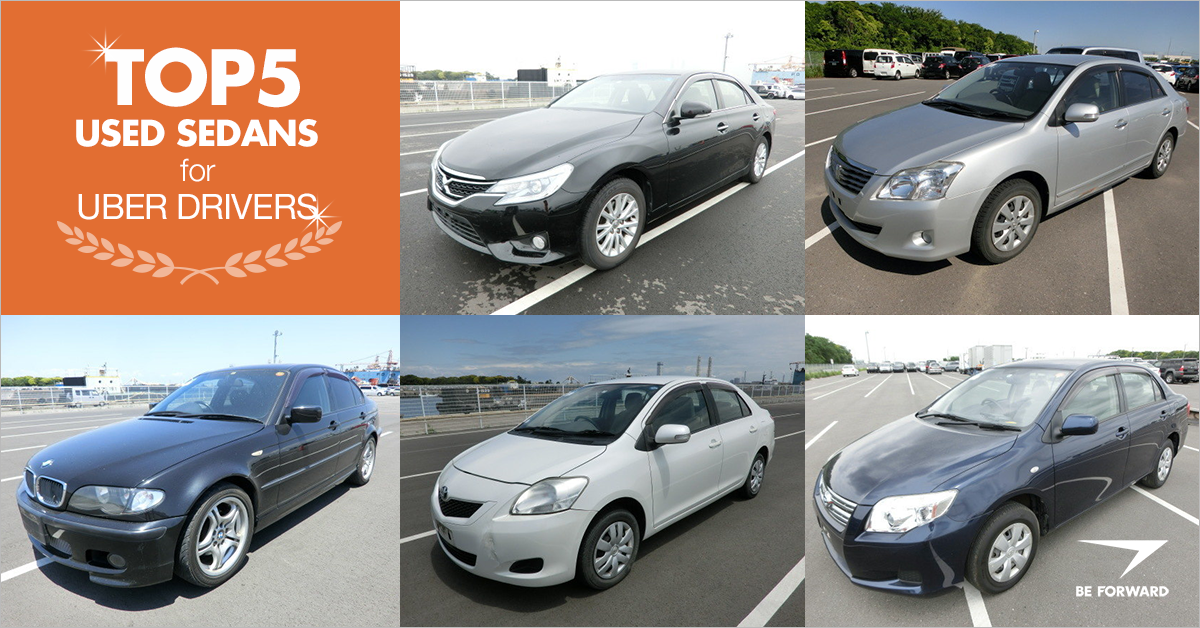 Uber drivers need to take many things into consideration for their business, but the chief one is to get their customers where they are going on time and to make sure there are no breakdowns between destinations.

Sedans are popular for transporting smaller groups of people, and as such running a profitable Uber taxi business requires that one have a reliable sedan that is also fuel efficient. Here are 5 of our top used sedans perfect for Uber drivers.

In production since 2001, the Toyota Premio is one of the best compact sedans from Japan and it has been bought in large numbers as a used car. Today, with Uber making a lot of inroad in African, Asian and other urban centers, this car has become the business vehicle of choice for many people. It comes with superior exterior and interior features and following its namesake it stands out as an above-average sedan.

Toyota Premio comes in three engine sizes. The most common one and the best for an Uber business is the 1.5-liter engine one. Following this, there is the 1.8-liter and the 2.0-liter, both of which come in 4WD.

These models use petrol, as Toyota never produced a diesel engine for the Premio. The fuel economy of the Premio is roughly 15 liters per 100 km, an average fuel tank capacity of 60 liters.

In the interior of the car, the most eye-catching feature is the wood trim, which gives the car a luxurious and classic look. Power windows and mirrors as well as a power steering wheel that is tiltable and telescopic are some other features to expect. Airbags for driver and passenger, a spacious 5-seater capacity and manually adjustable driver seat are also welcome additions.

There is a lot of room for storage in the cabin, from cup holders to a place to keep your cellphone as well as the glove compartment and the door pockets. A large boot space is also available, suitable for stashing customers groceries, briefcase, or other luggage that they may be carrying with them.

On the exterior of the Premio, you will find a sleek and refined design in addition to steel rims that may or may not have plastic covers. Its wheel size is around 15 inches, good enough to clear most speed bumps with ease.

Hot on the heels of the Premio comes its sister the Corolla Axio. This 1.5/1.8-liter car is particularly perfect for Uber taxi businesses, thanks to its low consumption and easily available spare parts. Introduced to the market in 2007, this family car has been a dream come true for small families looking for an affordable and reliable used car that is so easy to maintain, and it is one of the most common for Uber taxi drivers.

Under the bonnet you may find the 1.5-liter or 1.8-liter, 1NZ-FE engine, depending on the model. However, the 1.5-liter engine in particular has an incredible fuel economy and can reach an impressive 18 liters per 100 km.

The average fuel tank capacity of the Corolla Axio is 50 liters, which is also good for an Uber taxi business. The INZ-FE engine is one of the best Japanese engines available, and with good maintenance this engine will run for tens of thousands of kilometers without any trouble at all.

While the interior of this 4-door, 5-seater car is not as spacious as that of the bigger Premio sedan, it still holds its own. It can seat 5 grown passengers in good comfort and plenty of leg space.

Premium safety belts, a built-in easy to use radio, air conditioning, and other standard features you may find with other sedans of this range are available.

The exterior of this car is similar in many ways to the Toyota Premio, thanks to its equally sophisticated design. For some models, you may also get spoilers and fog lights that furthermore add to its appeal.

In addition, the Corolla Axio features good ground clearance and owing to its popularity spare parts are easy to find.

On BE FORWARD, the average price for a used Toyota Corolla Axio usually ranges from around $2,000 to $8,000.

Though slightly less common for Uber drivers in developing countries, the BMW 3 Series is perfect for those who often pick up high-end clients who are ready to pay for a more luxurious ride and offers a lot of features and added comfort.

On average, different generations and models of the BMW 3 Series come in a number of trims and engine sizes. However, for an Uber business, the 230-horsepower engine is often recommended.

Due to the added athleticism of this car, you can drive it at higher speeds more safely than many other similarly sized sedans. With a 60-liter fuel tank and a fuel consumption around an impressive 20.69 km per liter, this car works well for going the distance.

This is a 5-seater, 4-door compact luxury sedan, and depending on the option that you pick, this car could come in a six-speed manual transmission with overdrive or 8-gear automatic transmission.

Some of the interior and safety features include 8 airbags, heated seats, adjustable steering column, leather steering wheel, leather seats. and other touches of luxury. The seats are memory enabled and the driver seat is height-adjustable.

On the exterior of the BMW 3 Series you will be treated to a lot of signature eye-candy as only BMW is capable of, with sleek lines meeting dashes of European flavour.

Its stylish yet solid build and design meets a number of added features including strong fog lights, 225/50R17 for the wheel size, and a huge boot that is all of 480 liters in volume.

If you are after a used compact sedan for your Uber business that is smaller than the Toyota Corolla Axio, then the Toyota Belta, also known as the Toyota Yaris Sedan, is a great choice to consider. Mostly available in 1.0-liter, 1.3-liter or 1.5-liter 1KR-FE engine variations, this is a great choice for Uber drivers looking to transport one or two passengers at a time.

The engine is mostly VVT-I 3- or 4-cylinder with a multipoint fuel injection system and it has a tank capacity of 42 liters. The fuel type is petrol, and for fuel economy this depends on the model that you buy.

The interior of the Belta is very much like that of its predecessor the Toyota Platz, however with a number of improvements. For example, there is more space for both driver and passengers and the trunk volume is also bigger. For safety, you can expect front driver and passenger airbags, safety belts with pretensioners, and a very responsive steering system.

The car is mostly available with 4-speed automatic transmission and a 2WD drive train. However, if you would like a 5-speed manual transmission Toyota Belta, that option is also available on certain models.

The exterior of the Belta is simple and offers a rounded aesthetic that focuses more on functionality and minimalism than pure looks.  For a vehicle of its size its ground clearance is also good, thanks to the 15-inch wheel size, and it offers bright headlights in addition to open windows with high visibility for the driver.

The Toyota Mark X is a superior and luxurious Japanese sedan. Made for luxury this 4-door, 5-seater sedan comes with a bigger engine, a lot of space, and many more features than other cars of its size in the market that will make you the envy of other Uber drivers.

The Mark X is sold with the 2.5-liter 4GR V6 engine, but there is a second variant with 3.5-liter 2GR V6 engine. Combined with a 6-speed automatic transmission and rear wheel drive, the 8.4 second time it takes to accelerate from 0 to 100km makes this an incredibly fast luxury sedan.

It also offers a fuel economy of around 12.9 km per liter and a fuel tank capacity of 71 liters, making it a favourite of Uber drivers looking to go the distance.

The interior looks good, with added features including comfortable seats with intelligent headrests, 7 airbags, frontal SRS airbags, and many more. The rear seating also boasts a larger amount of space in comparison to regular sedans like the Toyota Premio.

There is a lot of sitting space and cabin storage, from compartments that can fit a whole handbag, small storage space for a mobile phone and other smaller items as well as the door pockets. 4 cup holders, and an extra storage shelf just below the dashboard are some of the storage features that both the driver and passengers can enjoy.

From its exterior the Mark X offers a strong design, with a slanted rear and an aggressive front that give the impression of a heavy performance car that is ready and roaring to go.

Topped off with a distinctive grill and alloy wheels on select models, there is also a lot of trunk space which is further extendable for when carrying passenger’s larger items is needed by folding the rear seat.

Looking for even more used sedans that could be the perfect Uber vehicle for you and your business? Click or tap the button below to view BE FORWARD’s wide selection of available sedans.