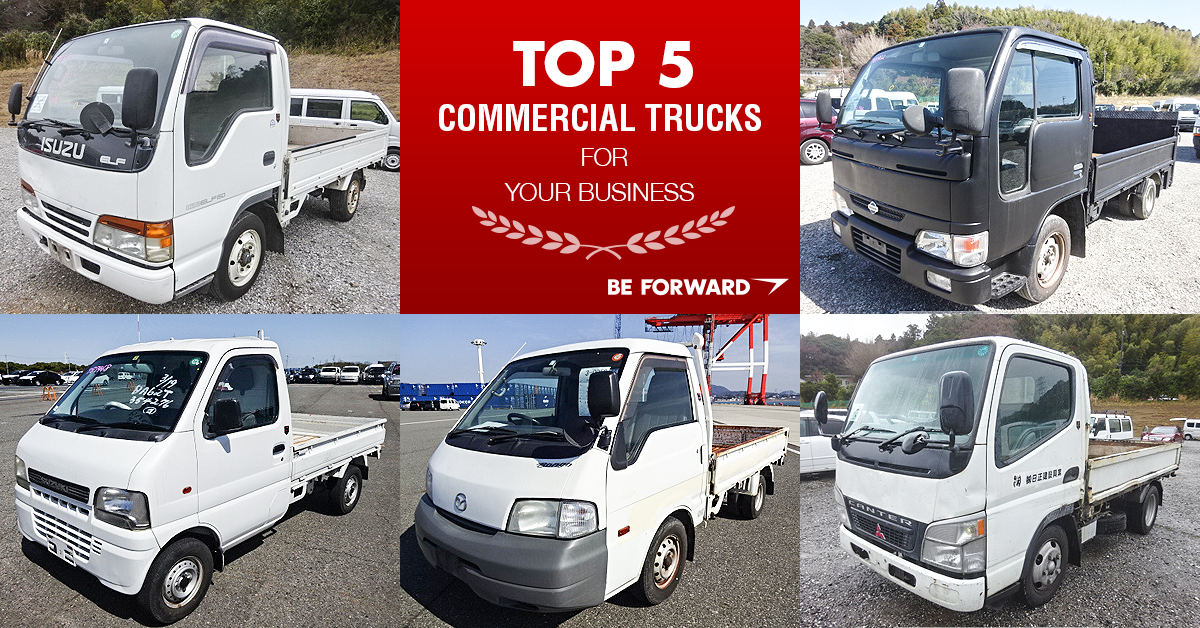 For the men and women tasked with buying a dependable truck that their workers can use every day, much more thought has to go into every commercial truck they consider. People like you have to consider a truck’s cargo capacity, towing capacity, cab size, engine size, fuel type, a truck’s reputation for durability, and whether the truck is an economic purchase.

There are dozens of commercial truck nameplates screaming for the attention of every purchasing agent. At BE FORWARD, we have nearly 1,000 in stock. Even with 1,000 units in our inventory, there are several that we feel are versatile enough to meet the needs of a wide array of buyers. Let’s have a look at 5 commercial used trucks that may well meet your needs. 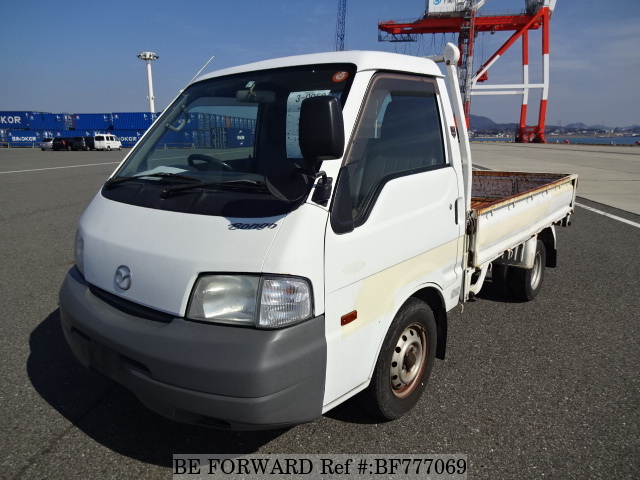 Mazda introduced the Bongo line in 1966. It has been sold as a rear, mid, and front engine van and truck for more than 50 years over four generations. The Bongo Truck is a light-duty commercial truck that is available with a tilt bed or as a panel truck, so can meet many of your construction and delivery needs. 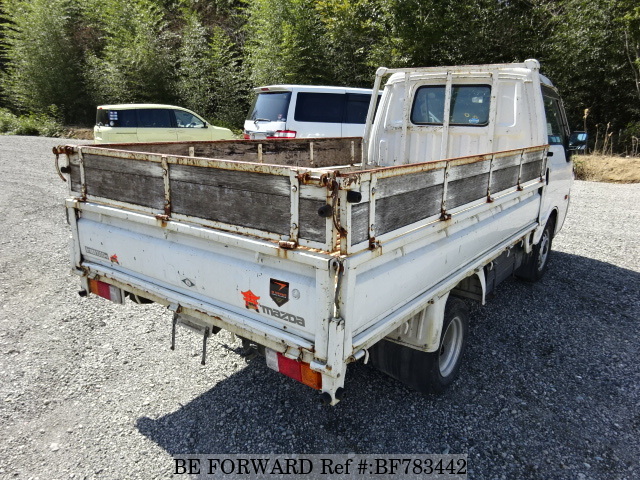 Above: Rear of a used 2006 Mazda Bongo Truck

The vast majority of the Mazda Bongo Truck units that are available on the used market are from the fourth generation that went into production in 1999 and continues today. This generation has two engine choices. The first is a 1,798 cc petrol I4 that is capable of 125 bhp and 165 N-m of torque. The second is a 2,198 cc turbodiesel powerplant capable of 110 bhp and 260 N-m of torque. The base gearbox is a five-speed manual, but a four-speed automatic is available. The Bongo Truck can be found in 2WD and 4WD. 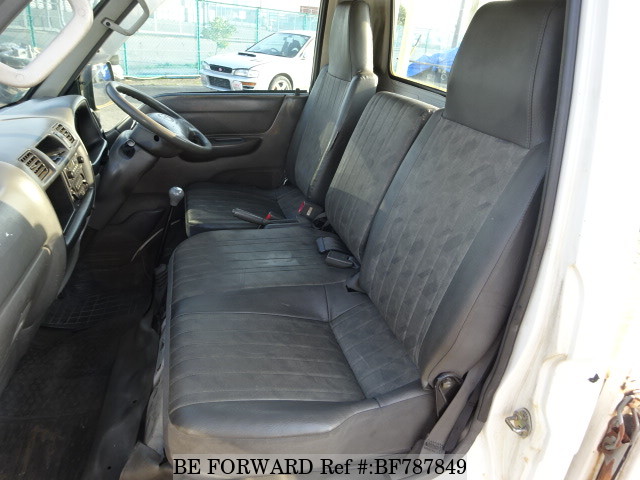 Above: Interior of a used 2000 Mazda Bongo Truck

Depending on the trim level of the truck you buy, a Mazda Bongo Truck has a cargo capacity between 750 and 1,000 kg. Creature comforts are limited as this is a purpose-built truck. In most cases, you will find ice-cold air-conditioning, well-built seats, and a stereo system. 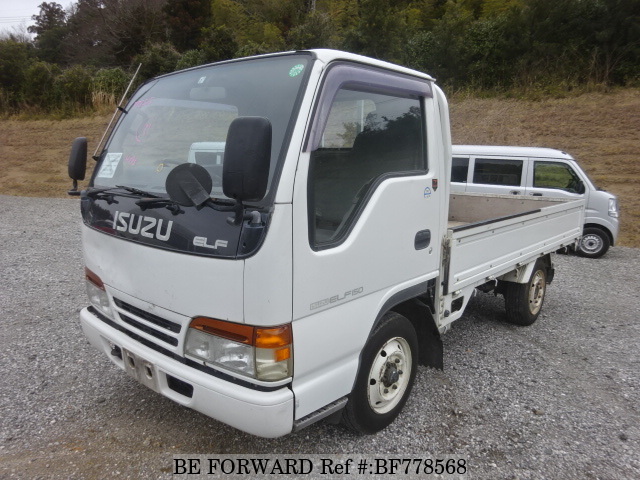 The Isuzu Elf Truck, also known as the Isuzu N-series and Isuzu Bison, debuted in 1959. The Elf is a medium-duty truck that offers a variety of body layouts and weight capacities. The Isuzu Elf Truck uses several engines. The engine found is based on the cargo capacity and use of the truck you buy. To start, buyers may find a 2,771 cc diesel capable of 90 bhp and 185 N-m of torque. 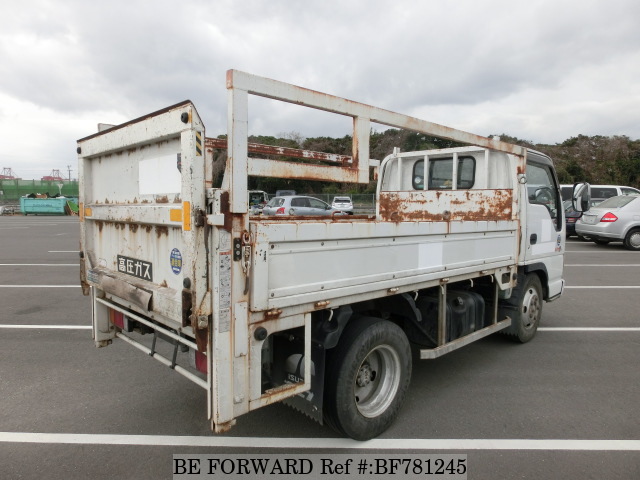 Next up is a turbo version of the same engine that is able to produce 115 bhp and 200 N-m. The top engine in the Elf Truck is a 4,330 cc turbodiesel that is capable of 120 bhp and 285 N-m of torque. Full torque is available at 1,800 rpm. The powerplants can be paired to manual, automatic, and semi-automatic gearboxes. 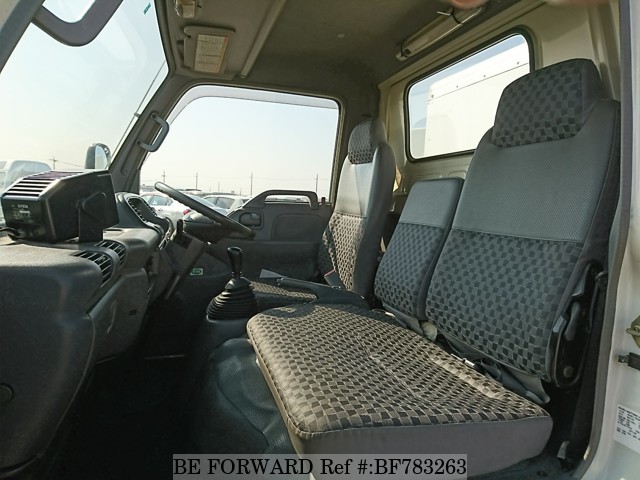 As with the Mazda Bongo Truck, the interior and options of the Isuzu Elf Truck are limited due to this being a work truck. You will find comfortable seating for up to six passengers (if you choose the double cab body), air-conditioning, and plenty of storage space. 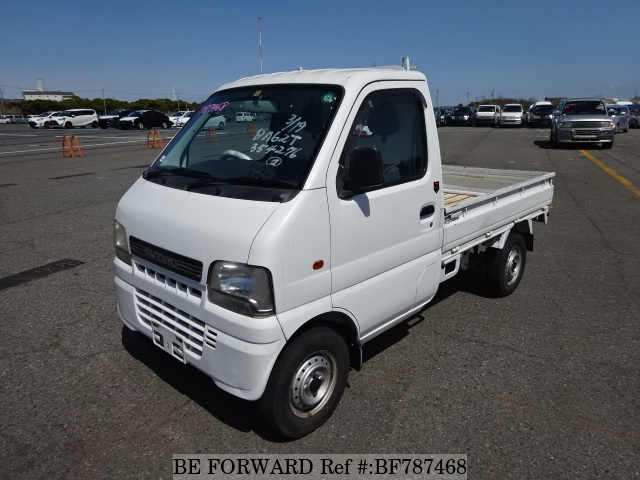 The Suzuki Carry Truck is a kei truck that was introduced in 1961. Over the years, the Carry Truck has built a reputation for its toughness and durability. It is one of the best selling kei trucks in the Japanese home market and has enjoyed a great deal of success in many global markets. 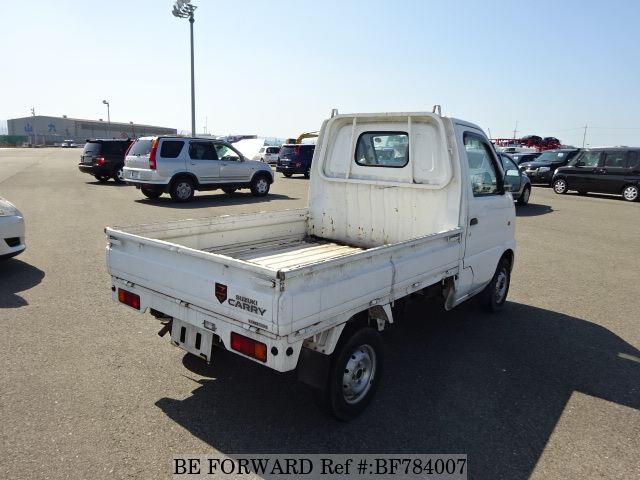 Above: Rear of a used 1999 Suzuki Carry Truck 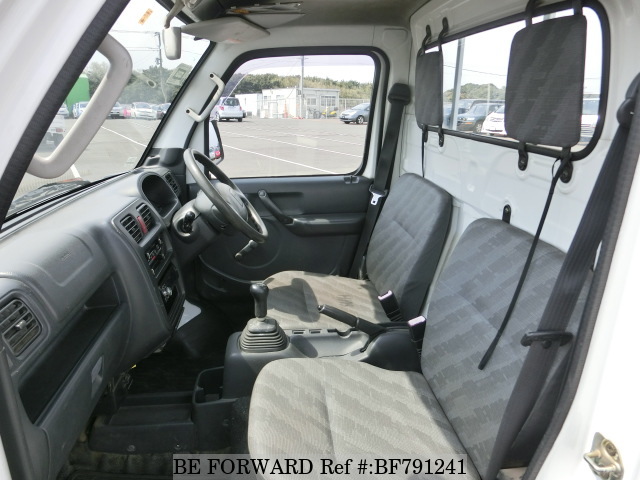 Above: Interior of a used 2004 Suzuki Carry Truck

The standard layout is FWD and the Carry Truck has a cargo capacity of 350 kg. As with all purpose-built work trucks, the amenities in the Suzuki Carry Truck are limited to comfortable seats, storage cubbies, and air-conditioning. It does offer a tilt bed for easy unloading. 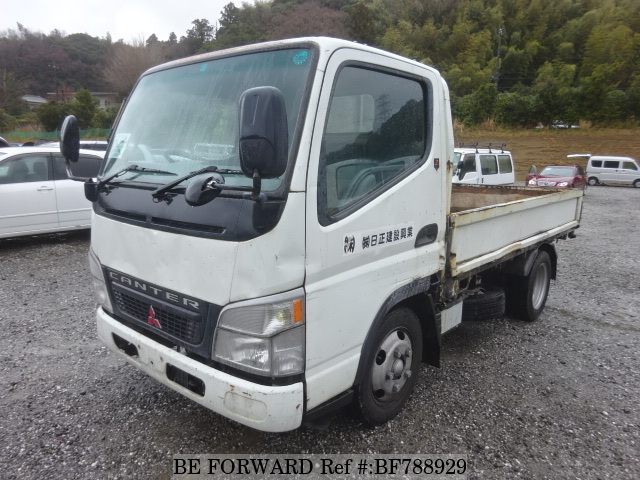 The Mitsubishi Canter, also known as the Mitsubishi Fuso Canter and Fuso Canter, is a line of light-duty trucks build by the Mitsubishi Fuso Truck and Bus Corporation since 1963. The Canter is sold in numerous body layouts in FWD and 4WD, and as a tri-axle truck. Over its 55 model years of production, the Canter has become one of the most heavily relied on commercial trucks around the globe. 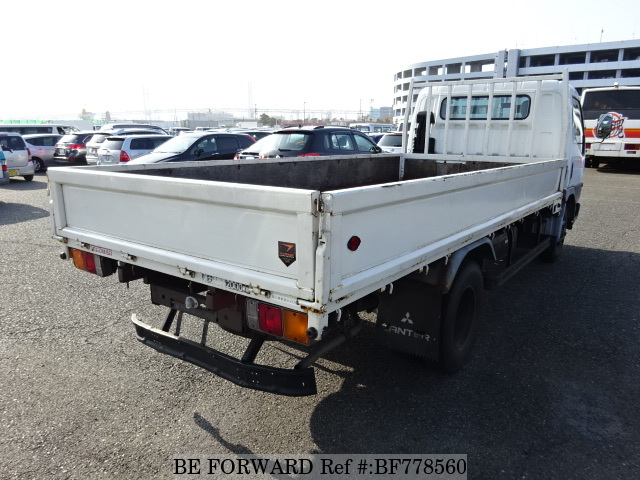 Above: Rear of a used 1997 Mitsubishi Canter 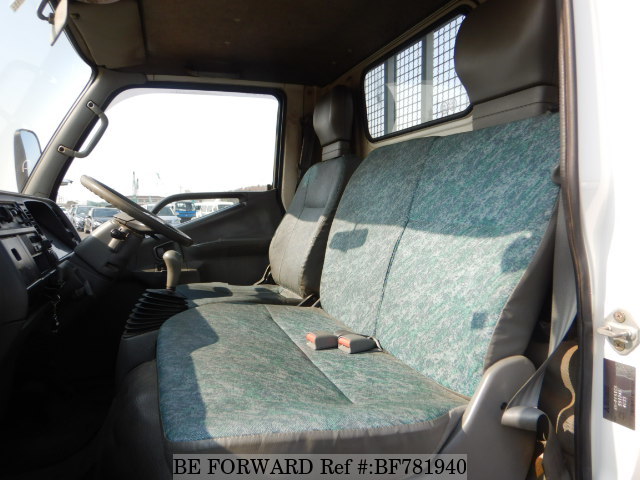 Above: Interior of a used 1999 Mitsubishi Canter

The Mitsubishi Canter Guts is a smaller version of the Canter. The Canter Guts is powered by a 1,988 cc petrol I4 on the low-end, but a more robust 2,968 cc diesel is available as well. The Canter Guts offers seating for three and a more urban-friendly approach to your needs than the larger Canter. 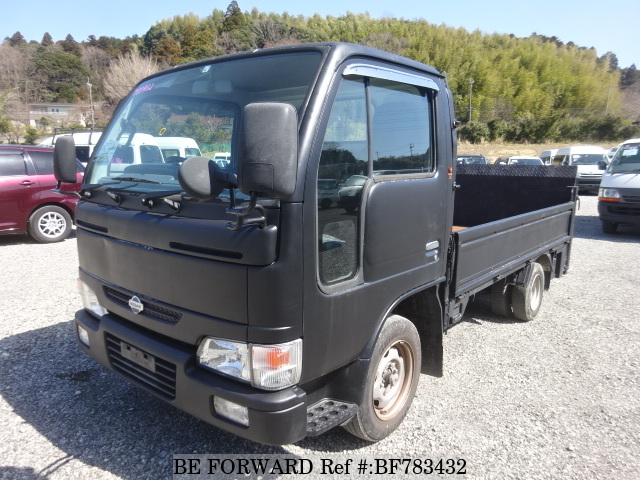 The Nissan Atlas, also known as the Nissan Cabstar, Renault Maxity, Samsung SV110, and the Ashok Leyland Partner, is a series of pick-up trucks and light commercial vehicles that was introduced for the 1982 model year. Depending on the model chosen, a Nissan Atlas has a cargo capacity of up to five metric tons, can be found as a double cab, a box truck, and with a flat bed. 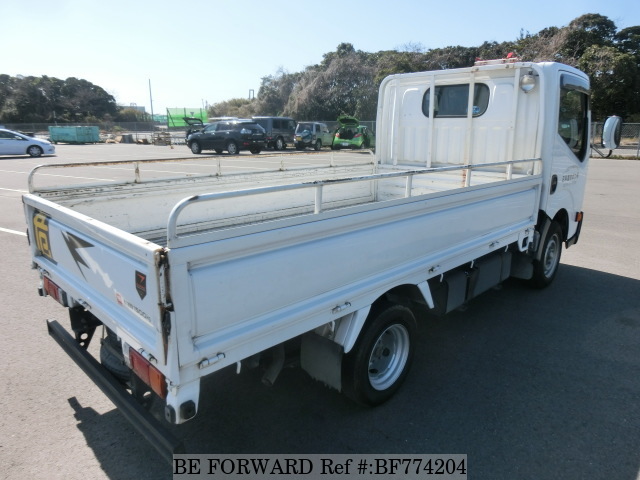 In its lightest form, the Nissan Atlas is a 2WD truck powered by a 1,620 cc petrol I4 paired to a four-speed automatic gearbox. The heaviest trucks are powered by a 4,769 cc turbodiesel capable of 175 bhp and 380 N-m of torque that is paired to a five-speed manual gearbox. With its high power output and huge cargo capacity, the Nissan Atlas may well be the only truck you will ever need to have in your fleet. 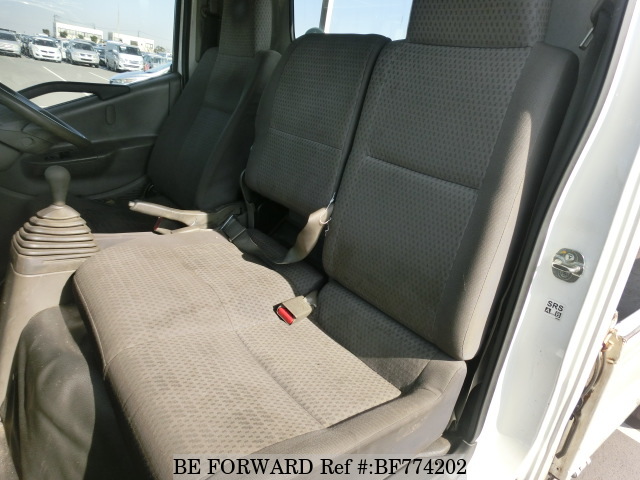 Above: Interior of a used 2008 Nissan Atlas

These are just five of the commercial trucks that BE FORWARD has in stock. If you would like to view our entire inventory, follow this link. If you do not find the truck you want, send us an inquiry and we will look for it.

4 thoughts on “Top 5 Commercial Trucks For Your Business”