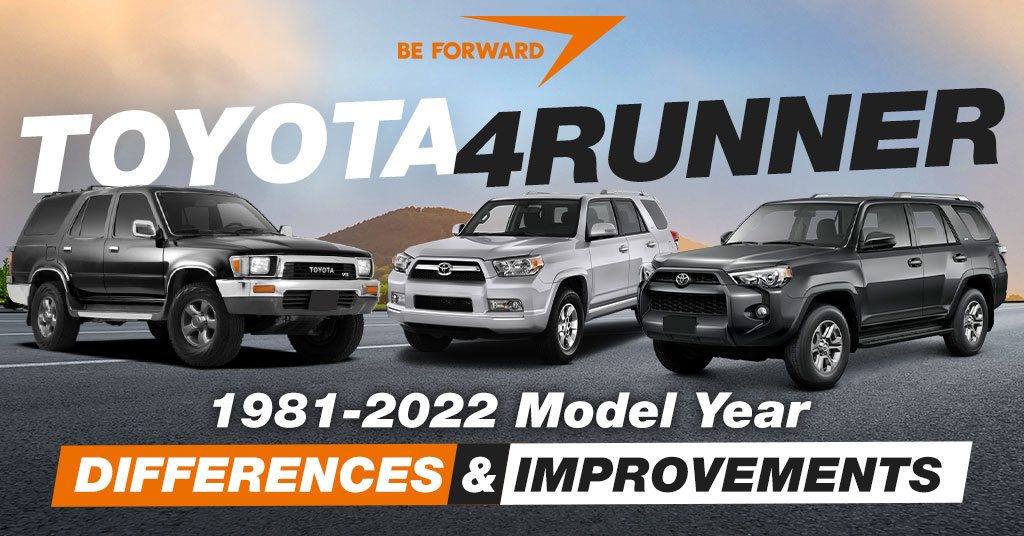 The Toyota 4Runner is a car produced by the Japanese automotive manufacturer Toyota from 1983 to the present. The 4Runner was a revolutionary vehicle that had its mechanicals based on Toyota’s rugged HiLux pickup truck with its bed covered with a fiberglass shell. The 4Runner also known as Toyota Hilux Surf in Japan began as a compact SUV and evolved into a cross between a compact and mid-size SUV.

The 4Runner is a spacious, comfortable, and capable car that is built for both on and offroad. Its body-on-frame chassis, locking differentials, and four-wheel drive enables it to maneuver different terrains at ease. The 4Runner is now on its fifth generation from 2009 and continues to evolve.

Here we take a look at how far it has come since its introduction in 1983. Please read on.

The first-generation 4Runner was unveiled in the last quarter of 1983 as a 1984 model. It was a two-door car with a removable hardtop made of fiberglass shell covering its bed. Its facial featured a 3-segment style grille, rectangular headlights, and turn signals beside the headlights and on the bumper. At the rear, it had a tailgate-style rear door, with some models having a rear tailgate with a retractable windshield.

This 4Runner model was available in two trims. The first one was a two-seater that looked like a pickup truck with its rear cargo area covered with fiberglass. This trim was specifically aimed at hauling more cargo than passengers. The second was a five-seater that had a rear seat that could accommodate three passengers but could also be folded flat if required to gain some extra storage space.

The first generation 4Runner came fitted with a carbureted 2.4-liter (22R) inline-4 petrol engine with 105 hp and 136 lb-ft of torque. This engine was paired with a five-speed manual transmission with a two-speed transfer case. This model came with a 4WD drivetrain with manual locking front hubs as standard.

Earlier models of the 4Runner came with solid front and rear axles with leaf springs. Later releases saw the solid front axle being replaced by independent suspension to enhance comfortability and maneuverability.

Toyota unveiled the second generation 4Runner late in 1989 as a 1990 model with a closed bodywork that replaces the removable rear roof section and the rear fiberglass shell. This helped solve some of the issues of the first-generation vehicle by making the cabin quieter and weatherproof. This change also saw the car being offered as a four-door or the previous two doors.

This 4Runner like the previous model was still based on the HiLux pickup frame but with some features that made it comfortable and an excellent car for daily use. The four-door option made the 4Runner a suitable family car but with the same rugged features.

Exterior features of this generation included a flat front fascia, a grille with chrome lining at the top, and short overhangs. The tailgate was opened by flipping downwards similar to the pickup, while the rear window slides inside the tailgate.

The interior features a curvy dashboard that is simple and narrow. The instrument cluster is wide with some models having the climate control unit placed above the radio. This 4Runner has a low seating position, with two front seats and a rear split-folding bench.

Under the hood, this second-generation 4Runner was fitted with the same engines as its predecessor, which are the 2.4-liter inline-4 and an optional 3.0-liter V6. There are also optional diesel engines available. These engines are paired with a 4-speed automatic or 5-speed manual transmission.

Toyota introduced the third-generation 4Runner in 1996. It was a completely redesigned car built on a new platform, new chassis, new interior and exterior design, new engines, better safety equipment, and extra utility. This was the first 4Runner to not share body panels nor a frame with the Hilux pickup truck.

The changes on this generation 4Runner resulted in a car that is more refined while still preserving its rugged off-road ability.

New exterior features on this generation 4Runner include enlarged halogen headlights, chrome bumpers, a grille with chrome at the top, larger side mirrors, anti-chip rocker panel protectors, a one-piece lift-up tailgate configuration with a slide-down power window, and a stoplight integrated into the roofline.

The interior is more spacious, thanks to its superior wheelbase that grew by two inches than its predecessor. The car’s floor has been lowered and the doors made wider making it easy to get in and out of the 4Runner. The seats are comfortable and supportive, with improvement in rear legroom and cargo space.

This 4Runner model came fitted with 2.7-liter inline-4 petrol with 150 hp and 177 lb-ft of torque as standard, and 3.4-liter V6 petrol with 183 hp and 217 lb-ft of torque. These engines had much better power of about 30+ hp compared to engines offered in the previous models. These engines were paired with a 4-speed automatic or 5-speed manual transmission. The available drivetrain is either 2WD or 4WD.

The fourth-generation 4Runner was unveiled in 2002 following in the footsteps of its predecessors with body-on-frame construction and a robust drivetrain.

From the third generation, the 4Runner designers shifted their focus to designing a vehicle that catered to the daily driving needs, by making the car more comfortable and adding more amenities for all occupants. That drive continues on this fourth-generation model.

The exterior of the fourth generation 4Runner like previous generations still has those rugged looks, with a chromed/body-color grille depending on trim, new headlights, a power lift-up tailgate with permanent glass replacing the sliding down power window, and 16-inch (17-inch on the Sport Edition and 18-inch on the Limited Edition) light-alloy wheels.

This 4Runner’s wheelbase, length, and width grew by several inches which led to more interior space. The standard model came fitted with 5 seats with the 7-seat option reserved for the higher trims. The rear seat occupants benefit from the much better head, shoulder, foot, and knee room. This 4Runner has 1195-liter cargo space which is 68 liters less compared to its predecessor.

Other markets had two (1KZ-TE and 1KD-FTV) optional 3.0-liter inline-4 turbocharged diesel engines to choose from. These engines were paired with either a 4-speed or 5-speed automatic transmission. The 4Runner is available in a 2WD or 4WD drivetrain.

Toyota released the fifth generation of the 4Runner in 2009, continuing from where its predecessor left off. This 4Runner is a vehicle known for its off-roading abilities and trustworthiness, and so is this new model. Apart from that, Toyota’s mastery in engineering and fine-tuning made the 4Runner well-mannered and easy to maneuver on highways and in urban environments.

The exterior looks are way better compared to the fourth-generation model. Its facial features a blacked-out mesh grille with a chrome strip and angular headlights. On the sides, the signature 4Runner flared fenders are still present, and at the back, there is a roof spoiler fitted at the top of the tailgate.

Inside, the 4Runner has a nice and neatly designed dashboard with burly controls on the center console, and a sporty instrument cluster divided into three pads, which are the tachometer on the left, the speedometer at the center, and two (fuel and coolant temperature)  gauges on the right. The first and second-row seats are comfortable and supportive, while the third-row seats are a bit limited in space. This 4Runner has 1,217 liters of luggage space with all three-row seats in place, and 2,548 liters with first and second-row seats folded.

The TRD Sport model was released to cater to urban adventurers with style and flair, while the TRD Off-Road and TRD Pro trims are built for tackling rugged and tough terrain.

This 2022 TRD Sport 4Runner is armed with a 4.0-liter VVT-i V-6 petrol engine with 270 hp and 278 lb-ft of torque paired to a five-speed ECT-i automatic transmission. This 4Runner comes fitted with a part-time or full-time 4WD drivetrain that performs well, whether on the highway or on the trail. Optional features include Multi-Terrain Select and CRAWL Control.

The 4Runner has been a Toyota lineup mainstay for almost 40 years, and within this period it has been able to establish its place like the rough, robust, reliable, and ready-for-anything SUV that’s at home whether on pavement or where the pavement ends. The resale value of the 4Runner is very high as a result of its trustworthiness.

We at BE FORWARD have a stock of 500+ used Toyota 4Runner on sale. Please visit our online store and check out the stock for your liking.