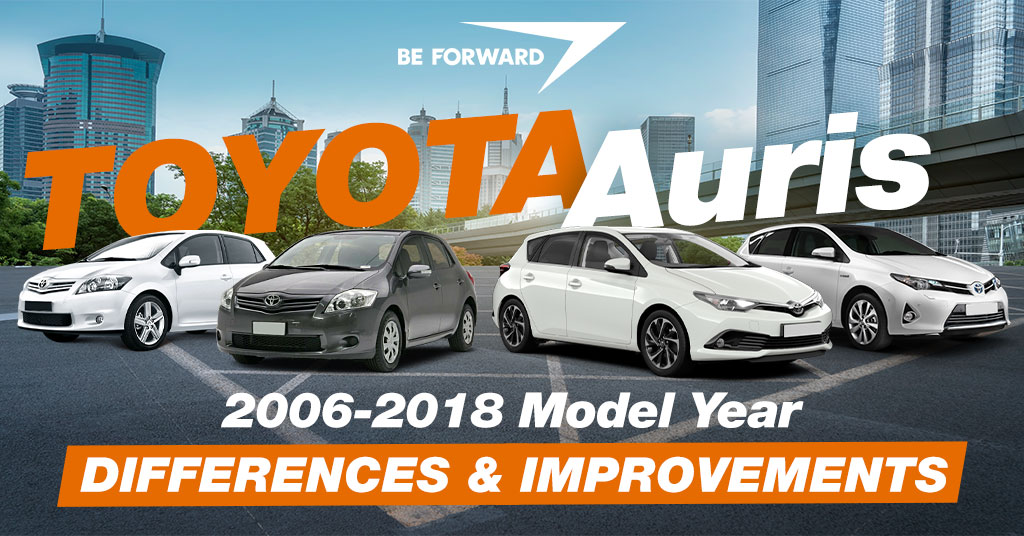 The Toyota Auris is a compact hatchback produced by the Japanese automotive manufacturer Toyota. The Auris was unveiled in 2006 and is currently on its third generation from 2018.
The timing of the release of the Auris was so timely as it positioned it as a successor to the Corolla Runx/Allex.

In this article, we are going to take a look at the three generations and the upgrades that happened in between to find out the little things that make each release so unique. Please read on.

With the Auris, Toyota introduced a new young and fresh design language. This new design features a front fascia with horizontal lines, that makes the car look sportier and wider. The lower bumper is fitted with a wide center grille with fog lights on the outer sides, while above it you find the angular-shaped headlights that give the car its personality. From the sides, the Auris looks a bit curvy with body panels that give the car a minimalist design look, but not dull. The first-generation Auris is available as a 3 or 5-door hatchback.

The cabin is well equipped, it features a quirky tall center console connected to the center stack via a sloped bridge to where the gear selector is located. At the top of the center console, there is a tray followed by two air vents and a multimedia system beneath it. At the front, the Auris is fitted with comfortable and supportive bucket seats, while at the rear there is a 60/40 split-folding seatback which is comfortable as well, and legroom is enough for an average build adult. The seat can also be folded to expand the cargo area.

The Auris is powered by either a base 1.5-liter DOHC 16-valve petrol engine (1NZ-FE) or a 1.8-liter DOHC 16-valve petrol unit (2ZR-FE). In 2009, the 1.8-liter (2ZR-FE) unit was replaced with the 2ZR-FAE valvematic engine, which is more efficient. These engines were mated with either a 4-speed automatic, 5-speed manual, 5-speed auto-manual (Multimode), or a 6-speed manual transmission. The Auris is available in FWD or 4WD.

The exterior featured new redesigned headlamps and taillights, the hood and front grille were restyled, and the front and rear bumpers were new as well.

The cabin received a makeover too, Toyota upgraded the finishing quality and materials, while the center console was rearranged to improve the ergonomics.

Under the hood, there is a choice of 3 (1.5-liter, 1.6-liter, and 1.8-liter) petrol and 3 (1.4-liter, 2.0-liter, and 2.2-liter) diesel engines, which were all equipped with Toyota’s Optimal Drive technology which improves fuel saving. On this 2010 Auris release, Toyota also introduced a hybrid version of the Auris, which was the world’s first full hybrid compact car.
The Auris Hybrid has the same combination of engine, motor, and batteries as the Toyota Prius. The average combined fuel efficiency of the Auris hybrid is 26 km/l.

The second-generation Auris was released in August 2012 as a 2013 model. This model looks sharp and features redesigned angled headlights with an aggressive look. The front bumper has a large cooling air vent at the center with air scoops on the sides, around the fog lights, and above it, you find the v-shaped grille that completes the front fascia. Depending on trim level, the Auris comes with either steel or light-alloy wheels.

The Auris has a 360-liter boot. Its rear seats split 60:40 and can fold flat to increase the boot space to 1200 liters.
The Auris has plenty of room, to get in and out is easy, and rear legroom is enough. The Auris is a five-seat car, but four adults will be much comfortable than five who will be squeezed.

The Auris comes with the option of a 1.5-liter petrol engine, or 1.8-liter petrol which is also used on the hybrid models. These engines are mated with either a 4-speed automatic, 5-speed manual, 5-speed MultiMode, 6-speed manual, or CVT transmission.

In 2017, the Auris received a mid-life cycle upgrade that gave it a new look, it also included safety equipment upgrades and improved powertrains.

The most noticeable change is on the front facial, where the bumper has entirely been redesigned, whereby the lower grille has extended to the two foglamp surrounds. The headlamps and the upper grille have been redesigned as well.

Technically, the Auris has also benefited from revised steering and suspensions that have improved ride comfort, car handling, and driver comfort.

In the 2018 Geneva motor show, Toyota unveiled the third generation of the Auris (Corolla E210) hatchback. This Corolla release comes in a slick look. Its exterior features include rounded bumpers, sharper lights, and wheels pushed into the corners, making the car more appealing.

The interior of the Corolla E210 is modern, its dash is well-built and features an eight-inch touchscreen display placed at the top. This system is user-friendly and, apart from the touch inputs, it also comes with plenty of buttons as well.

The front seats are spacious and comfortable, with several adjustment options, while at the rear head and legroom is so limited. Adults may struggle for comfort, but children will be fine. The boot area is not the best in the class, and it gets worse on the hybrid models, as batteries eat up the boot space.

From this review, we learn that the Toyota Auris is a dependable and reliable car which is a typical Toyota trait. But unlike many hatchbacks in this category, the Auris is also available in a hybrid version. Although many prefer the hybrid version, even the petrol-only and the few diesel options are also worth your attention.

Please visit BE FORWARD and check out our list of 130+ used Toyota Auris.