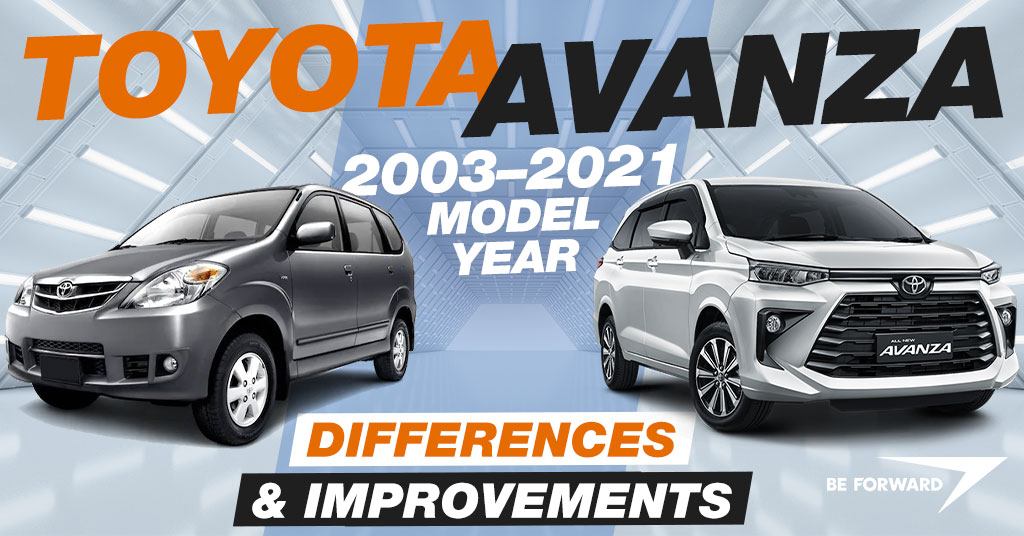 In the late 1990s, Toyota embarked on a joint project with its subsidiary Daihatsu to build a multipurpose vehicle (MPV). The result of this collaborative project was the introduction of the Toyota Avanza/Daihatsu Xenia.

The Toyota Avanza (Daihatsu Xenia) is a compact multi-purpose vehicle (MPV) marketed by Daihatsu  as Daihatsu Xenia and by Toyota as Toyota Avanza. The Avanza is mainly produced in Indonesia and was developed as an entry-level MPV.

There are three generations of the Avanza, with the current third-generation model introduced in 2021. Here we are going to take a brief look at these three Avanza generations and learn how they have evolved so far. Please follow through.

The first-generation Toyota Avanza was unveiled in 2003 for the 2004 model year. It was available in two trims; the J and G trim, with their main difference being the engine.

The Avanza is a five-door MPV with a front-engine rear-wheel-drive (FR) layout. Its facial features a short hood with a chrome strip where it meets the small grille with a Toyota emblem at the center. Underneath it’s fitted with a large bumper with an air intake at the center and fog lights on either end.

Inside, Avanza’s cabin is spacious. The front captain’s seats are comfortable and supportive, while the rear bench seat can comfortably accommodate three passengers making the car a five-seater. There is also enough head-, leg-, and foot room. At the rear, the cargo room is large enough to accommodate a small refrigerator, and if you need extra space to accommodate long items, you can fold the rear seat.

In 2006, the Avanza received a mid-life facelift. The changes were mostly cosmetic, they included a new interior, a redesigned grille, a redesigned front and rear bumper, and redesigned headlights and taillights.

In 2004, a special edition Avanza was introduced. This model came fitted with a 1.3-liter (K3-VE) VVT-i engine mated with an automatic transmission. Only 200 units of this model came out of the production line.

The second-generation Toyota Avanza was unveiled in 2011 for the 2012 model year. It was available in three trims; the J, E, and G trims.

Exterior changes on the second generation Avanza included an even and wider bumper, a large air intake opening on the bumper, redesigned headlights, new alloy wheels design, and more.

In 2015 the 2012 Avanza received its first mid-cycle facelift with changes including upgraded front and rear fascias, interior color, and head unit, with ABS/EBD now standard.

In 2019, the Avanza received its second mid-cycle facelift. The front fascia and rear fascia were touched again with the front fitted with thin split-styled LED headlights as standard and the rear receiving an update as well. Other changes included the introduction of a shark fin antenna, redesigned alloy wheels, digital AC control buttons, keyless entry, and new interior color.

The third-generation Toyota Avanza was unveiled in 2021 for the 2022 model year. Unlike the previous models that were based on the front-engine rear-wheel-drive (FR) layout, the 2022 Avanza is based on the front-engine front-wheel-drive (FF) layout built on Daihatsu’s New Global Architecture (DNGA), supported by a full monocoque frame, unlike the previous “unibody” frame.

This 2022 Avanza is more modern than its predecessors, with plenty of modern features on all fronts.

The exterior design has changed significantly, the styling is impressive, and it surely is a head-turner Exterior changes include new LED headlamps, a large lower grille, a large redesigned bumper, shark fin antenna, and 15-inch alloy wheels. The Avanza is now 7.7-inches longer, 2.8-inches wider, and the wheelbase is 3.7-inches longer.

The cabin of the 2022 Avanza is roomy, thanks to the car’s exterior dimensional growth. This model is a seven-seater with seats arranged in a 2:3:3 configuration. The seats are comfortable and supportive, and they provide enough leg-, knee-, foot-, and shoulder room. Unlike the previous model whose seat could not fold flat and had gaps in between, the 2022 Avanza’s rear seats can fold flat with no gaps in between creating an enormous amount of space for cargo.

Features found on the top-spec Avanza include an 8.0-inch infotainment system with Apple Carplay and Android Auto.

The 2022 Avanza is powered by either a 1.3-liter or 1.5-liter inline 4 Dual VVT-i 16V DOHC petrol engine. These engines are paired with either a 4-speed automatic, 5-speed manual or dual-mode CVT transmission.

The Toyota Avanza is a compact and efficient multipurpose vehicle that can be used as a taxi, adventure car for large families, shopping basket for offices, and school shuttle. For all the years that it has been around, the Avanza has proved to be versatile, durable, reliable, and a true people mover.

Please visit BE FORWARD and check out our list of used Toyota Avanza on sale.