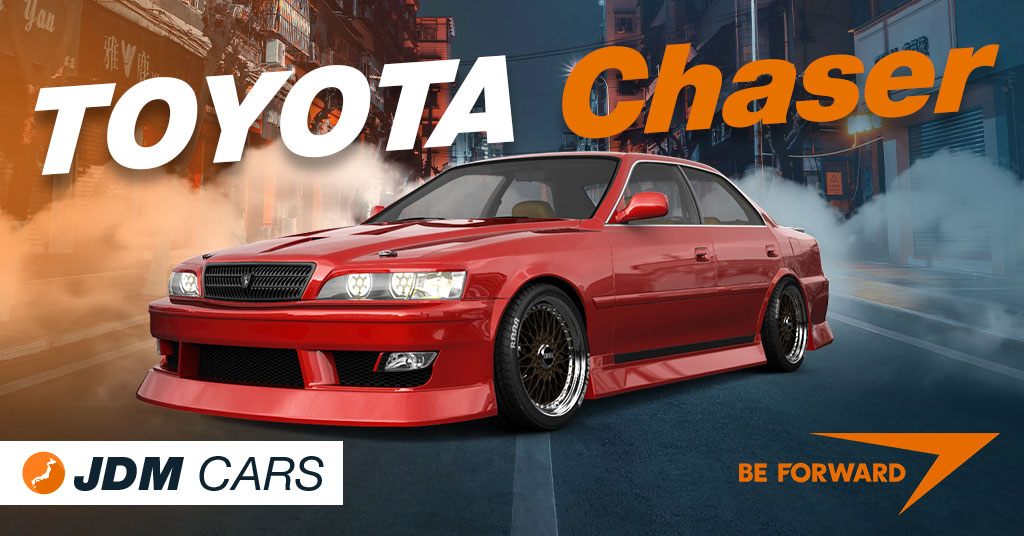 If you are a car enthusiast, you may think of becoming a proud owner of a JDM car. JDM cars are powerful and have modularity so you can figure upon them. Also, many motor-heads want to collect them because they are totally made for the Japanese Domestic Market (JDM). Today we are going to discuss the Toyota Chaser.

The Toyota Chaser was firstly made available in the market as a 1977 stock, sharing the chassis with Toyota Mark II and Toyota Cressida. Though it first came as a 2 door coupe and a 4 door sedan, but later in the second generation the coupe version was stopped.

The car was in production until the year 2000 and evolved for 6 generations. The first generation started from 1977 to 1980 with chassis X30, X31, X40, and X41. With an emphasis on the car economy rather than performance, the Chaser engine capacity was at 1.8L – 2.0 L for the 4-cylinder models and 2.0L for the 6-cylinder models. The front-wheel-drive further brought in fuel efficiency, by giving power to the front wheels. The Chaser and its platform allies are considered a class below the Crown, allowing Toyota to offer a sedan with a similar level of luxury.

The engine we are looking at today is Toyota’s 1JZ-GTE: a 2.5L, inline 6, 24 valves VVT-i beauty with a CT15B turbocharger.  It produces 280 lb. ft torque and 280 horsepower. The older version of this engine came with twin turbos, but the single turbo version is the better choice – increased fuel efficiency without a reduction in power.

This engine is available on the rear-wheel drive model only, but other engines are available with 4WD. The engine is mated to a 5-speed manual or 4-speed automatic transmission. There are 3 other low-power petrol engine options and diesel as well. The sixth-generation Toyota Chaser has 5 engine options which are; the 2.0L 1G-FE I6, the 2.5L 1JZ-GE I6, the 2.5L 1JZ-GTE turbo I6, the 3.0L 2JZ-GE I6, and the 2.4L 2L-TE turbo diesel I4.

The interior design of the Toyota Chaser set new standards in automotive luxury, yet also stresses functional convenience―as seen in such features as the low filling atop the instrument panel for ensuring better forward visibility, and the location of meters and gauges in a location conveniently distinct from the controls and switches. The interior is contented and roomy for a 5-seat roadster.

The interior color choice is black or dark brown each carefully designed for coordination with the exterior color schemes, to mirror both the subtlety and the sophistication modern motorists seek in their cars.

As for the seats, 4 different types intended individually for the different model grades are available. While the Toyota Chaser is fashioned for a compact outer appearance, plenty of interior space has been provided, and expanded window areas have been incorporated to give the car a breezy, bright feeling. Comfort has also been improved through a quieter ride, achieved through a design that reduces engine noise as well as the roar and other types of annoying vibration. Seats with fine cushion and holding characteristics have been mounted in the Chaser, while the driver’s seat is vertically adjustable with rubber supports. Radio speakers are located in the door panels on each side, to greatly boost total excellence.

The free-flowing exterior lines set the car’s basic theme. The Chaser’s body styling is a harmony of innovative proportioning that pressures elegance and athleticism befitting a luxury-class personal car. The exterior is contoured for the best aerodynamic characteristics.

Another improvement in the Chaser body is the introduction of a much wider range of colors, including an optional silver metallic two-tone scheme and “tone on tone” finish―a gray metallic in the Super version to answer the modern tastes in colors of today’s motorists.

The Toyota Chaser has undergone six-generation until today and every generation has its own taste.

First-generation started in July 1977 with chassis codes X30, X31, X40, and X41, and changed from the X20 generation Mark II GSS hardtop coupe. They were motorized by the 4-cylinder 1.8L 3T-U, 13T-U, and 2L 18R-U, and the 6-cylinder 2.0L M-U/EU engines – all single cam engines set for clean emissions and economy rather than performance. The Chaser is a lightly reshaped Toyota Mark II, with a wider front grille and without parking lights. The Chaser also has taillights of a different design.

The production started from 1980 – 1984 and production changed to the X60 Chaser in 1980, with the addition of the new 2.0L 6-cylinder 1G-EU single-cam petrol engine and a 2.2L 4-cylinder L-series diesel engine. Body styles offered were a 4-door sedan and 4-door hardtop, no longer offering the 2-door hardtop with this generation (replaced by first-generation Toyota Soarer).

The third generation first appeared in August 1984. The “Avante” series introduced before became a luxury advancement starting in this generation and body styles were reduced again to a 4-door hardtop only. The exterior dimensions of this car were somewhat smaller in comparison to sister cars Cresta and Mark II, but the Chaser was more performance concerned while maintaining the luxurious interior and advanced features of the Cresta.

Fourth-generation started from 1989 -1992, In 1989, the X81 series of Chasers were presented to the Japanese market. The following version was offered: XG, SXL, XL, Raffine, Avante Twin Cam 24, Avante, GT Twin Turbo, and Avante G, with the GT Twin Turbo model the most powerful variant, powered by the 1G-GTE engine putting out 154 kW; 207 hp (210 PS) at 6200 RPM. The Avante G model was the uppermost special edition model in terms of equipment.

From 1992 to 1996 the 5th generation introduced, the X90 Chaser replaced the preceding X81 Chaser. It had a bigger body, more engine power, and better handling. The body was wavier and the car was significantly longer. The Chaser lineup was largely carried over from the X81 Chaser except for the GT Twin Turbo, which was eliminated and replaced by the new Tourer V. The uppermost Avante G model received a 220 PS (162 kW; 217 hp) natural aspirated 2JZ-GE, the next evolution of the JZ series of engines after the 1JZ. Manual transmissions were non compulsory for all engine offerings, from the 1.8 liter 4S-FE and 2.4 turbo-diesel 2L-TE up through the 2.0 1G-FE inline 6 and 1JZ-GE 2.5 inline 6.

In September 1996 the 6th and last generation of the Toyota Chaser was introduced in the market, the X100 Chaser swapped the X90 Chaser. By this time, the Chaser had become a sportier sedan; for many, it was the conclusive Chaser and the best-looking model. The product lineup consisted mostly of Tourers, and Avantes with the Avante as the luxury model with more interior accessories and the Tourer as the sporty model with large 16-inch wheels. The 1JZ-GTE was motorized by a single turbo configuration instead of the twin-turbo of its predecessors. New to the lineup were the Avante Four and the Avante Four G Package, basically the Avante 2.5 L with a full-time 4WD system. These cars were available in 4-speed ECT (electronic control type) automatic transmission.

The Toyota Chaser is an enjoyable car that’s easy to live with for a fair fuel economy. If you are looking for the best JDM cars that you can purchase, Toyota Chaser is one of the high-end options. Importing them from Japan to anywhere is not a hassle anymore. All you need to do is to find an authentic dealer like BE FORWARD.

ALL TOYOTA CHASER FOR SALE