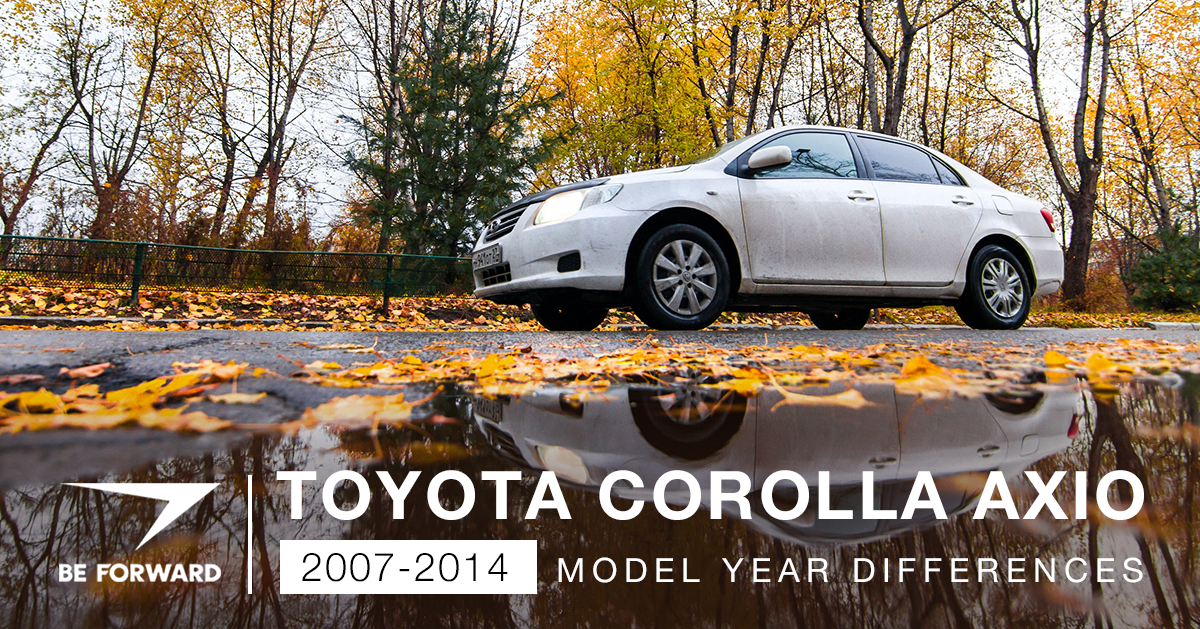 With great history, the Toyota Corolla has become a widespread model on a global scale. It first came out way back in 1966 and a sub-name was introduced by 2006, which is the Corolla Axio. The Corolla was created with three top priorities and that’s security, safety, and comfort.

The 11th generation model sedan “Corolla Axio” keeps in with the original goal of the Corolla to be a minimum sized car that four adults can travel long distances safely and comfortably. 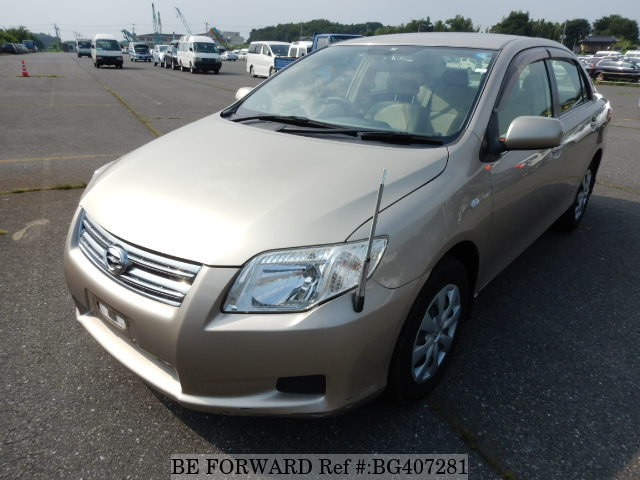 The 2007 Toyota Corolla Axio comes in making a splash in the industry, offering a combination of great features, powerful performance and incredible fuel economy. The ’07 Axio is offered in 1.5L and 1.8L engine displacements, delivering 110 horsepower and 136 horsepower, respectively. It can be driven in a FWD or full-time 4WD drivetrain.

Interior features that make the 2007 Corolla Axio so great may include privacy glass, and rear camera for safe driving in reverse. Other features may include power windows, locks and mirrors, as well as air conditioning and keyless entry.

Fuel economy is not sacrificed to provide such a great vehicle, as the 2007 Axio provides an impressive consumption rate of 16.2km/L to 18.2km/L 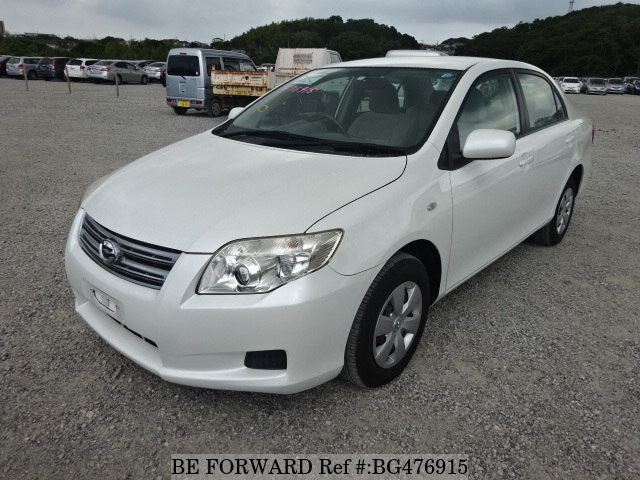 The 2008 Toyota Corolla Axio offers a wide variety of grades and engine displacement variations. Choose between the 1.5L engine with 110 horsepower, and the 1.8L engine with 136 horsepower. It comes in your choice of a 5-speed manual transmission, or a CVT transmission. Get around town with ease and comfort, and do it in style.

There is no shortage of featuers with the ’08 Corolla Axio, which delivers great equipment that may include a large center display with rear camera monitoring, push-start ignition, along with power steering, doors and locks. Standard features include anti-lock brakes and air conditioning. Depending on the variation you choose, you can count on the 2008 Axio to deliver fuel economy around 14.4km/L to 18.2km/L. 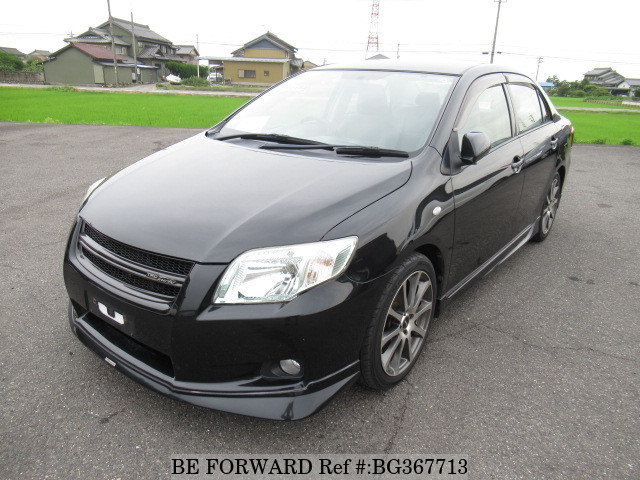 The 2009 Toyota Corolla Axio sees a slight boost in fuel economy, while delivering the same great performance, riding comfort and impressive feature set. With a capacity of 5 passengers, the ’09 Axio provides the space you need for an enjoyable road trip.

For higher end versions of the model year, expect equipment such as a woodgrain-trimmed center console, as well as side mirrors with integrated turn signal lamps, and even an air conditioner with pollen removal functionality. 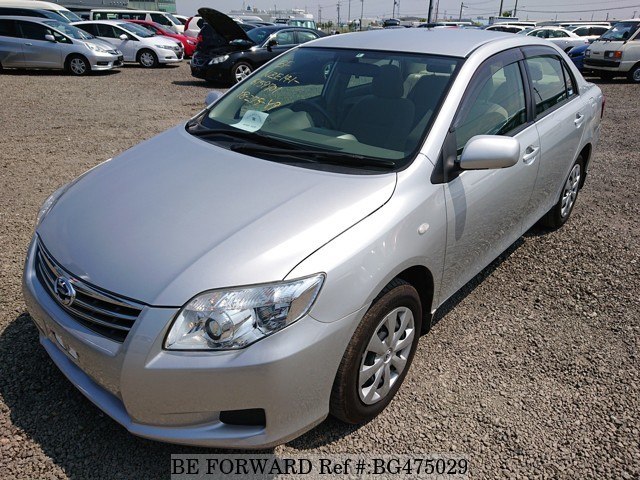 The 4-door sedan’s 2010 variations tend to offer a 55L petrol engine and fuel economy of around 5L to 6.4L per 100km making it well suited to long-commutes or highway driving. It has 2- or 4-wheel-drive drivetrain and comes with a choice between automatic or manual transmission. It has a good-sized boot at around 450L that expands to around 750L with the rear seats folded.

Exterior features include its rounded front and sleek lines, UV cut glass and wide windows offering good visibility and optional alloys. It has telescopic steering and tilt for the driver to make fine adjustment and maximize comfort for safe driving, as well as airbags and braking technologies for smooth handling.

The interior features options such as auto air conditioning, side airbags as well as driver and passenger airbags standard, and its spacious and comfortable cabin. 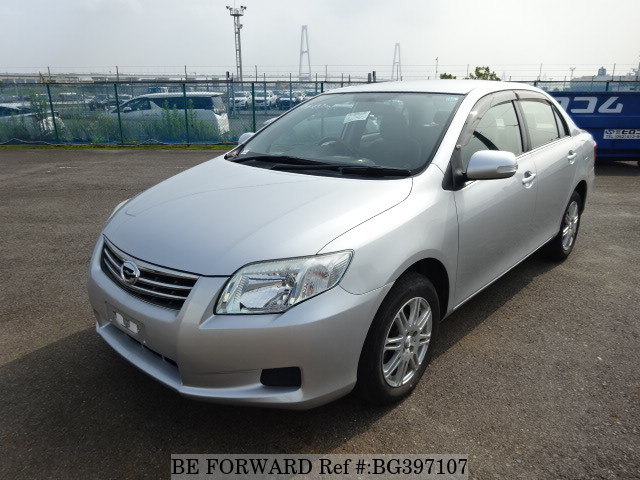 The 2011 Toyota Corolla Axio comes through with enhanced performance, coupled with improved fuel economy, which was already impressive to begin with. It’s 1.8L engine offers 144 horsepower in FWD mode, and 133 horsepower in full-time 4WD mode, while the 1.5L engine delivers 110 horsepower.

Some great features added to the 2011 Axio include woodgrain accents for the shift knob and steering wheel, along with thermal seating for a more comfortable ride in the colder months. 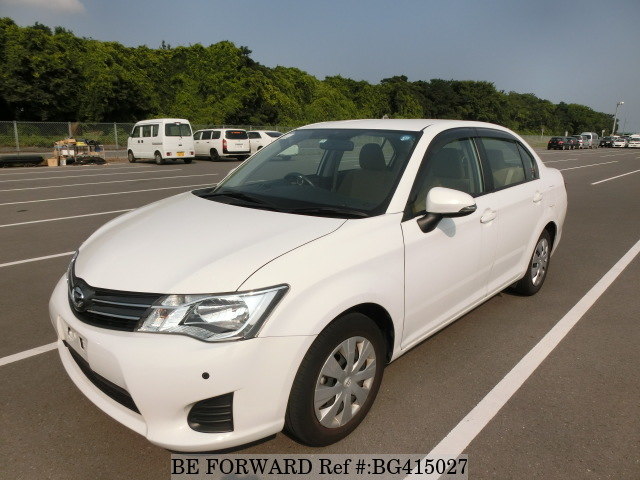 Variations of the 2012 Toyota Corolla Axio tend to offer a 55L petrol engine with good fuel economy of around 5L to 6.2L per 100km, as expected of the prudent and practical Corolla. It has a two-wheel drive drivetrain and manual and automatic transmission options. This sedan has ample boot space of around 450L that expands to 750L with the seats folded.

With wide and narrow body versions sold in different markets, the exterior has a classic stylish look, with redesigned looks in the front grille, bumpers, rear lamps and boot lid. Models come with the standard Toyota stability and traction control, as well as the complete package of airbags, earning it typically high safety ratings. Comfort is prioritized in the interior, with optional trims, cruise control, keyless entry and entertainment system packages, making it a practical and popular vehicle choice. 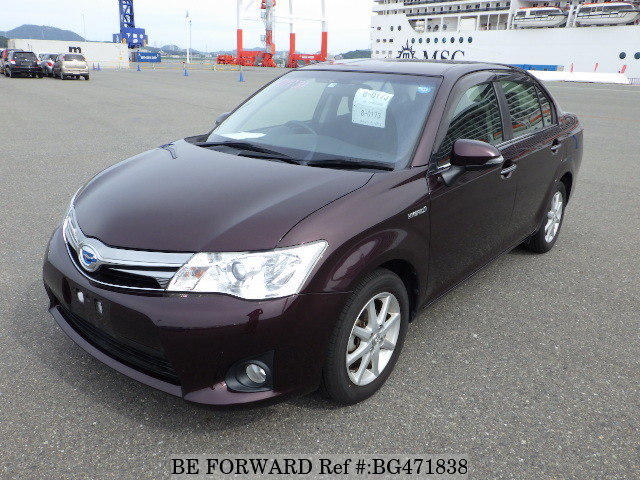 The sleek and comfortable 2013 Toyota Corolla Axio’s variations tend to offer a 55L petrol engine, with a hybrid option also available, and excellent fuel economy of around 3L to 5L per 100km, 2- or 4-wheel-drive drivetrain and automatic or manual transmission. It has a roomy boot at around 450L that expands to around 750L with the rear seats folded. This generation has a slightly smaller body than previous years, making it easy to park and navigate through tight spaces.

The attractive Axio features a stylish exterior and UV cut glass to reduce UV rays and help regulate cabin temperature, and comes with a range of optional extras such as fog lamps, alloy wheels and privacy glass on some versions. It has a full set of airbags standard for full-cabin safety, and Toyota’s Vehicle Stability Control system for improved handling.

The roomy interior features plenty of passenger leg and head room thanks to its refreshed design, center console control panel and neat electronic display panel to show mileage, petrol gauge and warning lights on some models. With a refreshed look in the new generation, the 2013 Axio retains the best of Corolla technology refined over the years, plus extras from the update. 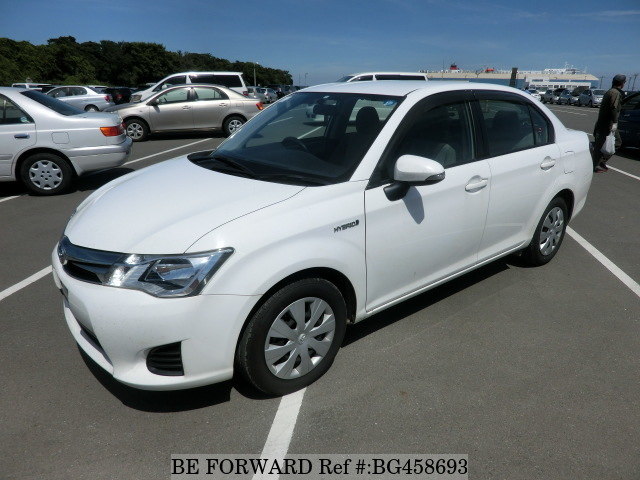 The 2014 Toyota Corolla Axio delivers in spades in the areas of comfort and build quality. The four-door, five-seater compact sedan offers a wealth of options that suit your needs, from features and functionality to fuel economy.

When it comes to features, the 2014 Axio has just what you need, equipment that may include a large center display, a CD player with radio, as well as air conditioning and power equipment with steering wheel-mounted controls. Safety equipment includes anti-lock brakes and airbags.

Fuel consumption rates for the 2014 Toyota Corolla Axio range between 16.4km/L to 20.6km/L, with a hybrid option delivering a whopping 33km/L in fuel economy.

Is the Toyota Corolla Axio Right for You?

The Toyota Corolla Axio is one of our top fuel-efficient sedans for under $1,500. See what other models made the list in our review here.