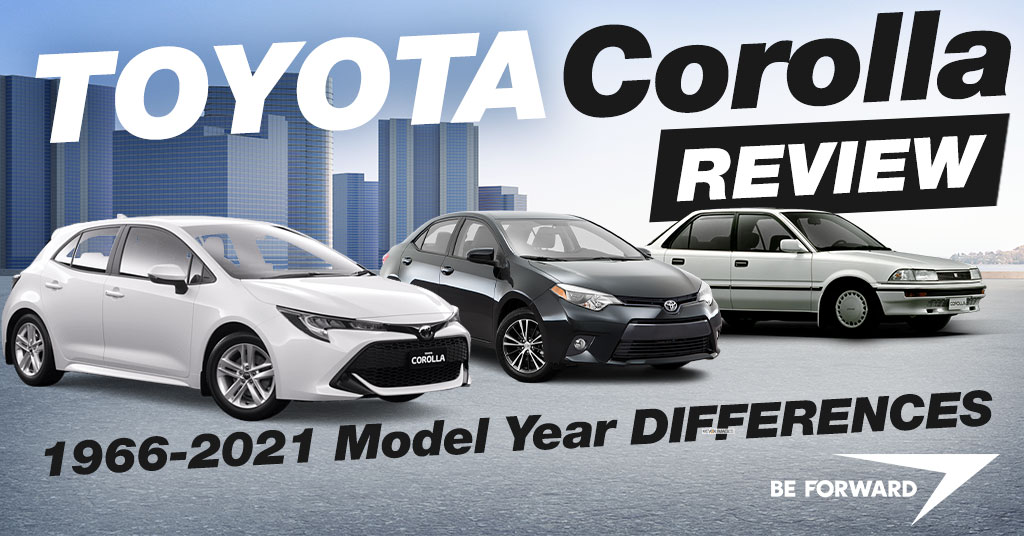 The Toyota Corolla is a series of compact cars (formerly subcompact) manufactured by the Toyota Motor Corporation.

Previous models were mostly rear-wheel drive, while later models have been front-wheel drive. 4WD drive versions have also been produced.

In November 1966 the 1st generation Corolla was introduced with the new K pushrod 1100 cc engine. In 1968 the Corolla Sprinter was introduced as the fastback version and exclusive to a Toyota Japan dealership retail outlet called Toyota Auto Store.

The Corolla E20 was released in May 1970, it was restyled and featured a more rounded body. In this generation, mutually exclusive Corolla and Sprinter names were used to differentiate between 2 slightly different treatments of trim and sheet metal. The Sprinter Trueno and Corolla Levin names were introduced as the enhanced performance versions of the Sprinter and Corolla respectively. They were fitted with a double overhead camshaft version of the 2T engine that was introduced in March 1972.

Other Austrasian markets were served with the Corolla KE20 which was available as a 2-door sedan, 4-door sedan, 2-door panel van (KE36), and 4-door wagon (KE38). These models were all fitted with a 3K engine and mated with a K40 4-speed manual or 3-speed automatic transmission.

Later KE5x models were introduced as a 4-door sedan or 2-door coupe (a true pillarless design) with 4K engine. Due to the addition of side impact protection in the doors, the KE55 was 50 kg heavier, but due to a change in the body metal and seam sealing, they are prone to rust. Later Corolla KE55 also used plastic-ended bumper bars as opposed to the all chrome bumpers of the previous models but included a back sway bar for the first time.

In March 1979 the 4th generation received a major restyle brought a square-edged design. The Corolla’s had a simpler treatment of the taillights, grille, and headlights while the Sprinter used a sculptured treatment, slightly more complex.

The 4th generation received a new A-series engine to the range as a running change. Also, this generation was the last model to use the T series and K “hicam” engines. As an extra-cost option on Japanese market vehicles, the Fuel injection was introduced.

Until June 1987 the van and wagon continued to be made after the rest of the range was replaced by the E80 generation.

The 5th generation started production in 1983 and received the redesign on a contemporary sharp-edged and a sloping front bonnet, no-frills style was brought in during May 1983. In this generation, the new 1C 1839 cc diesel engine was added to the range with the E80 Series. Re-badged E80 Sprinters were sold in the U.S. as the 5th generation Chevrolet Nova from 1985. As an extra-cost option internationally fuel injection was introduced.

In this generation, many engines were used on a wide array of models and trim levels, ranging from the 2E 1.3L to the 165 hp supercharged 4A-GZE.

The 7th generation started production in June 1991 and the Corollas received a redesign to be heavier, larger, and have a completely aerodynamic, rounded shape of the 1990s. The somewhat larger Corolla was now in the compact class in the United States, rather than subcompact, and the coupé was still available in some markets, known as the AE101 Corolla Levin. With this generation carburetors were mostly retired.

In May 1995 the production of the E110 Corolla started. This generation received a design that was slightly altered throughout but retained a look similar to that of the E100. In 1998, Non-Japanese Corollas received the new 1ZZ-FE engine for the first time.

The 1ZZ-FE engine had aluminum cylinder heads and an aluminum engine block, which made this generation powered by this motor lighter than versions powered by A-series engines that cast iron blocks with aluminum heads.

The 8th generation was delayed in North America until mid-1997 (US 1998 model year), where it had unique front and rear styling.

The 9th generation Corolla was introduced in Japan in August 2000 with a model code E120, with more technology and edgier styling to bring the nameplate into the 21st century. This version was sold in the Middle East, Japan, Australasia, and Europe.

In mid-2001, the E120 Corolla Altis received a refreshed look and was slightly longer and wider than the E120 for other markets, but with similar interior and body panels.

This is the 10th generation of cars sold by Toyota under the Corolla nameplate known as E140/E150. In this generation, the Corolla hatchback was replaced by the Toyota Auris in Japan and Europe but was still badged “Corolla” in New Zealand and Australia.

The Axio is equipped with Toyota’s latest intelligent parking-assist system, and a backup camera monitor is standard. The Luxel is the highest trim level, equipped with additional features such as Tiptronic transmission and Dynamic radar Cruise Control. The G mid-range model is powered by a set of projector headlamps, Push button start, a factory-fitted audio system with steering audio controls, automatic climate controls, and speedometer clusters with additional tachometer clusters.

From April 2014 the Corolla Altis was available in India in 2 engine forms, petrol and diesel engines. The 1.8L 2ZR-FE is powered by petrol and the 1.4L D-4D engine with variable Nozzle turbo and intercooler is powered by diesel.

On 24 March 2016, the Corolla E170 for the international market received a facelift. It features a full-width lower grille that houses the fog lamps, a thinner upper grille with a chrome garnish, and sleeker LED headlamps with new LED light guides. At the back, the tail lamps adopt new LED clusters and the chrome strip is thinner.

The 2018 – the present model Corolla is the 12th generation of the Corolla, a compact car (C-segment) manufactured by Toyota. This generation was introduced in 2018 and has also grown to include estate (station wagon) and hatchback configurations in addition to the saloon (sedan).

In 2018 at the Geneva Motor Show the Corolla E210 series was first introduced. The E210 Corolla is powered by a transverse engine powered by flex-fuel, petrol, or a hybrid of petrol and electric.

With a 1.6% global market share as of 2020, the twelfth-generation Corolla was the best-selling passenger vehicle in the world.

The 2022 Toyota Corolla is an attractive compact car that’s loaded with standard active safety features and has comfortable ride quality and sporty models of its own. The Corolla is offered as a sedan or a hatchback. Both have unique designs, but uncharacteristically the hatch has a smaller back seat and less cargo space than the sedan. Select models can be had with a manual transmission, and the sedan offers an exceptionally fuel-efficient hybrid powertrain.

Inside, the Corolla sedan and hatchback share a modernized dashboard and soft-touch materials. Most models have push-button start and passive entry.

Both models have a subscription-based Wi-Fi hotspot, and a touchscreen infotainment system with Apple CarPlay, and Android Auto. The large touchscreen bezel dominates the dashboard, but its various hard buttons and rotary volume, and tuning knobs help keep the driver’s eyes on the road during use. Top options include an upgraded JBL audio system and wireless charging.

The Corolla sedan uses a 1.8L 4-cylinder 139-hp that sends power to the front wheels through a continuously variable automatic transmission (CVT). The zestier versions have a 2.0L 4-cylinder, 169-hp that pairs with a CVT or optional 6-speed manual. Only the sedan offers a hybrid powertrain while all Corolla hatchbacks have a larger engine.

Toyota Corolla is among the legendary brand in the Toyota lineup which has a long outstanding history in the automotive industry. Corolla is the best-selling vehicle around the world and is the one among the vehicle that performs well in fuel efficiency, is easy to maintain, and has affordable running costs and reliability.

If you plan to purchase a Corolla, the 6th generation to the latest generation is suitable due to the technology equipped in those cars. If you want to purchase just visit BE FORWARD.