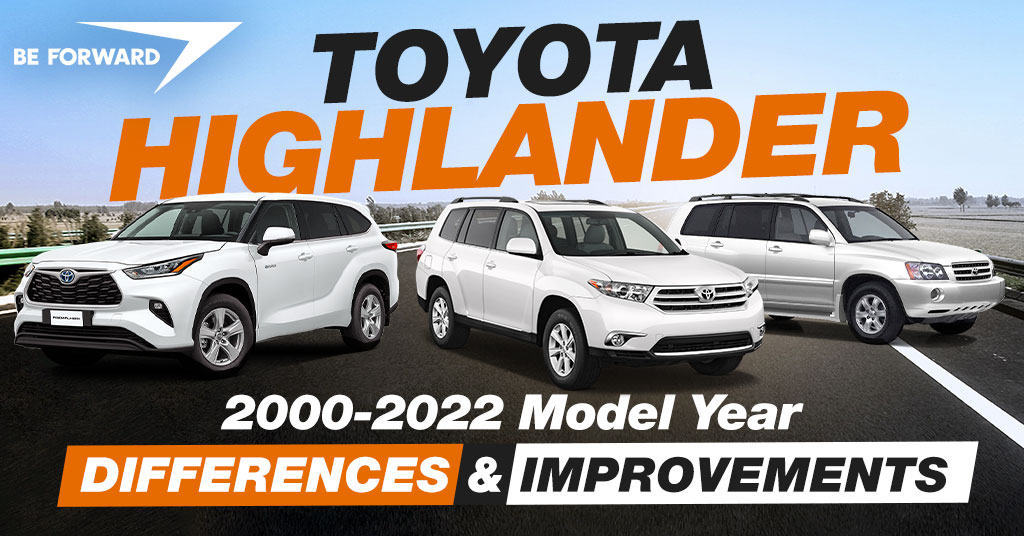 The Toyota Highlander (known as Toyota Kluger in other markets) is a crossover SUV manufactured by the Japanese automotive manufacturer Toyota.

The Highlander was unveiled in the year 2000 as a pioneer in the crossover SUV category, as one of the first car-based, mid-size vehicles. Initially, the Highlander shared the same platform with the Toyota Camry but with a much larger SUV-like body for the sole purpose of combining the comforts of a sedan with the utility and cargo space of a minivan, wagon, or full-size SUV. Over the years, the Highlander has evolved into a very different vehicle, gradually growing in size with the addition of new features.

Please read on to find out exactly how what the Toyota Highlander has become over the years.

In 2001, Toyota released the first-generation Toyota Highlander built on a Toyota Camry platform with a unibody structure that offered a comfortable ride. The original Highlander was a 5-seat car with the spare tire located inside the car. From 2004 the spare tire was moved from the interior to underneath the car at the rear, and in 2006 a 7-seat model was introduced.

The cabin is spacious with enough head, leg, shoulder, knee, and foot room for all of its five occupants. The seats are comfortable and supportive, and the dash features a small center console which was later replaced by a center console built into the dashboard. This Highlander has 1090 liters of cargo space that extends to 2305 liters with the rear 60/40 split-folding seats folded.

The second-generation Highlander was unveiled in 2007, it was still based on the Camry but grew by several inches in length, width, and height. Its wheelbase grew as well.

The exterior did not change much compared with the previous model, but for the 2011 model year, Toyota made several cosmetic changes which include a revised front end featuring new slim headlights and a prominent new grille, while on the sides a black rocker panel with chrome accents was evident.

This Highlander’s growth in size resulted in greater interior space, with better legroom for second and third-row seat occupants, as well as more shoulder room and headroom, and a higher hip point for more comfortable seating.

A key interior feature on this model was the second-row center-stow seat, which can be switched in when needed and switched out when not in use. The seat stows away under the floor between the driver and passenger seats.

On this release, the previous four-cylinder engine was phased out, with its place taken by a new 3.5-liter V-6 with 270 hp and 248 lb-ft of torque. The hybrid model was still powered by the 3.3-liter V-6 with 208 hp, which combines with an electric motor to produce a total output of 270 hp with AWD as the only drivetrain.

In 2009, a 2.7-liter four-cylinder petrol engine with 187 hp paired with a six-speed automatic transmission was available. And in 2011, the hybrid model received a new 3.5-liter V6 engine combined with a high-torque electric motor that produced a total output of approximately 280 hp. This Highlander release was available with  FWD or AWD drivetrains.

Toyota unveiled the third-generation Highlander in 2013 as a 2014 model. This model is longer and wider compared to the previous generation and features a design shift from being boxy to curvy.

This model features new styling cues which include a large grille, black louvers surrounded in chrome and a chrome strip running from either side of the Toyota logo, and the architectural headlight and taillight housings.

The 2014 Highlander is an 8-seat car. Its first two rows of seats are comfortable and spacious, while the third-row bench seat which now accommodates three passengers is best suited for children. Cloth upholstery is standard, with synthetic leather or genuine leather upholstery as options. Other features include heated and ventilated front seats, second-row captain’s chairs, and power-adjustable front seats.

The Highlander comes with a 6.1-inch or 8.0-inch Entune multimedia system with a touchscreen display, Bluetooth connectivity, and HD radio.

This Highlander model came fitted with similar engines to its predecessor. The highlander got refreshed in 2017, with the four-cylinder remaining untouched, but the V-6 was upgraded to produce 295 hp and 263 lb-ft paired to a new eight-speed automatic transmission.

The fourth-generation Highlander was unveiled in 2019. This model is built on the lightweight and highly rigid GA-K platform which is part of Toyota’s New Global Architecture (TNGA) unibody platform. It is available in five trims which are the L, LE, XLE, Limited, and Platinum Edition.

This Highlander’s length and width grew by 2.4-inches and the exterior design has changed as well with features such as sharp angles, a face with a razor-like grille, and LED projector headlights, while the LE trim comes with dark-finished headlights, taillights, wheels, and fog lamps. Optional features include extra chrome touches and black plastic rocker panels on the sides.

The 2019 Highlander is a three-row eight-seat family mover with comfortable seating, and plenty of standard features such as a 6.1-inch touchscreen infotainment system with Bluetooth, five USB ports, a CD player with six-speakers, a height-adjustable driver’s seat, a rearview camera, rear privacy glass, rear air conditioning, a 60/40-split fold second-row seat with a sliding mechanism, and a 60/40-split folding third-row seat.

The base Highlander comes fitted with a 2.5-liter inline-4 petrol engine with 185 hp (240 hp when paired with a motor on the hybrid model) and 184 lb-ft of torque paired with a six-speed automatic transmission and front-wheel drivetrain, and 3.5-liter V6 petrol with 295 hp and 263 lb-ft of torque paired with an eight-speed automatic transmission is standard on all other trims and optional on the LE. This V6 engine offers all-wheel drive as an option.

The Highlander Hybrid Bronze Edition was unveiled in 2022. This edition is based on the XLE trim, and slots in between the XLE and Limited edition but features bronze wheels, bronze badging, and bronze front-seat trim.

The 2022 Highlander Hybrid is comes fitted with a 2.5-liter inline petrol engine combined with the motor to form a hybrid system with a total output of 240 hp. This system is paired with a continuously variable transmission (CVT). The available drivetrain is either front- or all-wheel drive throughout.

Since its introduction in the year 2000, the Highlander immediately became a hot seller. It was slotted between the RAV4 and 4Runner and was purposely introduced to cater to a market that required vehicles that fuses the capability and versatility of a full-size sport utility vehicle (SUV) with the practical advantages of a seven-seat passenger car. The Highlander succeeded in this endeavor by offering the best of both worlds with lots of interior space, car-like handling, and light off-roading capabilities. As we have briefly seen from the above recollections, the Highlander has morphed into a very large and different vehicle within the years.

We at BE FORWARD have a stock of 400+ used Highlanders on sale. You are welcome to peruse and enquire about any vehicle on the list.