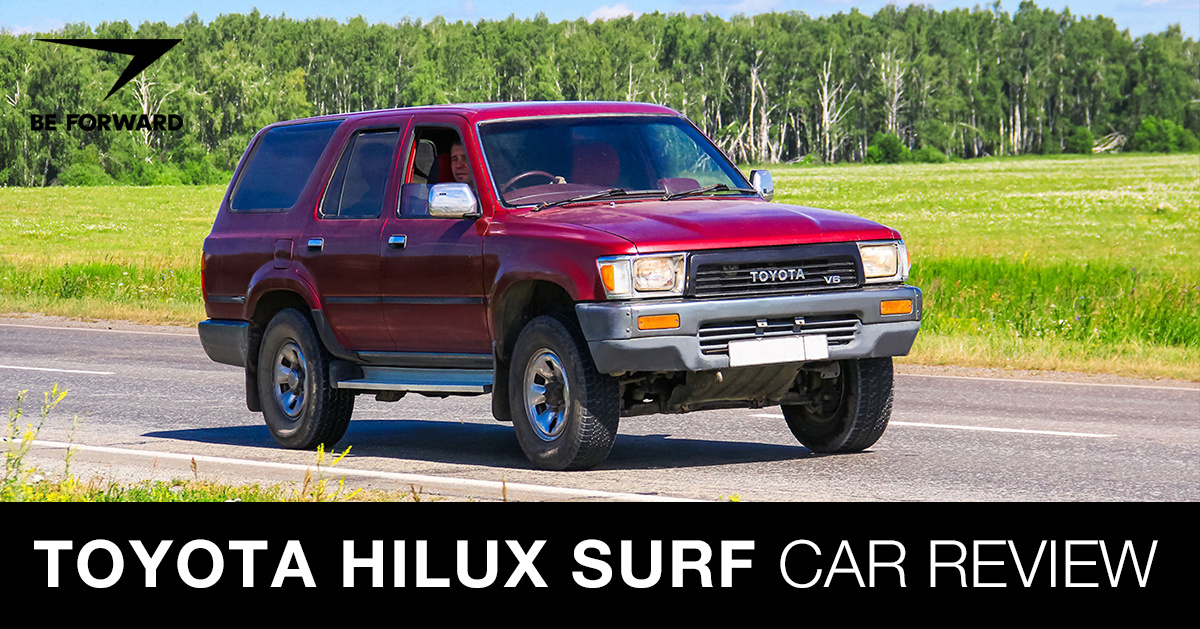 Today, the Toyota Hilux Surf, also called the Toyota 4Runner in some countries, is a midsize sport utility vehicle (SUV), but it wasn’t always that way. In the beginning, the Surf was little more than a compact Toyota pickup truck with the back of the cab removed, a couple of seats added in the rear, and a fiberglass cap. Eventually, the Surf underwent some major transformations to become one of the most capable SUVs available.

Is the Toyota Hilux Surf the SUV you’ve been looking for? Let’s take a quick look at the important points we will be touching on later in this article in the table below.

In terms of lineage, the first- and second-generation Toyota Hilux Surfs were based on the Toyota Hilux pickup, featuring pretty much the same engine and transmission options, as well as the four-wheel drive setup that makes the Hilux one of the most popular pickups in the world. Later, the third- and fourth-generation Surfs were essentially the Land Cruiser Prado chassis with a different body. The Toyota Fortuner and FJ Cruiser replaced the Surf when it was discontinued in 2009.

A Brief History of the Toyota Hilux Surf

The Toyota Hilux Surf was never produced outside of Japan, except in the United States, Australia, and briefly, the United Kingdom, where it was sold as the Toyota 4Runner. Though these capable SUVs have outlived their usefulness in Japan, they have become one of the most-popular African imports, but what has made them so popular? There are two reasons, plain and simple. First, it is one of the most capable SUVs on the planet, both on- and off-road. Second, and perhaps more compellingly, it’s a Toyota, and Toyota’s award-winning engineering and manufacturing principles have become the world’s mainstay for reliable automobiles.

The Toyota Hilux Surf might best be described, at least in its infancy, as a pure utility vehicle, so the pre-1995 Surf includes few frills. On the other hand, even earlier models are pretty much unstoppable off-road, which makes them a popular vehicle for people whose driving needs include plenty of off-pavement routes. As the Surf became more popular, its development began to diverge from the Hilux line, while keeping the Hilux name. From 1995 to 2009, which was the end of the line for the Surf, it was developed using the Toyota Land Cruiser Prado chassis, and therefore, providing more options for comfort and convenience.

Keep in mind that no matter what year of Toyota Hilux Surf you buy, this SUV was never a vehicle built for speed or excessive comfort. Perhaps the most popular Surf you’ll find are from the fourth generation, between 2002 and 2009, but you’ll still find plenty of pre-2002 Surfs running around, mostly because they simply refuse to die. As such, many of these owners may be hard-pressed to part with them.

These third-generation and earlier Surfs could be found with a range of small and somewhat-underpowered engines in both gasoline and turbodiesel variants, the diesel engines being more popular. Post-2002 models, however, are more abundant and, more importantly, feature the best diesel-engine option that Toyota ever offered in the marque.

The fourth-generation Toyota Hilux Surf, equipped with a 3L intercooler turbodiesel, generates 122 kW (163 hp) and 343 Nm (253 lb·ft), which isn’t fantastic, but capable nonetheless. The available gasoline-powered 4L V6 and 4.7L V8 engines are more powerful, though not as popular as the turbodiesel. Still, they are exceptionally fuel-efficient for their size and power output.

This power and torque is absolutely essential for the rough terrain that Surf owners need to navigate, as is the clearance provided by the high suspension. Still, the appeal of the Toyota Hilux Surf doesn’t end with performance and flexibility.

Inside, the Toyota HiLux Surf is a comfortable seven-passenger SUV. Typically outfitted with premium interior furnishing, such as comfortable leather seats and steering wheel, the Surf is as much a capable family cruiser as it is an off-road machine. The following features make the Hilux Surf an excellent value, even when purchased used:

Perhaps the only bad thing that can be said of the Toyota Hilux Surf is that it isn’t particularly new in comparison to its contemporaries. For example, for the same model year, the Surf may not offer as much power or convenience features as similar SUVs. Because the Surf stopped production in 2009, finding factory or genuine replacement parts could be a problem, but there are also plenty of aftermarket parts available on the market. Still, this Toyota SUV can’t be beat in terms of its combination of full-size sedan-like safety, reliability, and comfort, as well as serious off-road capability.