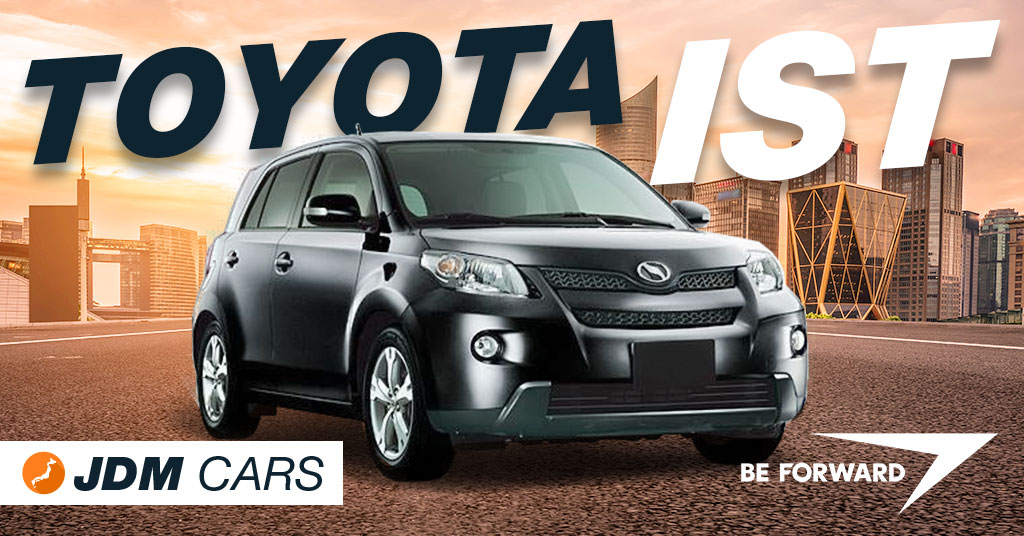 The price of used Toyota IST in the market varies from version, trim, and dealers while prices are reflective of average BE FORWARD prices as of June 2021 starting from USD 1,220

The Toyota IST is a subcompact car manufactured by Toyota. It is sold to the United States as the Scion xD and Scion xA, the Middle East as the Toyota xA, and to Europe and Latin America as the Toyota Urban Cruiser for the 2nd generation.

The IST, the 6th brand to use the Vitz as the standard model, was regarded as a high-end multi-use compact car with an SUV-like design and wagon-like spaciousness.

The IST name is derived from the suffix “-ist,” the name points to a person who is passionate about something (artist, stylist, specialist, and so on).

Toyota IST is classified as a supermini in England, B-segment in Europe, sub-compact in the USA. It’s a 5-door hatchback that is manufactured by Toyota, a Japanese automaker.

The 1NZ (1.5 liters) displacement is 1497 cc that can give you a maximum power of 81 kW (109 HP) at 6000 rpm. The fuel consumption of the 1NZ engine is approximately 23 km/liter (equivalent to 4.3 liters for every 100 kilometers) which makes it one of the most efficient engines when it comes to fuel consumption.

The 1NZ, 2NZ, and the 2ZR are 4-cylinder engines that are all fitted with the VVT-i (Variable Valve Timing with intelligence) Toyota technology which improves fuel consumption.

These engines are reliable and will not require any major maintenance before they reach 100,000 km for the 1NZ & 2NZ and 150,000km for a 2ZR engine. The recommended oil weights for these engines are 5W-30, 10W-30 (for all three engines) and 0W-20 and 5W-20 are other oils that can be used by the 2ZR engine. Recommended oil change interval is every 5,000 kilometers. These entire engines mated to a 4-speed automatic, 5-speed manual, or a 6-speed manual transmission (Europe market).

Toyota IST is a car that was built with the economic qualities of small Toyota cars, but also with the flexibility of SUV cars. The Toyota IST has some good sporty looks that appeal to the young and the old as well. It has some spacious and comfortable seating for five passengers, enough legroom, and a nice dashboard but when all seats are occupied, not much room is left for luggage. However, if the rear seats are not occupied, they can fold it flat creating more space for luggage.

There are storage compartments in the cabin that are valuable for keeping items such as documents, smartphones, and cups. At the front, there are door pockets, 2 cup-holders, a glove-box, and a center tray that reaches the back. The rear passenger’s storage options include door pockets and the front seat jacket pockets.

The exterior design combined the components of an SUV, like a wide fender aluminum arch and a large front grille. Moreover, by conquering a design that was uniform to the back windows, an advanced exterior was achieved. For sub-compact, the cargo space is somehow large and can carry medium-sized luggage. If extra space is required, the back seats must be folded flat. The boot space is sufficient for a family of 5 people.

The interior is expedient with a temperature control system that is centralized in many cases, though the modern models have individual temperature regulators on each seat. The power steering and power window further make small input produce a smooth and greater output. Hence the steering wheel and glass on the car door work to perfection in such a case.

A wide front grille containing 2 thick horizontal bars, large 15-inch tires, and extended wheel arches gave the car its dynamic and unique exterior styling. The body sizes were a notch above those of the Vitz, giving more space to the trunk and cabin. The solid body structure was appreciated through the advanced GOA (Global Outstanding Assessment) process, which enhanced safety in collisions with heavier vehicles.

The IST comes with steel or alloy wheels to support the tires with an image-boosting mechanism in hand. Another optional item is the roof rail that gives the car a tough look enhancement and luggage carriage ease. The taillight and headlight illuminate the road with LED effect in multiple trims so whether it is foggy and/or night drive the experience is never low grade.

The features are fully loaded inside out which makes the vehicle have a tantalizing effect on passengers and onlookers (passer-by).  Toyota IST is a mini world, having all it takes to make a classy experience making.

The Toyota IST has a good safety rating. It boasts itself with a robust body structure that was realized through the advanced GOA (Global Outstanding Assessment) process by Toyota, which improved its safety in collisions with heavier vehicles. Toyota IST is fitted with safety belts for all passengers.

Other features include a leather steering wheel, automatic mirrors and windows, 6 airbags, an auto-climate air conditioner, leather seats (for some models), and good cabin storage options.

The Toyota IST is suggested for people in the market for a small car that looks impressive and more compact on the road than other small hatchbacks. The IST appears to meet the style and design needs of many people with an eye for aesthetics.

The running costs are low and you can run errands all day on a relatively small amount of fuel. The IST is also best for young professionals, small families, and people who need to run errands affordably.