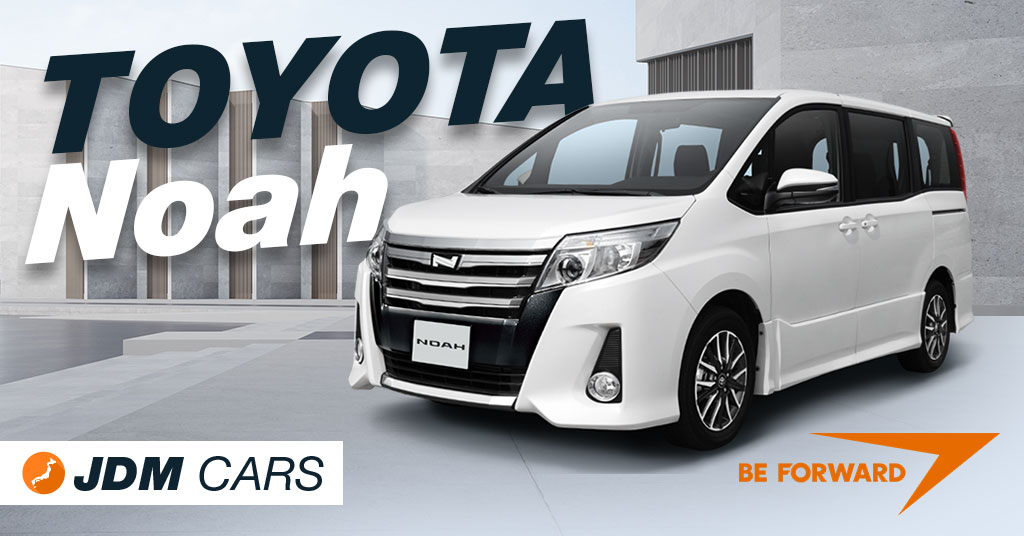 The Toyota Noah has always been intended to be a luxurious MPV but affordable. The prices of used Toyota Noah in the market varies from version, trim, and dealers while prices are reflective of average BE FORWARD as of June 2021 starting from USD 930

As early as the 1930’s automakers began to recognize the need for an MPV that was also multi-purpose. Earlier design attempts were more like pick-up trucks and didn’t offer the car-like handling that consumers wanted. Toyota took up that challenge and started making its cars bigger, constantly changing its vehicles to keep up with the ever-changing whims of the market.

They finally in 2001 made the Toyota Noah, a minivan that is fresh and appealing across each of its 3 generations to date. Noah’s popularity and growth in the Asian market have also begun to increase into other global markets. In this in-depth Toyota Noah review, discover how it stands out in the market for used family cars and why exactly it’s becoming so famous.

The Toyota Noah came as the updated and more passenger-friendly version of the Toyota LiteAce, a solid delivery vehicle that had been in production since 1970. Toyota took this freestanding delivery van and changed it to focus on families who need the size of a van and the driveability of a sedan. They decided to use the Toyota Noah to fill the useful gap between the Toyota Sienta and the upscale Toyota Alphard.

During the design stage of the Toyota Noah, engineers were challenged to create a multipurpose MPV that could seat between 5 and 8 passengers, yet offer plenty of cargo space and outstanding fuel economy.

Toyota Noah is a 7 seat minivan with 2 rear sliding doors and available in different colors but mostly are Silver, Black, and Pearl White.
The 1st generation of Toyota Noah was in production from 2001 to 2007. From 2007 to 2017, the 2nd generation Noah was in production with model code R70. The 3rd generation with the code R80 was introduced in 2014. For the first time, an engine start-stop system is used to improve fuel efficiency. It is the first Toyota MPV to have one-touch sliding doors. Toyota Noah is a famous brand in some Asian, African, and Latin American countries where it is used as a commuter, tourism car or family car. (Articles should not be specific to Tanzania as they are read by a wide world audience and BE FORWARD sells vehicles in different parts of the world)

The interior of the Toyota Noah is well designed with comfortability and features that ensure the driver and passenger are comfortable, safe, and well supported.

The climate and audio control are placed within the driver’s reach, allowing the driver to access them without having to look at them. In particular, the gear handle is situated right next to the steering wheel and the handbrake lies just underneath.

In terms of passenger comfort, Noah’s higher grade comes with excellent windows and power seats. To ensure that you can easily get in and out of the car, the Noah is fitted with single-touch dual sliding rear side doors.

The Toyota Noah is a large car that can carry up to 8 full-sized adults and their luggage. The higher, upright seats provide for a natural seating position and are comfortable for long-distance driving. In the first row, the passenger and driver are afforded good space and a good view of the road. Both seats are electrically or manually adjustable and even tall people have enough space. The second and third rows have good space as well, with excellent shoulder room.

The high-graded version of Noah is much more luxurious with extra padded seats, beige interior, and captain seats on the second row. The one major gripe the Toyota Noah has is the instrument cluster that is placed in the middle of the dashboard.

There are numerous storage sections that are valuable for storing items such as beverages, goggles, handbags, smartphones, etc. For the 1st row, there are door panel storage, a storage shelf below the dashboard, 4 cup-holders, a glovebox, and a center box. Front seat jacket pockets are only available on the second row. For the third row, there are storage spaces on the side panels.

The cargo space is slightly small when all the 8 seats are in use. It can carry medium-sized luggage such as boxes and suitcases. The second and third-row seats can be folded up to create extra cargo space. In this setup, the Toyota Noah can carry large-sized luggage such as a cooker, a big fridge, beds, and more. The Noah is a true multi-purpose vehicle thanks to its ability to carry both people and luggage depending on the need.

From the outside, the Noah looks boxy and tall with sharp looks. The Toyota Noah mostly comes with steel rims with alloy rims as an option.

Toyota is known for designing engines that offer great power, class-leading fuel economy, and outstanding reliability. Below are some of the engines found on the Noah

These engines are cheap to maintain, with affordable services and spare parts. With a small engine and considerably fast speeds, the Noah provides an opportunity for buyers who want to save on fuel without compromising on speed. The Toyota Noah’s driving system has been changed to front-drive and its torque output has improved dramatically.

The average fuel consumption of a Toyota Noah ranges between 12.6 km/L and 23.8 km/L, depending on the model year.
For the hybrid Si trim package, fuel economy jumps to 23.8 km/l; a fuel rating that places the Noah close to the top in the MPV class.

The Super CVT-i transmission also comes in handy if you’re looking for great fuel efficiency while on the trip. The Toyota Noah is designed with better fuel economy and means that you don’t have to keep checking the fuel gauge as you drive. This ensures that your driving experience is not disturbed by lengthy unnecessary stops at the pump.

The Toyota Noah has some safety and standard features like rear Dual Sliding Doors which make embarking and disembarking an effortless exercise. SRS Airbags help to protect the front passenger and the driver in a frontal collision. Installed in the right side of the dashboard and the steering wheel hub, they inflate and deflate within a fraction of a second. VSC helps the car to maintain traction and control by reducing or completely cutting—power sent to the wheels. Traction Control (TRC) helps when a slip is detected. That is when one wheel spins faster than the others the ECU takes over the hydraulic control unit it then applies the brake to the wheel that slips in quick succession.

If you are interested in purchasing a Toyota Noah or any other vehicle from Japan, we, at BE FORWARD are here to help!

ALL TOYOTA NOAH FOR SALE