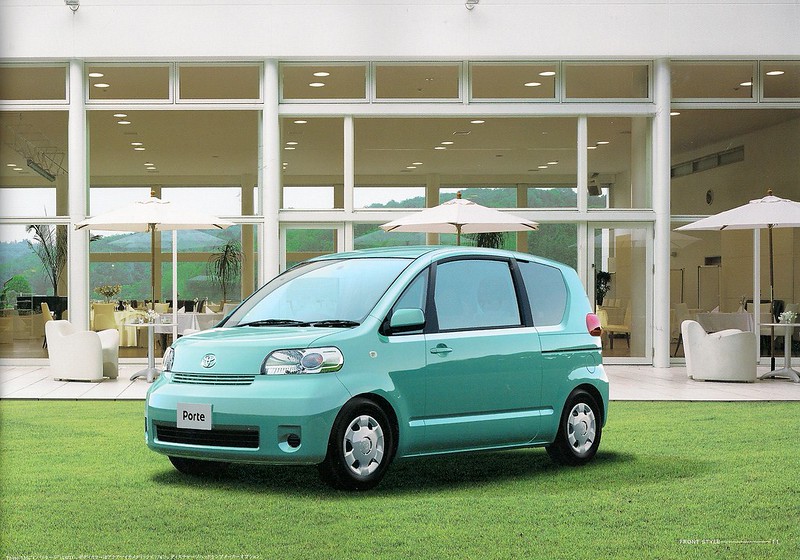 The first generation of Toyota Porte entered the car market in Japan only. This is one of the mini Multi-Purpose Vehicles (MPV) produced by the Japanese automaker Toyota with the passenger-side powered by an electric-powered sliding door, similar in approach to the Toyota Sienta and Toyota Isis.

After the production of the first generation of Toyota Porte in July 2004, the car was only available in the Japanese market produced with a right-hand drive conventional swing open type door.

Toyota Porte is now in its second–generation produced from 2012 to the present. Now, let’s take a look at both generations of the Toyota Porte.

As mentioned above, the first-generation of Toyota Porte was produced from July 2004 to 2012 with a right-hand drive and either a 4-seater or 5-seater versions, equipped by a 1.3-liter (2NZ-FE) or 1.5-liter (1NZ-FE) petrol engine with 4-speed automatic transmission. Toyota Porte comes with a 3-door hatchback body style with an ability to curb weight of 1,090 – 1,200 kg which makes the vehicle stable on the road while you drive.

As discussed above, we notice that the second–generation of Toyota Porte produced since 2012 gained a new design. It should be noted that this generation is also known as Toyota Spade.

In 2015 Toyota decided to drop off the uses of the 1.3-liter engine and instead came with the newer 1.5-liter 2NR-FKE engine which uses the front-drive wheel layout. According to the JC08 test cycle, this model has a fuel efficiency of 22.2Km/L.

Both the first and second-generation are spacious inside which gives the passenger and driver comfortability while they are on road. Having good ground clearance provides the chance of the car to be stable on the road while you are at high speed. Round roads are the challenge in African countries where the market for these kinds of cars is higher.

The availability of its spare parts is very easy and the maintenance cost of Toyota Porte is affordable by owners. Also, you can buy spare parts at our store by visiting the Auto Parts Store and get what you need.

The price of the Toyota Porte starts from 2,043 USD to 11,338 USD according to the year of manufacture, trim, color, and mileage. You can find your choice at our store BE FORWARD.