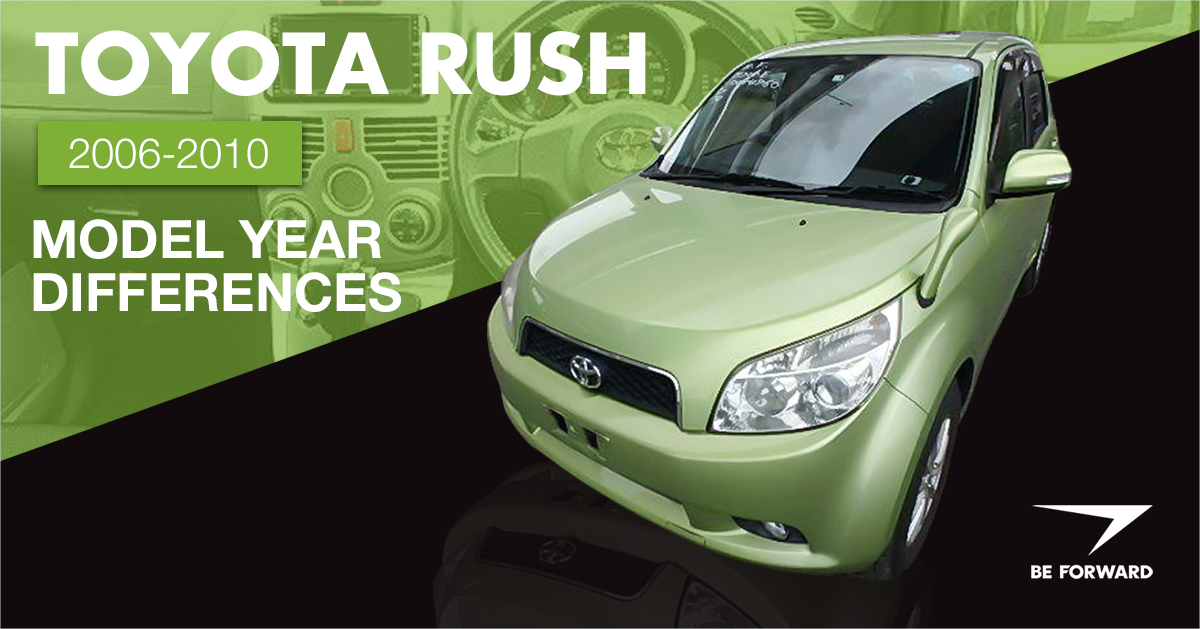 The Toyota Rush can be described as the best compact Sport Utility Vehicle. It combines three important factors: the performance of a Sport Utility Vehicle, the convenience of a compact car, and the functionality of a wagon. Daihatsu produced and developed this model for Toyota.

For those after an SUV that fuses fun, functionality, and user-friendliness, the Toyota Rush is a great option thanks to its wide range of color choices, youthful exterior, and ease of use.

Let’s look at the key years in this underrated compact SUV’s history, by examining the Toyota Rush between model years 2006 to 2010.

The 2006 Toyota Rush burst onto the scene, offering a much-needed change of pace from the norm that is typically seen from the compact SUV market with its long wheelbase and accompanying “cheerful” aesthetic. One of the biggest points of appeal with the 2006 Toyota Rush, by far, is its amazing fuel economy. The fuel consumption rate for the ’06 Rush ranges between 14km/L to 15.2km/L, an impressive rate for an SUV in any class. 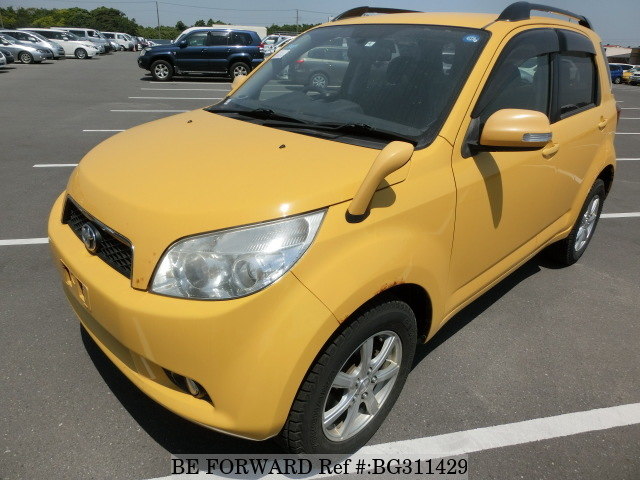 The 2006 version of the Rush comes in a 1.5L displacement engine, available in a 4-speed automatic or 5-speed manual transmission. With this 5-door 5-seater, you can also enjoy rear-wheel or full-time 4WD drivetrain options.

Some important features of the 2006 Rush may include a sound system with CD and DVD playback capability, accompanied by a center display screen with TV playback. Other features might include power windows, locks and steering, as well as air conditioning. Safety features include an anti-lock braking system and airbags.

The 2006 model year Toyota Rush is an amazing debut for the SUV.

With the 2007 Toyota Rush, you can look forward to a ride like no other. The ’07 Rush offers seating that gives you a commanding view of the road, while also offering a minimal body roll that is quite impressive for an SUV of its size. This model seats a maximum of five passengers, two in the front with space in the rear seating for three. 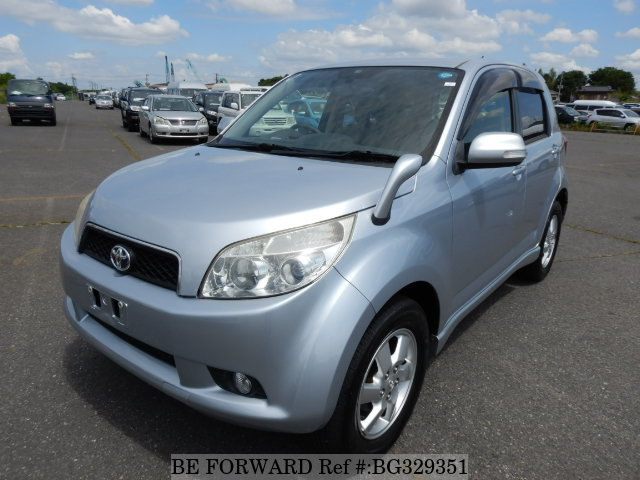 The refreshing looks reflected in even the simplest details such as the dashboard and gearshift, help the 2007 Toyota Rush do its part to reinvigorate the aesthetic landscape of the SUV market.

With a great engine/transmission configuration selection, you can easily find a Toyota Rush that ‘s right for what you need an SUV to do, thanks in large part to its great headroom, as well as its amazing interior legroom in both the front and rear of the vehicle.

There are plenty of great features to be enjoyed with the ’07 Rush, such as air conditioning, power steering and sound system with center console display. Enjoy power features such as windows and locks. Some 2007 Rush models offered at BE FORWARD will even come with a back tire.

The 2008 Toyota Rush continues in the model’s progression to being a top option for shoppers in the market for a compact SUV. It’s 1.5L inline 4-cylinder engine delivers 109 horsepower of performance, and comes in your choice of either a 4-speed automatic or 5-speed manual transmission. 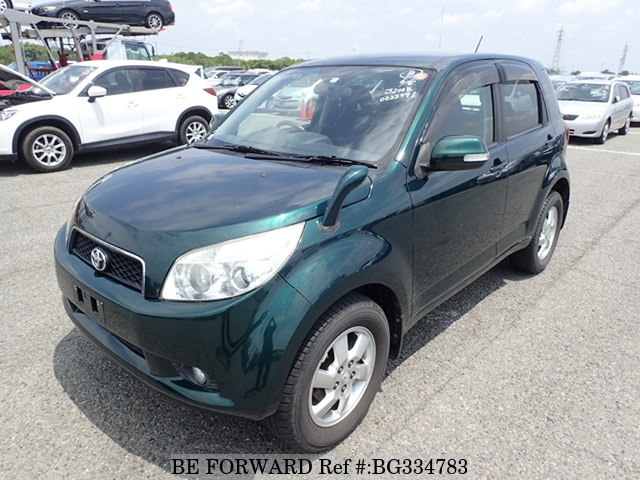 With a fuel consumption rate of between 14.8km/L to 15.4km/L, the 5-door, 5-seater 2008 Toyota Rush continues to stand out from among the pack. Its aerodynamic design helps to achieve this high fuel economy. Furthermore, the ’08 Rush is well equipped for light off-road demands, thanks to an available full-time 4WD drivetrain, while rear-wheel drive is also available for regular commutes throughout the city.

Some interior features include suede-like upholstery for maximum comfort, along with a 4-speaker stereo system with radio and CD-playback capability. Safety features include anti-lock brakes, electronic braking force distribution, as well as airbags. The 2008 Toyota Rush proves to be a step forward for the model, even in such a short life span.

The 2009 Toyota Rush continues to deliver incredible performance without wavering on style or functionality. Bringing a fresh sense of sophistication along with a solid range of features, the ’09 Rush highlights comfort, convenience and safety. 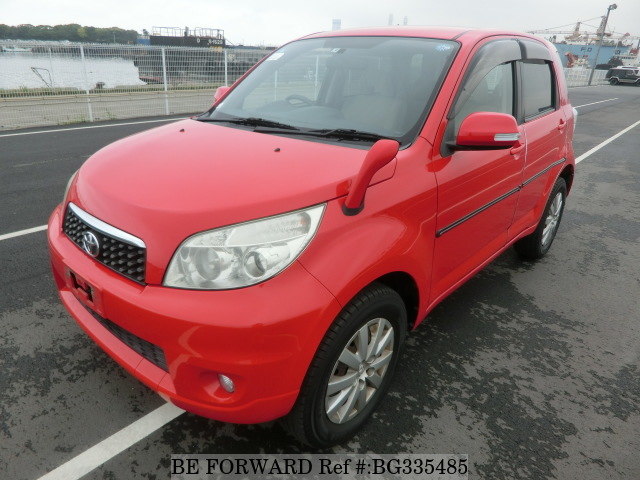 BE FORWARD offers 2009 Toyota Rush models that are packed with features to give you the best driving experience on the road possible. Some of these features may include a full sound system with CD player, as well as a large center dashboard display with TV-playback capability.

In addition to standard equipment like an air conditioning system, you can enjoy power equipment such as steering, windows, as well as central locking. Safety equipment includes airbags, along with anti-lock brakes. Some models offered by BE FORWARD might include a jack and wheel spanner so you can change a flat tire with ease.

The 2010 Toyota Rush is offered with some cool choices available for you to make this amazing ride your own. One of those choices is a wide array of color options that includes special colors plum brown, as well as pearl crystal. Stand out from among the rest on the road with a unique Toyota Rush. 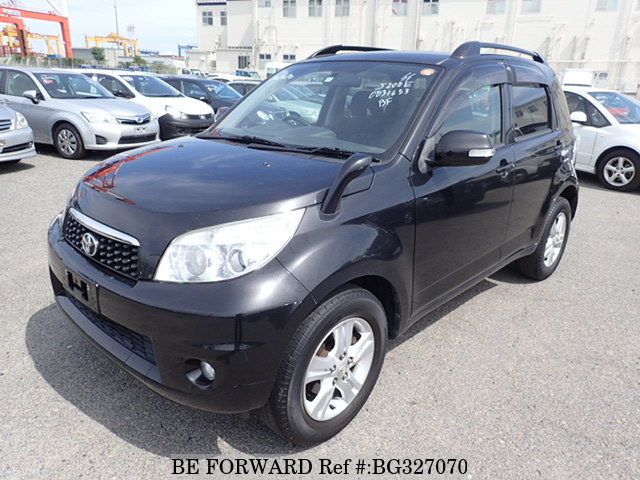 The 2010 Rush introduces some great convenience features, such as keyless entry, along with great safety design that includes an engine immobilizer, made to prevent theft. Other features to expect with the 2010 Rush may include a sound system with CD player and TV display with DVD-playback capability. Power equipment includes steering, window and locks.

Additional safety features include anti-lock brakes, as well as airbags. Many 2010 Toyota Rush models offered at BE FORWARD include a back tire. The Toyota Rush comes strong with a 1.5L engine that provides great fuel economy ranging from 14.8km/L to 15.4km/L, and comes in a 4-speed automatic or 5-speed manual transmission with rear-wheel or 4WD capability.

Is the Toyota Rush the Best Compact SUV on the Market?

The compact SUV market is a crowded one indeed, but the Toyota Rush holds its position well as a great option. How does it fare against its most similar competitor, the Suzuki Vitara/Escudo? Find out in our comparison here.