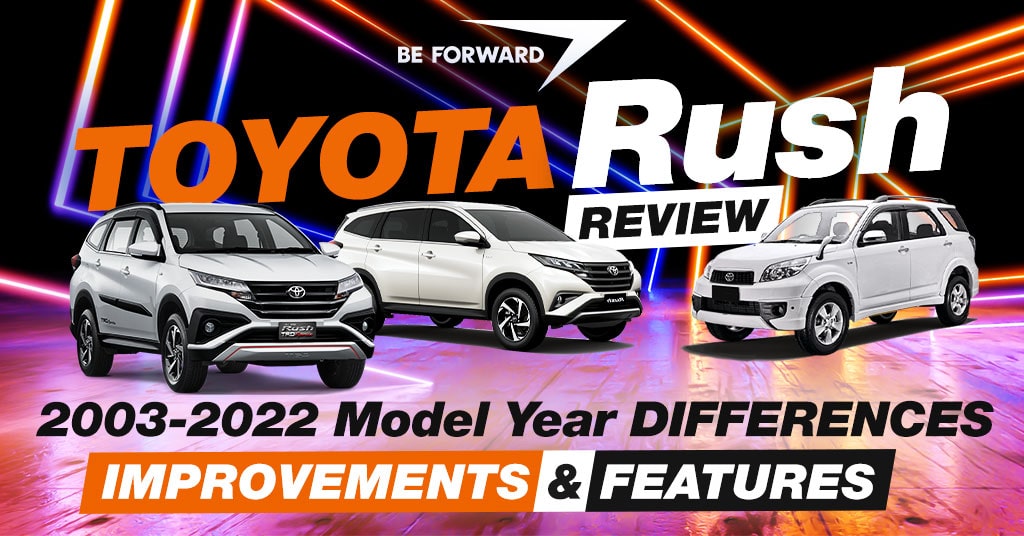 The Toyota Rush has a long history that stretches back to the Daihatsu Terios. In 1997 Daihatsu Terios was first released by the Japanese car manufacturer Daihatsu as a mini SUV. The 1st generation Terios model was the smaller model (Kei car) called Terios Kid available as a 5-door mini SUV, which was only released in Japan.

The Daihatsu Terios produced by the Japanese automobile manufacturer Daihatsu since 1997 as the replacement for the F300 series Rocky. It was initially offered in both long and short-wheelbase outlines before the former stopped production in 2016 to be replaced by the A200 series Rocky crossover in 2019.

The 1st generation Terios was available as a 5-door wagon, and a smaller Kei car model called the Terios Kid was initially previewed as the MS-X97 which was only released in Japan. The Terios Kid was introduced in October 1998 and continued to be produced 6 years after the original Terios had been replaced.

The 1st generation came with standard features including airbags, power windows, AC, etc. The Terios received a mild facelift both in the exterior and interior of the vehicle in 2000. The plastic black grille was replaced by a new chrome grille. The upper trim model had an addition of central locking, electric front windows, alloy wheels, roof rails, a roof-mounted rear spoiler, and rear-seat head restraints. Mechanically, the SOHC 1.3L 4-cylinder engine fitted to the earlier model had been replaced by the new DOHC 1.3L 4-cylinder engine. Power was also increased by 4hp. The 2nd generation of Terios is co-developed by Daihatsu and Toyota.

In September 2005 at the Frankfurt Motor Show, the 2nd generation model called D-Compact 4×4 (concept model) made an appearance, and in November 2005 at the 39th Tokyo Motor Show before being named Terios, which went into production in January 2006. The model codes are J200, J210, and J211 for the short wheelbase configuration with five seats; F700 and F710 for the long-wheelbase outline that was built to accommodate the seven-seater outline.

Daihatsu designs and manufactures the Terios and also supplies the vehicle to Toyota as the Toyota Rush under a consigned manufacturing agreement. According to Toyota, the name “Rush” is inspired by a “sense of energetic vitality and cheerfulness”.

The 2nd generation uses either a 1.3L or 1.5L engine. Only the 1.5L model is available with both 2- and 4-wheel drive. These engines are attached to a 5-speed manual or 4-speed automatic.

The Indonesian-market Terios received improvements such as body-colored side body moldings as standard on all variants and trim levels on 1 October 2008, as well as side visors, parking sensors, and single airbags on the driver’s side, followed by the Rush in August 2009.

The 2nd generation Terios is available as the Toyota Rush (2008 to 2017) in Malaysia, and (2008 to 2009) Perodua Nautica. In January 2008 the Rush was introduced as a long-wheelbase model. It offers 3-row seating as standard. In April 2008 the Nautica was introduced as a rebadged model of the short-wheelbase Terios/Rush available with standard 4WD, it was imported from Japan as the replacement for the Perodua Kembara.

The Terios and Rush received its 2nd facelift on 20 March 2015. The 2nd facelift model brought a wider grille with a chrome lower bar, new projector headlamps with LED positioning lamps, a blacked-out centerpiece, and a full-width air intake for the lower bumper. For the interior, both Terios and Rush shared the same steering wheel as the F650 series Xenia/Avanza, a redesigned instrument cluster, reshaped second-row headrests, double DIN touchscreen DVD head units on higher trim levels, and updated seat upholstery.

In January 2008 the 1st generation Rush was launched in Malaysia. It is available in 2 trim levels: 1.5S (with automatic transmission only) and 1.5G (with either manual or automatic transmission). In Malaysia, the Rush is sold as a long-wheelbase in a 7-seat configuration. The Rush received its 1st facelift for 2011 in December 2010.

The Rush received its 2nd facelift in April 2015 with the same model in the Indonesian market. Exterior changes included a radiator grille, bonnet, and redesigned front bumper. The grille is finished with faux carbon fiber and the bumper is finished in a 2-tone effect. Elsewhere, there are restyled tail lamps with combination LEDs and smoked lenses and a new integrated chrome lining highlight running across the headlamp and radiator grille. The 1.5S has additional equipment including the leather steering wheel and gear knob, fog lamps, and chrome covers for the wing mirrors.

The Toyota Rush spurt onto the scene, offering a much-needed change of pace from the norm that is typically seen in the compact SUV market with its long wheelbase and accompanying “cheerful” aesthetic. One of the biggest points of appeal with the Toyota Rush, by far, is its amazing fuel economy. The fuel consumption rate for this generation Rush ranges between 14km/L to 15.2km/L, an impressive rate for an SUV in any class.

On 23 November 2017, the 3rd generation Terios was unveiled in Indonesia, along with the 2nd generation Rush. In 2015 the chief engineer Eiji Fujibayashi led the development of the car, with its design influenced by the FT Concept.

Compared to its forerunners, the design of this current model is more streamlined, akin to crossovers. This model no longer has the spare tire mounted on the rear door and has a rear liftgate rather than a side-opening rear door.

The TRD Sportivo trim of the Rush was renamed to GR Sport and received redesigned front and rear bumper spoilers, redesigned side body molding with the GR logo, and the “GR Sport” emblem on the tailgate on 9 August 2021, The Rush was also upgraded with automatic idling stop system for both GR and G Sport trims. The GR Sport trim also received an updated touchscreen head unit without the CD slot and auto-retractable mirror.

On 18 October 2018, the Rush was introduced in Malaysia. There is only a 7-seat model. It is only available with a 4-speed automatic transmission and 2 trim levels are available: 1.5 S and 1.5 G. The 1.5 S trim is equipped with a pre-collision system. A new Red Metallic color option was made available, replacing the Dark Green Metallic color in April 2021.

The 3rd generation is powered by a 1.5L 2NR-VE I4 petrol engine supported by a 5-speed manual or 4-speed automatic.

The Toyota Rush 2022 is a member of the 3rd generation family unveiled in 2017. It has an ample interior and an imposing exterior and boasts a light steering feel. It is available in 2 trims which are GL and STD, both come fitted with a 1.5L engine and RWD drivetrain.

The Toyota Rush 2022 is equipped with technology and infotainment features including Apple CarPlay, front and rear USB ports, an 8-speaker sound system, and a 7-inch digital touchscreen.

The Toyota Rush 2022 come fitted with a 1.5L 4-cylinder engine producing a maximum power output of 103hp and 136Nm of torque, mated to a 4-speed automatic transmission and RWD drivetrain. It accelerates from 0 to 100km/h time in 13.0sec and has a top speed of 175km/h.

Toyota Rush is not a bad choice to have. The vehicles offer upscale interior trimmings, handling, spacious seating space packed with active safety features, and a comfortable ride. The Rush rates higher for performs better off-road and reliability with better fuel efficiency in both grades. On the other hand, when driving the Rush feels a bit faster. Visit BE FORWARD for a wider choice of the Toyota Rush.