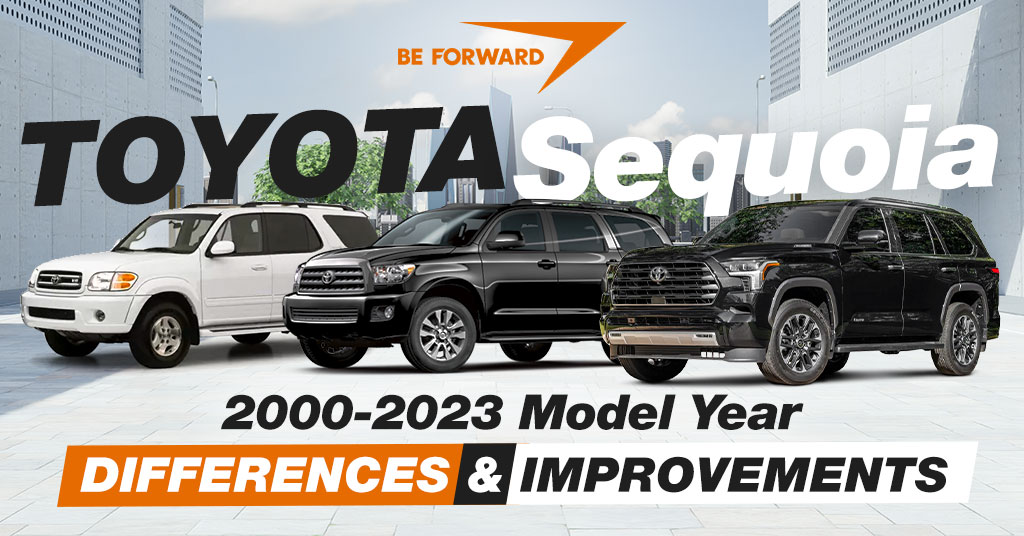 The Toyota Sequoia is a full-size SUV manufactured by the American subsidiary of the Japanese automotive manufacturer Toyota. The Sequoia was unveiled in 2000 as a 2001 model and was based on the Tundra pickup truck and was mainly aimed at the North American market.

There are three generations of the Sequoia which this article will briefly try to capture just to find out how this car has evolved since its introduction to inform you our reader. Please follow through.

The first generation Toyota Tundra was released in the year 2000 as a 2001 model. This model was based on a similar frame as the Tundra.

From the front, the Sequoia was fitted with a truck-like grille boosted by a chromed slat with a Toyota badge at the center and a V-8 badge just beneath it. Its steep windshield borrowed from the Tundra is met at the top by an extensive roof fitted with full-size roof rails. On the sides, the car features a set of body-colored plastic molding wheel arches and side steps. At the rear, the raked-forward C-pillars are met with a dark glass panel followed by dark D-pillars that create an impression of a glass back with a floating roof.

The Sequoia has a large and spacious cabin, that can accommodate up to 8 passengers in three rows. The dash, instrument cluster, and steering wheel are pretty basic, they are similar to the Tundra’s, but the rest of the interior is comfortable and luxurious enough to distance the car from its pickup roots.

The car has eight seats arranged in a 2+3+3 configuration with all passengers provided with enough head, shoulder, leg, foot, and knee room. It’s available in two trims which are the SR5 and Limited. The higher Limited trim comes fitted with standard features which include leather seats, heated seats, ten-speaker JBL sound system, a ceiling-mounted screen for the rear passengers, dual air conditioning, retractable exterior power mirrors, privacy glass, side airbags, power sunroof, a roof rack, a tow hitch, and aluminum wheels, and VSC as an option.

The second generation of the Toyota Sequoia was unveiled in 2007 as a 2008 model. Like the previous model, this model was also based on the Tundra pickup truck of the time which was bigger than the previous resulting in a gigantic Sequoia.

The 2008 Sequoia is available in three trims: SR5, Limited, and Platinum. It borrowed most of its styling cues and exterior features from the Tundra which include the three-slat grille with a chrome border and a Toyota badge at the center, headlamps, side mirrors, and grab handles.

The interior of the 2008 Sequoia is so spacious and ergonomic. The Dash and instrument panel is so basic, similar to that of the Tundra truck with the addition of a DVD navigation system. The cabin is ergonomic with plenty of storage options which include 16 cupholders, a glove box, door pockets, and a deep central bin.

The Sequoia has spacious seating for seven or eight depending on the seat configuration, with third-row seats that can comfortably accommodate three adults. The second-row seats regardless of configuration (bench or the captain’s chairs) have a fore/aft adjustment mechanism, which allows you to specifically adjust the amount of legroom each of the two rear rows gets. The Limited and Platinum come with a 60/40 third-row seat with a power-fold and power recline features.

Luggage capacity with all three rows occupied stood at 538 liters. With the third-row seat folded, it stands at 1897 liters. And with both rear rows folded down, you get a maximum of 3426 liters.

The third-generation Sequoia was unveiled in January 2022, as a 2023 model. It is a completely new car that is built on a fresh body-on-frame GA-F platform that it shares with the Tundra and Lexus LX.
This car is available in SR5, Limited, Platinum, TRD Pro, and Capstone trims.

The 2023 Sequoia has a muscular exterior. At the front, it features a massive omega-shaped grille and LED headlights and DRLs that are wrapped into the big blocky fenders that stretch outwardly. On the sides, the Sequoia boasts a straight line that emerges from the hood to the D-pillar at the rear.

Inside, the Sequoia is still an eight-seater as standard with three rows in a 2-3-3 arrangement, while a seven-seat in a 2-2-3 seat arrangement with captain seats on the second row is an option. The dash is similar to that of the Tundra, it includes a 14-inch touchscreen that dominates the upper side of the center console with the latest Toyota infotainment system with Apple CarPlay, Android Auto as standard, and options such as Wi-Fi hotspot and more. The climate control buttons are placed below the display mimicking piano keys creating a nice premium detail. Other features include a center stack with useful cubbies, big boxy air vents, cupholders, a huge bin between the front seats enough to store large items, and more.

Under the hood, this 2023 Sequoia comes fitted with an iForce Max twin-turbo 3.4-liter V6 petrol engine and an electric motor hybrid with a total output of 437 hp and 583 lb-ft of torque. This engine is paired with a 10-speed automatic transmission with rear-wheel drive as standard drivetrain and four-wheel drive optional.

The previous i-Force 5.7-liter V8 engine has been discontinued.

The Toyota Sequoia is a full-size pickup truck that has won hearts and built a reputation for being reliable, durable, and dependable. Its bulky nature, cargo capacity, offroading capability, towing capacity, and eight-seat capacity make it a great car for those family adventures.

If you are looking for a good full-size SUV please visit BE FORWARD and check out our list of 160+ used Toyota Sequoia.