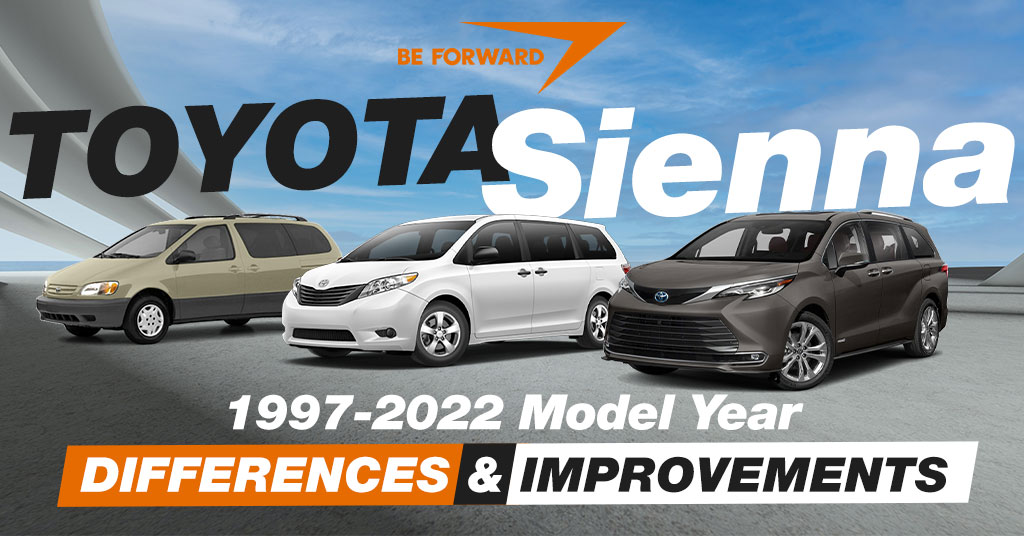 The Toyota Sienna is a minivan manufactured by the Japanese automotive company Toyota for the North American and a few East Asian markets.

The Sienna is named after a city in the Tuscany region of Italia called Siena. The Sienna was introduced in 1997 to replace the first-generation Toyota Previa van.

In this article, we will take a brief historical view of the Toyota Sienna with a primary focus on learning more about the car. Please follow through.

Toyota launched the first generation of the Sienna in 1997 for the 1998 model year. The Sienna was built on an extended but similar platform to the Camry, and this led to it being marketed as the “Camry of minivans,” which enabled it to capitalize on the popularity of the Toyota Camry.

The LE and XLE trims feature a roof rack and a rear sliding door on the driver’s side as standard, but optional on the CE trim.

The base model CE came fitted with a 2nd-row two-passenger bench seat while the LE and XLE models were equipped with 2nd-row captain’s chairs.

In 2001, the Sienna received some cosmetic changes that include a redesigned grille, a redesigned bumper, and front and rear facelifts. The rear driver’s side sliding door became standard across all trims.

The Sienna received a good safety rating from the IIHS with some of its optional safety features including side airbags, anti-lock braking system, and VSC.

The Sienna came fitted with a 3.0-liter V6 engine with 194 hp and 209 lb·ft of torque. This engine was paired with a 4-speed automatic transmission.

In 2003 Toyota unveiled the second generation of the Sienna as a 2004 model. It was still based on Toyota’s K platform that it shares with the Camry.

This model like the previous was still available in three trims which are the base CE, mid-level LE, and higher XLE.

The base CE trim was defined on the exterior by a horizontal black bar over the rear license plate, while on the LE it’s of the same color as its body, and on the XLE it’s in chrome.

Compared to the previous model, the 2004 Sienna volume has grown by 45% and cargo space by 39%. The rear seats fold in a 60/40 split configuration, with the third-row seat folding flat to create enough space to accommodate a 1.2 by 2.4 meter (4 by 8 ft) building materials like gypsum boards and plywood.

Toyota unveiled the third-generation Sienna in 2010 as a 2011 model. This model was completely redesigned and was available in five trims which are: Base, LE, XLE, Limited, and the SE trim.

Exterior changes on this redesigned 2011 Sienna include a tall front fascia that assimilates Toyota’s design language, short overhangs, a wide and tall windscreen, swept-back headlights, a short hood, and a slatted grille. On the sides, the Sienna comes fitted with rear wide opening power-sliding doors that provide easy entry and exit.

Inside, Toyota created a dashboard design with a “swoop” wood trim and a “60/60” split weather control at the front that frees the driver from cabin temperature adjustment duties. Other new features include a rear-seat entertainment system with a 16.4-inch LCD screen with two viewing modes, either a single view 16:9-ratio or a split view in a 4:3-ratio with separate wireless headphones. The Sienna is a true seven-seater with an optional sliding second row with recliner style (Lounge Seating) chairs.

Several upgrades were undertaken between 2012 and 2019 which included the addition of Toyota’s Entune infotainment system, new taillights, interior design and colors, new grille, and new technologies.

The 2011 Sienna came fitted with a 2.7-liter 4-cylinder petrol engine with 187 hp and 186 lb-ft of torque as standard or the 3.5-liter V6 engine used in the previous model as an option. These engines were paired with a 6-speed automatic transmission with an 8-speed automatic transmission introduced in 2017. The Sienna is available as an AWD or FWD.

Toyota unveiled the fourth generation of the Sienna in 2020 as a 2021 model. This model was based on Toyota’s TNGA-K platform and is available in the previous LE, XLE, and Limited trims, with another two, the sport-oriented XSE and the highest platinum trim.

The exterior of the 2021 Sienna is made up of a protuberant grille that almost covers the apron and long slim headlights with daytime running lights at the front. The greenhouse is made up of a slightly sloped roof with two thick, D-pillars at the rear. On the sides, it features sculptured door panels and fenders at the rear that makes the car more appealing. At the rear, it’s fitted with a Corolla wagon inspired tailgate.

The interior of the Sienna is spacious and has a three-row seating arrangement. The roof is mounted with the rear infotainment system. The cargo area is large enough to accommodate family luggage and can be extended by folding the third row when not in use.

Standard interior features include Wi-Fi, a rear entertainment system, 7 USB ports (one with data connectivity), a four-zone climate control system, and a voice amplification system that enables the driver and front-seat passenger to better communicate with passengers on the rear seats. The Platinum trim adds a 360-degree camera view and a heads-up display.

The 2021 Sienna came fitted with a hybrid system with a 2.5-liter Atkinson engine and an electric motor that produces a combined 245 hp and 184 lb-ft of torque. This engine was paired with an eCVT transmission with front-wheel drive as standard and all-wheel-drive optional.

In 2021, for the 2022 model year, Toyota released a crossover variant of the Sienna referred to as the Woodland. The Woodland was based on the XLE trim, and it came in AWD as standard and had a higher ground clearance and a tow package which made it a great car for outdoor-oriented activities.

The Toyota Sienna is a minivan produced by Toyota and primarily built for the North American market. It was built on a revised Camry platform and has been so throughout its cabin is upscale and spacious with seating of up to eight passengers depending on seat configuration. It has most of the things families look for in their daily transportation needs, and we hence conclude that the Sienna is a good minivan overall. It’s also a comfortable, agile, dependable, and reliable car.

We hope this read will impart you with the necessary information regarding the Toyota Sienna, and if it happens you look forward to buying, it will lead you to make an informed decision.

Please visit BE FORWARD and check out our list of 90+ used Toyota Sienna’s on sale.