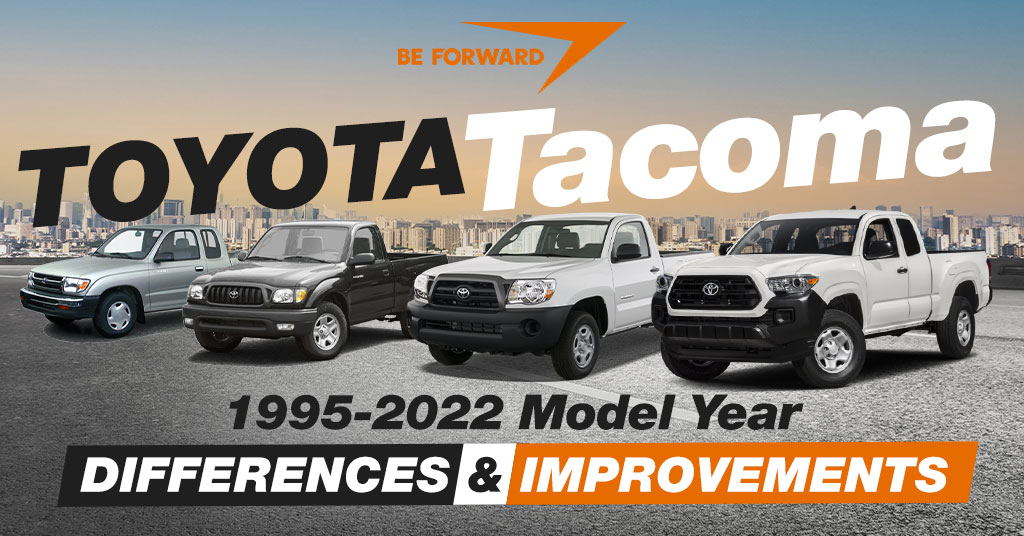 The Toyota Tacoma is a pickup truck manufactured by Toyota Motors Manufacturing in the United States, a subsidiary of Toyota Japan. The Tacoma was introduced in 1995 and is still in production, currently on its third generation from 2015.

The Toyota Tacoma has gradually transformed since its introduction in 1995. It has grown from a compact pickup to a mid-size pickup, while at the same time becoming more sophisticated and more powerful as time went by. What you should expect from current Tacoma’s is a powerful and stylish truck that has undergone two decades of refinement and improvements.

The Tacoma is built to serve as an occasional/regular work truck, but also as a daily use car.

Here we take a brief look at the history of the Toyota Tacoma. Please follow through.

The first generation Tacoma was unveiled in March 1995 as a sixth-generation replacement for the highly regarded Toyota pickup (Hilux). The Tacoma was produced with great emphasis placed on comfort, handling, ride quality, and safety, pushing refinement and quality to new heights.

The exterior of the Tacoma features daring lines that make the truck look pretty nice. Some of the new exterior features include a single-piece flush-mounted windscreen framing that reduces wind noise and provides a smooth and sleek look, while on the sides there are new 37 degrees door-handle operating angles in place of the previous 60 degrees for ease of use plus new large side mirrors. At the rear, a stoplight is placed at the top of the roofline.

This Tacoma model is available in regular and extended-cab versions. The regular cab can be configured with either a standard three-seat bench or an optional two-seat bucket seat The extended cab can comfortably accommodate four occupants, or five, with three squeezing onto the rear bench.

This Tacoma was offered with three optional engines which are the 2.4-liter and the 2.7-liter inline-4 petrol engines with 142 hp and 160 lb-ft of torque and 150 hp and 177 lb-ft of torque respectively, while the third engine is the 3.4-liter V6 petrol with 190 hp and 220 lb-ft of torque. These engines are paired with either a 5-speed manual or 4-speed automatic transmission and a 2WD or 4WD drivetrain.

The second-generation Tacoma was unveiled in 2004. This new Tacoma grew to a mid-size truck, and included plenty of options, such as three cabs (regular, access cab, and double cab), two bed lengths (5 foot or 6 foot), two engines, and four transmissions.

In 2009 the Tacoma got revised with some notable cosmetic changes which include a revised grille, smoked headlights, and new LED taillights. Another revision followed in 2012 which introduced a new front bumper, grille, headlights, shark fin antenna, and hood. The interior was touched too with the addition of some features such as satellite radio.

The new Tacoma came with either a 5- or 6-foot bed with features such as tie-down cleats, a deck rail system, hook pins, storage boxes, and a power outlet in the bed of the off-road package.

The interior of the Tacoma resembled that of the 4Runner, with better material quality. The comfortable and supportive seats were unheard of for a vehicle in this class.

The X-runner trim level was also introduced with this second generation. It was fitted with a 4.0-liter engine paired with a 6-speed manual transmission, an upgraded suspension package, and 18-inch alloy wheels. Other features were hill-start assist control, downhill assist control, optional rear-locking differential, and an optional off-roading package.

In 2015 the third generation was unveiled. This model will only be available in the Access and Double Cab body styles with long or short beds, with the Regular cab discontinued from 2015.

Exterior changes include an aggressive front styling with a larger grille, new headlights, an infused spoiler, an air dam, a redesigned bed, sequential LED/DRL headlamps, black-insert taillamps, and 16-inch alloy wheels. Other changes include a body built from high-strength steel and reduced weight for better performance and improved fuel efficiency.

The TRD trim comes with a terrain-select mode.

The 2022 Toyota Tacoma Trail Edition has received some new aesthetic and mechanical tweaks, while its extremely capable TRD Pro sibling gets even better with unique suspension parts.

Introduced in 2020, the Trail Edition which is based on the budget SR5 trim level was a limited-production model that featured off-road and practical goodies, such as lockable bed boxes. For 2022, the Trail Edition comes with a locking rear differential as standard and the suspensions are lifted by 1.1 inches in front and 0.5 inches at the rear compared to other standard Tacomas to give the truck an off-roading edge. Another change is on the grille where it borrows the TRD Pro heritage grille and adds bronze lettering on it with the addition of bronze-colored wheels as well. The TRD Pro model also gets a slightly better suspension lift compared to the Trail Edition, where it is lifted by 1.5 inches in front and 0.5 inches at the rear just like the Trail Edition with some new wheel-and-tire setup.

The Tacoma is a truck known for its endurance, quality, performance, dependability, and reliability, and to add to that it is also known for having a very good resale value. This truck also comes packed with several active and passive safety features to protect its occupants.

Please visit BE FORWARD and check out our stock of 200+ used Toyota Tacomas on sale.