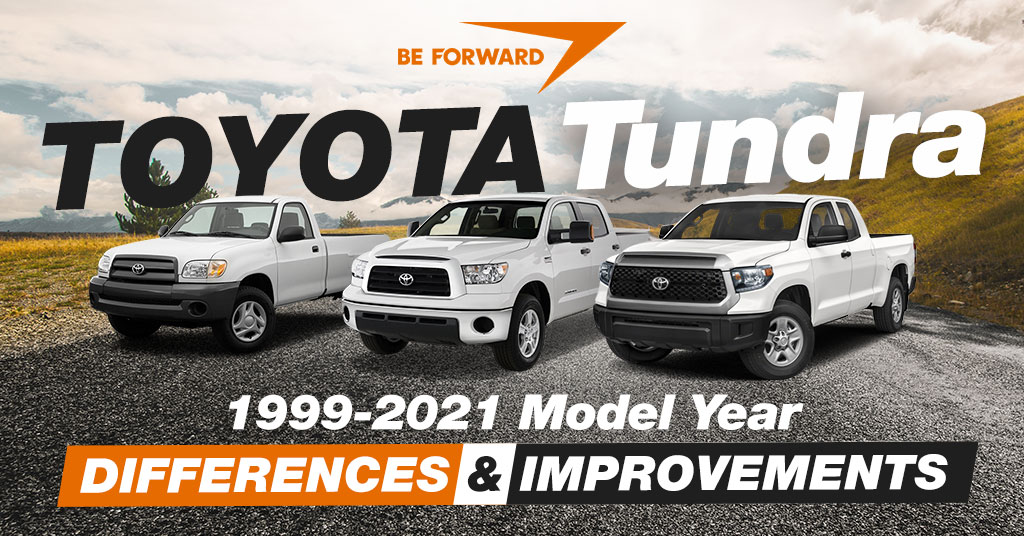 The Toyota Tundra is a full-size pickup truck manufactured by Toyota Motors Manufacturing in the United States which is a subsidiary of the Japanese automotive manufacturer Toyota. The Tundra was unveiled in May 1999 and is still in production, with its third and current generation model released in 2014.

The Toyota Tundra is a car that is known for its quality, performance, durability, dependability, and reliability, and to add to that the Tundra is also known for holding its value over time and that is why they have a very good resale value. This truck also comes fitted with plenty of safety features to protect its occupants.

The Tundra is built as an occasional or regular work truck, but it’s also comfortable enough to be used as a daily car. It’s adventurous but also good for off-roading with great capability.

Let’s take a brief look at the different iterations of the Tundra and what they have to offer. Please read on

Toyota was looking for ways of capturing a segment of the highly competitive and lucrative U.S. pickup market after trying and failing with the HiLux and T100. Eventually, Toyota asked their R&D department to develop a highly competitive car, and the team came up with the Toyota Tundra in 1999.

They began by redesigning the T100 chassis and making it sturdy and longer. Then, they built an Access Cab version with a pair of rear-hinged doors and two regular front doors. The front fascia was curvy and had a grille with chrome surroundings. The bumper was thin, providing an excellent approach angle.

The interior of the first-generation Tundra had limited space compared to other full-size American pickup models of the time, but front-seat passengers had enough space. For the rear seat, space was limited, tall occupants may struggle. Apart from the limited rear seating space, the Tundra cabin is very well built, with its front seats offering three seating configurations which are: a 40/60 split-fold bench with a larger storage bin/armrest and two extra cupholders, a bench seat with a fold-down center armrest, or captain seats with integrated armrests. Optional interior features include leather seats and a 6-disc in-dash CD changer.

Toyota unveiled the second generation (2007 model) of the Tundra pickup at the 2006 Chicago Auto Show and signified their determination to conquer the American pickup truck market that is dominated by American brands.

The 2007 Tundra was completely redesigned, giving birth to a true full-size truck. With a sturdy frame, three cab lengths, three bed lengths, three wheelbases, three engines, and two transmissions, the Tundra was now in a position to rub shoulders with traditional leaders in the full-size pickup segment.

The front fascia of the CrewMax is tall and flat, with a bulky three-slat grille surrounded in chrome. The CrewMax which was the largest of the three cabs offered had the roomiest interior of all full-size pickups at the time, although its bed was only a 5.5-feet. As big as the crew cab was, Toyota also made the door handles big too, enabling even a person with working gloves to be able to operate them. For models fitted with the optional side-steps, users will realize that they were made wide enough to accommodate even a size 45 (size 11) working boot.

The 4-door medium-size Double Cab, which comes with an extended cab is equally as large as what other competitors offered at the time, while its bed was 6.5-feet and the 2-door Regular-cab had an 8-feet bed which saw the Tundra offer a level of flexibility like never before.

Standard features on the 2007 Tundra include stability control and side curtain airbags, while a bed rail system, a backup camera, and extendable towing mirrors are optional.

The interior of the 2007 Tundra was designed to suit a family or a team of workers. The two front seats are wide and comfortable, while at the rear there is a spacious bench enough to accommodate three adults without rubbing shoulders. Toyota also designed the headrests in a way that they could hold hardhats.

In 2013 the Tundra received some major restyling to give it a much bolder and huskier look. It was not a complete overhaul as would’ve been expected, only several cosmetic changes with the suspension system and powertrain to a great extent remaining the same.

The 2013 Tundra like the previous release was still available in three body styles (Regular Cab, Double Cab, and Crew Max) and beds of differing dimensions.

Inside, the dashboard has been redesigned and the instrument cluster now features traditional gauge clusters that are good-looking and easy to read. The center console that houses the radio and climate knobs have been moved closer to the driver for ease of access. The Tundra now comes fitted with Toyota’s Entune infotainment system with smartphone connection services and USB port. The high-end models add aluminum and wood trimmings, perforated leather upholstery, and several other optional features.

The 2013 Tundra comes fitted with the same engines that were used on the 2007 – 2013 Tundra, with the 4.0-liter V6 engine tuned up a bit to gain an extra 34 hp to boost its output to 270 hp. Another upgrade is on the suspension system which was slightly upgraded to make the ride smoother.

In 2014, the Toyota Racing Development team worked on the Tundra Crew Cab which resulted in the release of the Tundra TRD Pro Series special edition that featured a redesigned grille and badge, a new orange shade, a specially tuned raised suspension, TRD rims, and exhaust, skid plate, off-road tires, and other extra accessories.

The Toyota Tundra has come a long way from its introduction in 1999 to the present. It has come from an outsider on the full-size pickup truck to becoming a significant player in this market segment. All this did not just happen, it was rightly gained by the Tundra’s reliability, quality, durability, capability, and ruggedness.

The Tundra has a very good resale value, as they are highly sought after. We at BE FORWARD have a list of 300+ used Toyota Tundra for sale. Please visit our site and check out which one will suit you best.