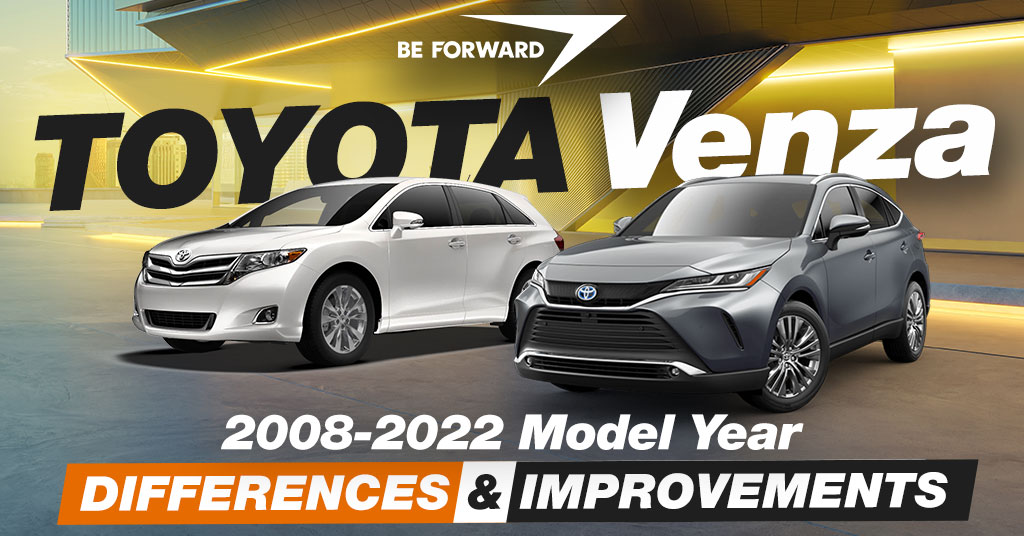 The Toyota Venza is a crossover SUV manufactured by the Japanese automotive company Toyota. The Venza was introduced in 2008 as a 2009 model and was primarily meant for the North American market.

The Venza is currently on its second generation from 2020, with the changes from the first generation to the second so significant.

Here we will embark on analyzing the Venza from when it was released to the present in the process of briefly understanding how far the car has evolved over the years. Please read on.

The first-generation of the Toyota Venza was unveiled in 2008 for the 2009 model year. The Venza was based on a combination of the K platform of XV40 Camry series and Toyota Highlander.

The exterior design of the 2009 Venza was not very stylish, it prioritized comfort over looks. It came fitted with fog lights, a power liftgate, and 19-inch (20-inch) wheels which were odd for a crossover as standard.

The Venza is a five-seat car with a comfortable, well insulated, and spacious cabin. It features a high entry and exit point that made ingress and egress easier even for the old. Its raised roof creates a better head and an immense cargo area, and its rear folding seats provide an option for expanding the cargo bay.

The 2010 model came with an updated audio system with a single-CD player unit with USB and Bluetooth connection as standard in place of the previous standard 6-disc CD changer.

In 2012, for the 2013 model year, Toyota gave the Venza a mid-cycle facelift. The changes were not much significant only slight changes in its facial looks. Unlike the 2009 model which had a single trim with various optional packages, the 2013 model was available in LE, XLE, and Limited trim levels.

Its front fascia still resembled the Camry while the greenhouse was borrowed from the Lexus RX. It featured short overhangs, a forward-raked A-pillar, and a low roofline. Its rear raked-forward tailgate was a fusion of a regular and a fastback tailgate.

Inside, the 2013 model came with a two-tone dashboard, a center stack that extends to the center console, and a shift stick mounted on the driver’s side. Its instrument cluster consists of a big round speedometer at the center flanked to its left by a tachometer and the fuel and temperature gauges to its right. The cabin is spacious, fitted with comfortable and supportive seats, with passengers accorded with plenty of head, leg, knee, and foot room. The 60/40 split-folding rear bench extends the cargo area from 1.025 liters to 1,988 liters.

Standard infotainment has improved with an upgraded display and better connectivity for base LE models, while the higher XLE and Limited models get Toyota’s Entune system that provides access to mobile apps via a smartphone tethered connection and an upgraded navigation system.

The engines remain the same.

The second-generation Venza was unveiled in 2020 as a 2021 model. Unlike the first generation model which was based on the Camry, this model was a rebadged version of the Japanese-based Toyota Harrier XU80. Unlike its Japanese twin, the Venza was only available in an all-wheel-drive hybrid configuration.

Like the previous model, this model is also offered in LE, XLE, and Limited trims.

Exterior features of the Venza include a face that features slim LED headlights with automatic high beams placed above the wide strakes close to the wheels, a lower front bumper that opens up towards the wheels and corners to give the car a wider stance, and an expansive grille integrated at the center of the bumper. At the rear, you find LED taillights and a hands-free liftgate.  The greenhouse features a sloped roof and raised shoulders over the rear quarter panels, which made the car look dynamic.

The seats are nice, comfortable, and supportive, and come covered with cloth upholstery as standard, with enough leg and headroom for both rear and front-seat occupants, and a large cargo area. Other features on the minimally-designed dashboard are two cup-holders and a gear selector at the bottom of the center console.

Under the hood, the Venza came fitted with a 2.5-liter Atkinson cycle petrol engine paired to an electric motor and hybrid batteries that altogether produce 219 hp. This engine is paired with an eCVT transmission. All-wheel-drive is standard.

For the 2022 model, Toyota did not change anything on Venza.

The two generations of the Venza have offered two totally different cars, but both being very outstanding and useful cars in many ways. Toyota is known for its reputation of building reliable, dependable, durable, and ergonomic cars, the Venza is living proof for this. If you are looking for a wagon-like car, then the first generation Venza is the car for you, or else if you are looking for a midsize SUV then the second generation Venza is a great option.

At BE FORWARD we have stocked used Toyota Venza’s for sale. We will be glad to do business with you.