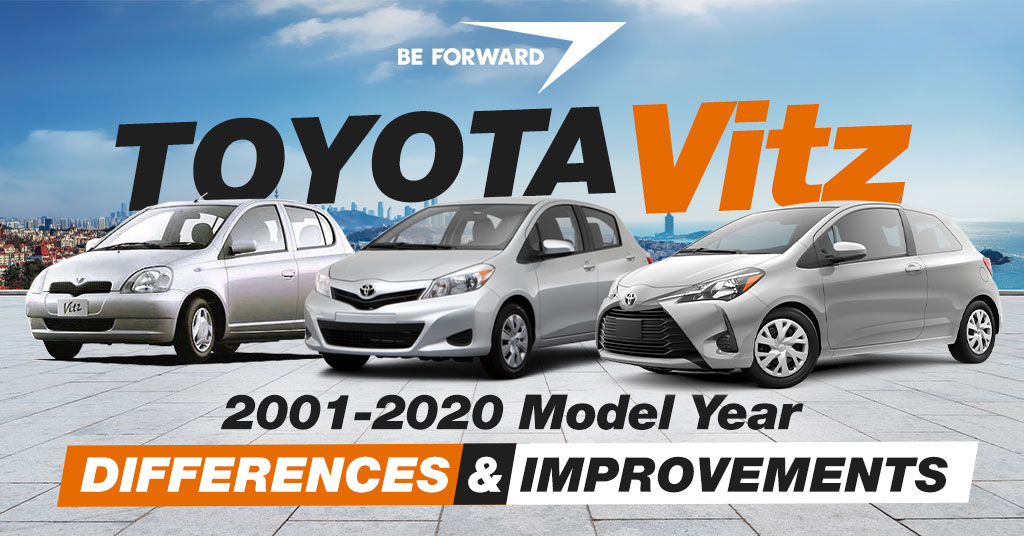 Toyota Vitz is a 3- or 5-door subcompact hatchback manufactured by the Japanese automotive manufacturer Toyota from 1998.  Toyota has sold over 3.5 million units all over the world since its introduction in 1998. Toyota Vitz which is also known as the Toyota Yaris in different countries was awarded “Car of the Year 1999-2000” in Japan. Its popularity can be attributed to its dependability, exceptional fuel economy, and versatile hatchback design. If you want to possess a low-cost car, the Vitz is the car for you.

But which generation will suit you best? Keep reading to find out.

The production of the Toyota Vitz started in 1998 and was marketed using different names in different markets such as Toyota Yaris (Europe), Toyota Echo (Oceania, North America, and the Philippines) and Xiali Vizi (China) marketed globally across 3 generations.

The first generation production began in late 1998 to 2004 and is known as XP10. The Vitz and Platz were designed using the same platform, they are identical in many ways and both share a common dashboard module.

The design of the 2005-2010 Toyota Vitz has a number of features that improve on its earlier models, including larger indoor space and luggage room, special bumper and grill, and interior features such as privacy glass, audio and CD player space, and triple design air conditioning switches.

The earlier 1.0L VVT-I 4-cylinder engine was replaced by the 3-cylinder engine. The 1.3L engine was revised to offer slightly more power, and the 1.4L D-4D generates a maximum power output of 15 hp (11 kW; 15 PS) boost to 89 hp (66 kW; 90 PS), the previous engine allowing it to achieve exceptional fuel economy. The Yaris added a 1.33L engine with Stop & Start technology for the European market in early 2009. The Yaris became the 1st car in its class to offer nine airbags.

The 2009 Vitz received a minor facelift with slight subtle revisions to its bumper with in-built cornering protectors, orange-tinted signal taillights, and air dams.

The 2nd generation interior is roomy and features include a rear folding bench for superb cargo space availability and front bucket seats for a comfortable drive. Other added features that may be found with the 2nd generation Toyota Vitz, depending on its trim level, include revamped front and back bumpers and front grille as well as a thermal controlled driver’s seat which can be set to cool or warm, making it ideal for comfortable driving through all seasons. The center instrument panel is also bright and easy to read at a glance.

In terms of features, the 2008 Toyota Vitz offers a variety of functional and convenient features across its range of trims and model levels. Said features include tinted glass for added privacy, remote unlocking, smart entry and start, dedicated LED rear combination lamps, and the inclusion of the TOYOTA INTELLIGENT IDLING STOP SYSTEM which stops the engine when idle to save power and increase fuel efficiency.

The 2009 Toyota Vitz has received an aesthetic upgrade to the interior, featuring plating decorations on the inside door handles and side registers to give off a sense of quality. Other features include an audio CD system and privacy glass for a comfortable, entertaining ride. The Toyota Vitz has always been a hallmark of quality, but the 2009 model took a major leap forward, featuring improved fuel economy over previous years thanks to cutting edge technology by Toyota to optimize the Vitz fuel consumption rate. Make the 2009 Vitz the next model you choose.

The third generation started its production from 2010 to 2019 with typical exterior features including a rear window defroster for keeping your vision from being obstructed, and power side mirrors so that you can adjust your vision safely and easily. The interior features include a rear folding bench seat for extra cargo room and cloth seats for a stylish yet comfortable drive.

The 3rd generation sold in many markets as the Yaris. The 3rd generation is roomy 5-door hatchback 3rd generation variations tend to offer a 36L to 42L petrol or diesel engine with an excellent fuel economy of around 3.5L to 5.3L per 100km, better than what you might expect for a subcompact.

The 2015 Toyota Vitz comes in F, U, RS, and Jewela model grades. The engines fitted in the range from 1.0L – to 1.5L. The RS model is fitted with a 1.5L and linked to a CVT transmission for the automatic, sporty tail lamps and front fascia. The 2015 Toyota Vitz is available in 2WD and 4WD drivetrains just like the previous generation. The new RS model G’s sport trim has tuned suspensions, lightweight 17-inch aluminum wheels, high-performance tires, and a new aero body kit. The 2015 Toyota Vitz offered in both 3- and 5-door hatchback styles, the Yaris Liftback offered only the previous generation’s 1.5L engine with a 5-speed manual or optional 4-speed automatic transmission. On average, the Toyota Vitz 2015 fuel consumption is 18 KM/L mileage with a fuel tank capacity of 42 liters which is very sufficient for a long road journey.

Finally, the 2010-2019 Toyota Vitz increases the vehicle’s fuel efficiency even further and employs a new platform that reduces the vehicle’s weight. It also incorporates a new 1.2L I4 engine, leading to an astounding fuel consumption rate that reaches between 18 Km/L and 23 Km/L, so you can look forward to saving money with fewer trips to the fuel pump.

Modern Toyota Vitz is more sporty and stylish than its predecessors. However, despite their appeal, the total number of excellent options can feel awesome. The key to making the right model year choice you must know what features will be the best fit for your drive and lifestyle. Please take your time in browsing the Toyota Vitz on our site BE FORWARD.