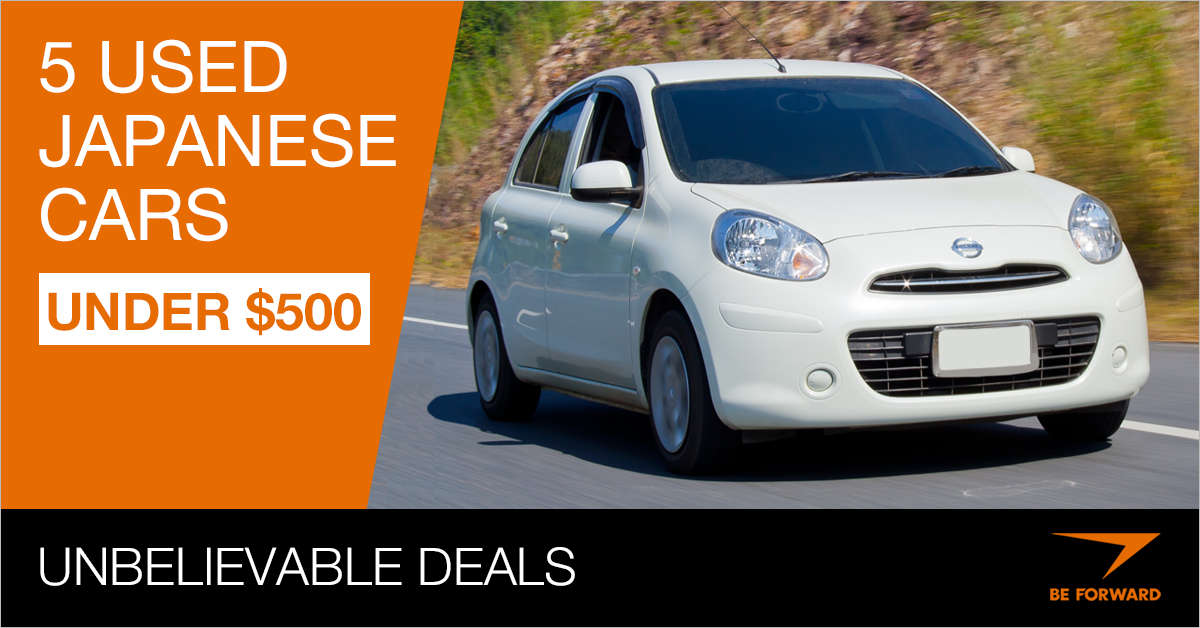 Japanese car makers such as Toyota, Nissan, and Honda are driven by the belief that everyone should be able to drive quality cars, no matter what their budget may be. Thanks to this philosophy a large range of affordable used cars are available today that often reach too-good-to-be-true prices. The good news? They really are true! Here, we take a look at 5 examples of amazing used cars you can buy for under $500 on BE FORWARD.

Before we get started, here’s a quick preview of the cars we will be featuring in this post, along with the amazing deals you can expect from BE FORWARD.

The Toyota Passo is a compact 4-door, 5-seater hatchback that comes in a number of different trims and engine sizes across its model range, with the latest model having an engine displacement of around 1,300cc. The first generation Passo was produced between 2004 to 2010, the second generation from 2010 to 2016, and third generation from 2016.

Browse Toyota Passo Cars For Under $500

This nimble and nifty car comes with impressive features including an impressive amount of legroom, cup holders, an AM/FM radio and CD player, defogger, and strong air conditioner. The gear shift is on the dashboard to leave more leg space. This car comes in 4-speed automatic transmission.

On the exterior, the Passo is instantly recognizable by its boxy-looking rear and a smaller rectangular-shaped front grill. Its engine size generally comes in two options – 1.0 liter or 1.3 liter, both with a 4-cylinder EFI engine. The fuel economy of the Toyota Passo is roughly 28 km per liter on average, thanks to its smaller stature.

The Toyota Isis is a 7-seater, 5-door multipurpose van that has been widely used in many countries outside Japan. In places like Africa, it is often compared to cars such as the Mazda Premacy and Toyota Wish. While the Wish is a bit smaller at its rear, however, the Isis offers a larger amount of space.

The exterior of the Isis is very pleasant in comparison to many other MPVs. It has a slightly boxy look, but its low profile also means a lower center of gravity. Depending on the model, its wheels can be steel or alloy, and it offers a bold front grill with drawn-back headlights. The rear doors open by sliding, with the left side being automatic and the right side manual.

The engine is a 4-cylinder 1,998cc multipoint fuel injection system which runs on petrol. The fuel consumption of the Toyota Isis has been rated at around 12 km per liter when driving with a number of passengers.

One look at the Mazda Demio and you will agree that this is one aesthetically pleasing car. However, a sleek shape and good looks are not all there is to this popular supermini. Since its first generation was released to the market in 1996, this hatchback—transformed from its initial estate body style—simply gets better with time.

Search Used Mazda Demio for Under $500

This 5-seater, 5-door car packs quite a lot of space inside, despite its deceivingly compact exterior. It comes with standard features including cup holders, door pockets for storage, a 3-point safety belt, air bags for the front passengers, and much more.

The exterior of the Mazda Demio is quite impressive. This peppy car boasts striking looks, with a small grill that displays the Mazda logo prominently. A rear roof spoiler is included for some models that further enhances its looks, as do the optional alloy rims. Other exterior features include auto-leveling headlights, fog lights, and convenient keyless entry.

Under the hood, you can find an engine with a starting displacement of 1.3 liters to 1.6 liters, depending on the model that you buy, that runs on petrol fuel. The average fuel consumption of the Mazda Demio is roughly 23 km per liter if you opt for the 1.5-liter engine option.

Used Mazda Demio is available at BE FORWARD at prices ranging from about $250 to $5,400.

Also known as the Nissan Micra, the popular Nissan March has been in production since its first generation in 1982. No matter the generation, the March offers a lot of cabin space to seat most adults in comfort.

With front seats that are manually adjustable along with three-point safety belts, airbags, air conditioning, a lot of head space, and more, the March doesn’t lack in interior features and modern conveniences.

The exterior of the Nissan March is bright and cheerful, with steel rims and a youthful, rounded shape that appeals to many young buyers. Additionally, its headlights are well-pronounced and serve to give the car a slightly more aggressive look. Under the bonnet, you will find a 3-cylinder, 1.2-liter, DOHC engine that is capable of a 75HP output. The fuel consumption of the Nissan March is about 15 km per liter, with a fuel tank capacity of 41 liters.

Another deceivingly compact car, the Suzuki Swift first began production in 2000 and has grown to become a well-loved vehicle worldwide. As its name suggests, the Swift is indeed fast, reliable, and will take you from point A to point B in both speed and comfort.

Inside the Swift is a roomy interior, albeit having sacrificed some length and height for a wider frame. Power windows, conveniently-located cabin storage, manually adjustable driver and passenger seats, and SRS airbags are just some of the features to look forward to.

Regarding its exterior, the Swift generally comes as a 4-door hatchback, however a two-door sports version is also available. Its chassis is relatively low to the ground, and it also has a unique “smiling” grill that adds to its friendly appeal.

The engine is a 3-cylinder, 1.2-liter petrol Dualjet, that is capable of giving you an output of 92 HP, with the average Suzuki Swift fuel consumption coming in at roughly 27.9km per liter. You can find a Suzuki Swift on the BE FORWARD site from about $250 to $6,700.

Looking for even more unbelievably low-priced used Japanese cars? Click or tap the button below to browse BE FORWARD’s current selection of high-quality used cars under $500.