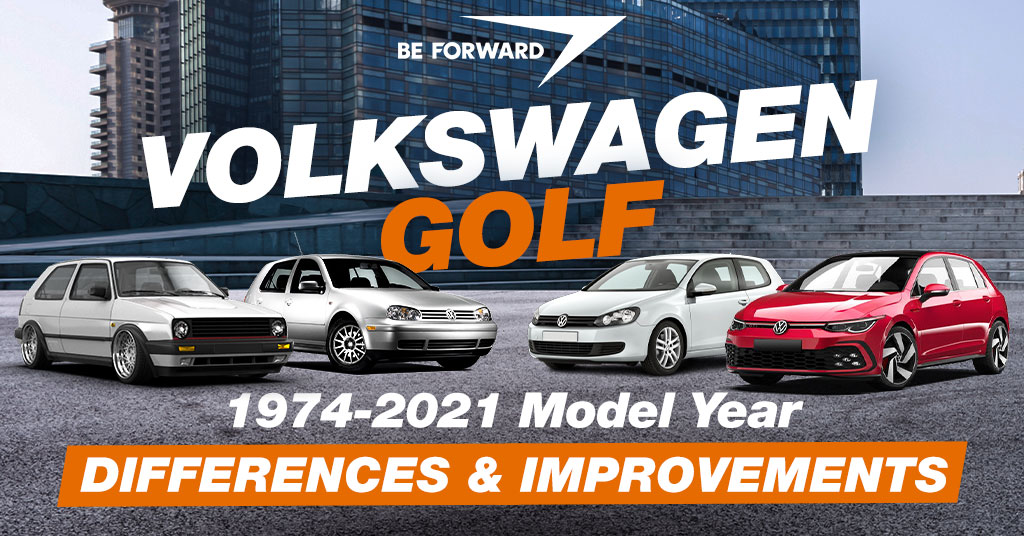 The Volkswagen Golf was unveiled in May 1974, as a replacement for the adored Beetle. The Golf marked the beginning of a new era trying to take over from where the Beetle left off. The Beetle had dominated the scene and had an almost cult following with its air-cooled rear-mounted engine and rear-wheel drive for several decades. The Golf unveiled the era of the front-mounted, water-cooled engine installed across the body and front-wheel drive. The Golf marked a new risky and radical direction for Volkswagen.

The Golf is currently on its eighth generation from 2019. It has been a great success for Volkswagen with about 35 million units sold worldwide.

Let’s take a brief look at how Golf has evolved in eight generations.

In 1974 VW released the first generation of the Golf as a replacement to the air-cooled rear-engined Beetle. The Golf was a completely new vehicle with a completely new layout that shifted from round to angular, a paradigm shift then. The main design elements of the Golf mk1 were a horizontal front fascia with a slim grille and downwards protruding headlights, a silhouette with an upright solid C-pillar, and striking wheel arches.

The interior of the base 1974 Golf was pretty much basic, its dash consisted of an instrument cluster with two large round meters, an AM radio, and fan controls below the radio. The spindle-thin A-pillars provide great forward visibility, the seats are comfortable and spacious for a car of Golf’s size, and the rear boot can accommodate several small bags. The release of the 1976 Golf GTI added the now-famous Golf-ball shifter and plaid seats.

In 1983 the second generation (mk2) Golf was released. This model was larger, heavier, and more aerodynamic than the first generation with a wheelbase that grew by 75 mm, length by 180 mm, width by 55 mm, height by 5 mm, and weight by 120 kg. Unlike the first-generation model whose exterior was designed by Giugiaro, this model was developed in-house whereby its general lines were maintained, but the car styling was a bit curved. Some of the new design features included a rear spoiler and dual headlights.

The interior of the Mk2 Golf was pretty nice and neat, grew in size compared to the Mk1 Golf, and offered comfortable seating for both front and rear seat occupants. The decent-sized boot is there to accommodate extra luggage when needed. The dash is well laid-out and functional, with basic interior features and control buttons.

The mk2 Golf came fitted with a 1.8-liter (EA827) inline-4 petrol engine with 110 hp and 114 lb-ft of torque as standard, but there were other petrol and diesel options. This engine was mated with a five-speed manual or a three-speed auto transmission.

The  VW Golf Mk3 was released in 1991. The Mk3 Golf continued in the same trajectory that saw the Mk2 dimensionally growing, so did the mk3, which was bigger than the Mk2, but remained a Golf. This growth in size made the car safer, spacious and improved the car’s handling.

The interior of the Mk3 Golf is dull a bit, but the finishing is high quality. The driving position is great and comfortable. Maneuverability is smooth, although the steering is heavy. The growth in size has created a spacious interior with enough leg-, head-, shoulder-, and knee room for all of its five occupants. The seats are comfortable and supportive while the interior is stylish but very, very dark. With this release, front airbags became standard.

Storage-wise, the Golf has a good-sized boot, while split/folding rear seats are now standard in all models. Other storage spaces include center console storage, front door bins, and a glovebox.

The Golf Mk 3 came fitted with several engines including the 1.4, 1.8, and 2.0-liter engines. The base engine was the 1.8-liter inline-4 petrol engine, while optional engines were the 2.8-liter inline-6 fitted on the VR6 flagship with 174 hp, the  1.6-liter engine with 100 hp, and the 2.0-liter 16v fitted on the GTi with 150 hp. These engines were mated with a four-speed automatic, four-speed manual, or five-speed manual transmission.

The fourth-generation (Mk 4) VW Golf was unveiled in 1997 as a 1998 model. Like the two previous models, the Mk 4 Golf has grown in size and weight and is more sophisticated.

The Mk 4 Golf was designed with the original Golf DNA in mind by having a powerful C-pillar, a steep rear, and a long roof.

The cabin is perfectly finished and spacious. The seats are comfortable, supportive and provide a cosseted feel. The dash is simple and well laid out, the driving position is good with great front visibility. The controls are within reach and responsive.

The Mk 4 has a reasonable boot, enough to accommodate family luggage for a holiday. The car has several other storage options including a glove box, cup holders, pockets for sunglasses and phones, etc.

The Mk 4 is packed with several standard safety features which include ABS, two front airbags, side airbags, Electronic Stability Control (ESC), and an ISOFIX child seat anchor on the rear seats.

The Mk4 Golf came with the option of several engine choices which include the 1.4, 1.6, 1.8,  2.0, and 2.8-liter V6 petrol engines, and later the 2.3-liter (VR5) 5-cylinder and 3.2-liter R32 petrol engines were introduced as new additions to the Golf range. There was a choice of diesel engines as well. Apart from the VR5 and R32, the rest of the engines were part of the MK3 Golf line-up. These engines were mated with either a 4-speed automatic, 5-speed Tiptronic automatic, 5-speed manual, 6-speed manual, or a 6-speed dual-clutch DSG transmission.

Like previous Golf releases, the Mk 5 Golf also followed the DNA of the Mk 1 which remains the basis, but the Mk 5 Golf looks were reinvented. It was designed with the characteristic Golf C-pillar, the unmistakably sporty front, a powerful rear, and a muscular silhouette. The redefining part of the Mk 5 Golf is the facial: like never before the bonnet follows the headlamp contours typical of sports cars.

The Mk 5 Golf also featured many technical innovations such as the bi-xenon headlamps, laser-welded body, a panoramic sunroof, rear side airbags, 7-speed DSG, and four-link rear suspension. Other new technical features on the Golf V include the world’s first Twincharger (TSI) and a turbo gasoline direct injection system in the GTI.

The Mk5 Golf came fitted with an option of 1.4, 1.6, or 2.0-liter petrol engines, turbocharged 1.9 or 2.0 TDI diesel, or a naturally aspirated 2.0 SDI diesel. In 2006, some new engines were introduced which included the 140 hp 1.4 TSI/TFSI twincharger petrol, the fuel-efficient BlueMotion with an average consumption of 26.7km/l. These engines were mated with either a 5-speed manual, 6-speed manual, 6-speed glove boxTiptronicic, and a 6 or 7-speed dual-clutch DSG transmission.

The sixth-generation VW Golf (Mk6) was unveiled at the Paris Motor Show in 2008 as a 2009 model. The Mk6 brought a quiet revolution into the Golf range, and a touch of luxury, and safety technologies borrowed from the luxury brands.

The exterior styling of the Mk6 Golf is so similar to that of its predecessor the Mk5, but it was better built.

On the inside, there were some new and improved cabin features. The Mk6 Golf has an upmarket interior with premium styling, finishing, and materials used. The cabin is quiet and comfortable, it radiates quality with a stylish touchscreen stereo system, some neat air conditioning controls, and an easy-to-read white-backlit instrument cluster. The driving position is great, it features an adjustable seat and steering column and all-round visibility is superb. The seats are supportive and comfortable, with enough headroom, shoulder room, knee room, and legroom for all occupants.

The Mk7 Golf is built on Volkswagen’s MQB platform which made the car design more dynamic. This platform moved front wheels further forwards resulting in shorter front overhangs and the bonnet becoming longer. The cab also moves to the rear, creating what is known as ‘cab-backward impression. The long bonnet and the cab further backward create proportions typical of luxury class vehicles.

The Mk7 Golf grew in size which gave rise to a much spacious cabin compared to the Mk6 Golf, this resulted in greater shoulder room for all occupants, better rear legroom, and more boot space.

Step into the Mk7 Golf and you’ll be greeted by a first-class fit and finish, first-class materials, and some slick design that give the car some upmarket appeal. Standard features include a 5.8-inch infotainment touchscreen, Bluetooth, and a DAB radio.

The Mk7 Golf came fitted with either a turbocharged 1.2-liter with 84 hp or 1.4-liter with 138 hp petrol engines and 1.6-liter with 104 hp or 2.0-liter with 148 hp diesel engines. There was also an optional 1.6-liter TDI BlueMotion engine with average fuel consumption of 31.2 km/l. The plug-in hybrid combined a 1.4-liter TSI engine with a 100kW motor powered by a 62kWh battery. These engines are mated with either a 5 or 6-speed manual, 6 or 8-speed automatic, and 6 or 7-speed dual-clutch DSG transmission.

The eighth-generation VW Golf (Mk8) was unveiled in 2019 in Wolfsburg.

The Mk8 has similar dimensions to the outgoing Mk 7, but looks are different. The facial of the Mk8 features a blade that cuts across the vestigial grille and into the LED headlamps. On the side, a new crease runs from the front to the rear. At the rear, there are newly shaped tail lamps and a more slit-like rear screen.

The dash of the Mk8 is neat and well finished, it features an 8.25-inch centralized touchscreen and a 10.25-inch digital instrument cluster, with most controls shifted from physical buttons to on-screen functions. The car is roomy; it can comfortably accommodate four people although it is a five-seat car. The occupants are accorded with decent head- and legroom. The car also comes with several storage options in the cabin and cubby holes. There are also well-placed USB-C charging points and mobile phone storage points. The Mk8 has a 380-liter boot that can extend to 1,237 liters with the seats folded.

The VW Golf was introduced in 1974 and over the years has evolved to become a supremely well-developed and ideal family car with the broadest range and appeal for every taste and price.

The Golf is the definition of the hatch world, that’s universally known and understood. Each generation is an evolution of the previous model, always springing up a few surprises. And that’s part of what made it so successful. Apart from that, the Golf is reliable, efficient, and durable even as a used car.

Please visit BE FORWARD and check out our list of 400+ used VW Golf.