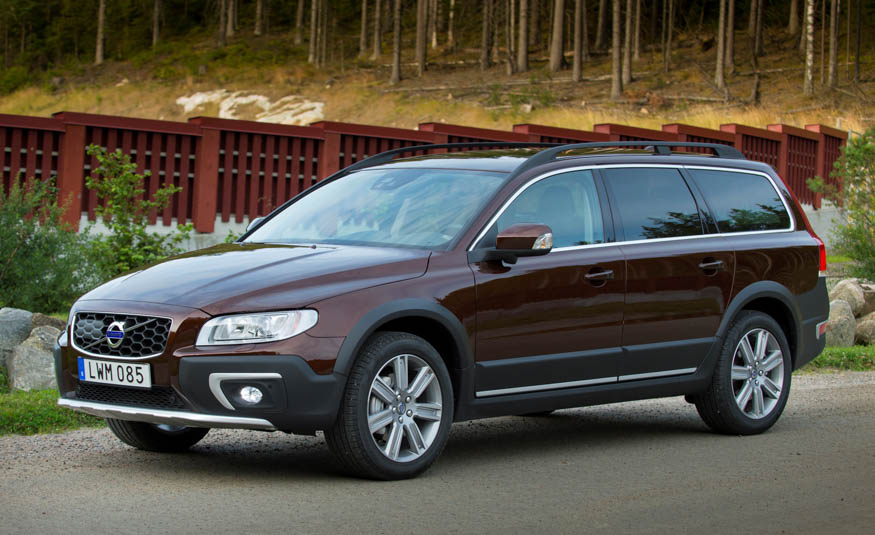 The luxury crossover-SUV is trying to take over the world. Think that is a bold statement? Look around you, they are everywhere. Want further proof? Name a manufacturer that does not have an entry in the segment. They seem ubiquitous, as if everyone, irregardless of status or station, wants one of these practical luxury transports. The near unlimited availability of these units may seem as a boon to many buyers, but it is not. What it does is cause confusion. Which model is best; which is worst; which will not destroy my bank account? All of these questions cross the mind, making it difficult to buy based on facts, not brand loyalty. That is why we built this list. We will cover a few interesting tidbits for every globally available 2016/2017 model in the segment; from sporty or spacious and posh to bland. In the interest of full disclosure, our list starts with the worst in the segment and moves to the best.

The Volvo XC70 is a definite attempt to fuse an SUV and an estate. Not truly one or the other, it could be accurately described as an estate with a touch of the outdoors. Your powertrain options begin with a turbocharged five-cylinder that offers 250 bhp. The fiver is mated to a six-speed automatic. Despite more than 21 cm of ground clearance, the XC70 is clearly a lifted version of the V70 estate. Even with all of the standard safety gadgets that Volvo adds to its vehicles this is a low ranking model to consider.

The XC60 is Volvo’s true crossover SUV. Charming and well appointed, it a strong effort to sway buyers from the German manufacturers. The XC60 delivers a supple ride and solid powertrain options. The base engine is a 240 bhp turbo four-cylinder. If you opt for AWD, the starter engine is the same five-cylinder found in the XC70. Buyers can upgrade to the top choice of a turbo and supercharged four-cylinder that thrusts 302 bhp to the ground. Both fours are paired to an eight-speed automatic, while the five is mated to a six-speed. The XC60 would rank much higher if it were not for the poor function of the automatic stop-start function used in the engines. Conceptually, the stop-start function improves fuel economy, but the version used in the XC60 creates a delay in takeoff that is noticeable and annoying. 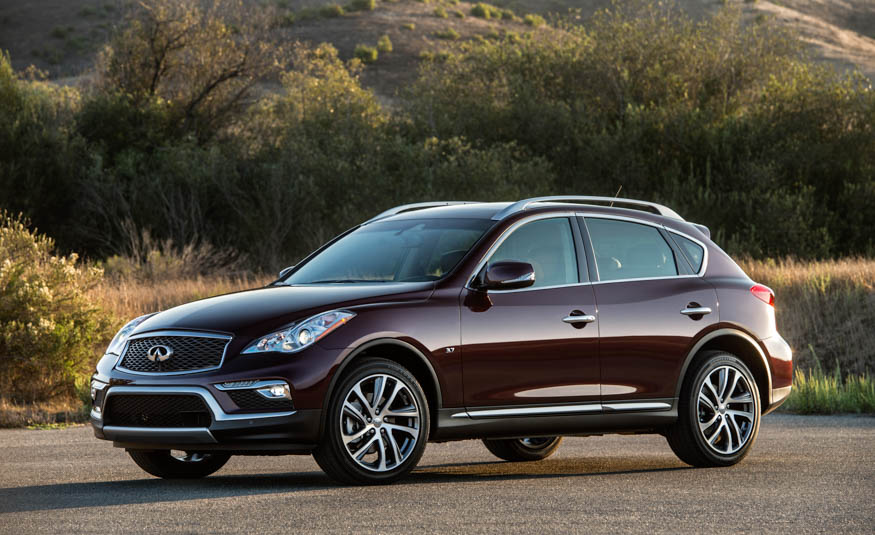 The Infiniti QX50 offers a beefy, composed ride in a segment that features many anemic powertrains. The only powertrain available is a V6 that offers 325 bhp upon demand. The seven-speed automatic gearbox is more than up to the task of delivering crisp, instantaneous shifts. Buyers get a few extra centimeters of legroom in the rear for 2017. What they do not get is an especially responsive driving experience. The QX50 also suffers from an outdated exterior and could use a refreshed interior.

The Land Rover Discovery Sport is a bit of a dapper Dan. Smooth and sharp looking at all times, it is hiding a very serious off-road credentials. It is a Land Rover, after all! Standard AWD and Land Rover’s Terrain Response system help it adapt to sand, snow, rocks, or mud. Where the Discovery Sport fails is in mating a 240 bhp turbo four with a nine-speed automatic gearbox. The results include delayed throttle response and unwanted surges. Throw in a flinty ride, and you have a middle-of-the-road crossover SUV.

The Lexus RX offers a radical exterior that will help you stand out in a crowd. The interior is plush and smooth riding, with none of the toughness you would expect in a vehicle meant to go off-road at any point. The standard powertrain is a V6 capable of 295 bhp, mated to an eight-speed automatic gearbox. The RX is available in FWD and AWD. The drawbacks to the RX are poor fuel economy and an infotainment center that is confusing at best.

You may have trouble wrapping your head around the idea of a crossover SUV from a manufacturer that expends so much effort building sports cars. Audi has masterfully blended a solid, yet compliant chassis with utility and all-season capability. The base engine delivers as you would expect from a base anything…nothing sporty. The entry level powertrain is a turbocharged four that barely produces 200 bhp. If you upgrade one level, you will get a supercharged V6 that punches 272 bhp to the wheels through an eight-speed automatic gearbox. AWD is standard; but, if you want a truly sporty Audi-ish ride, you will need to pony up for the 354 bhp SQ5.

Replacing, but selling side-by-side with the Cadillac SRX, the XT5 is a new offering for the 2017 model year. The XT5 offers superb aesthetics and prestige whether you are driving near million pound homes or parking at the nearest druggist. The XT5 offers a more daring figure than the SRX, so is sure to appeal to a wider demographic. The XT5 combines lightweight construction and a strong 310 bhp V6 to create a nimble machine that is sure to let you feel in charge under any road conditions. The Cadillac XT5 would rank much higher, but near lowest in class fuel economy numbers hold it down.

The BMW X4 is similar to the Volvo XC70 in that is simply a changed version of another offering. The X4 is a mechanically identical morph of the BMW X3, given a fastback roofline and a smaller cabin. The roofline creates a less utilitarian vehicle with compromised visibility. There are three engine choices: a 240 bhp turbo four, a 300 bhp turbo I6, and, for buyers who wish to have a near-M experience, there is the M40i twin scroll turbo I6 that provides 355 horsepower whenever asked. The roofline and decreased visibility are the only reasons the X4 doesn’t rank higher on our list. 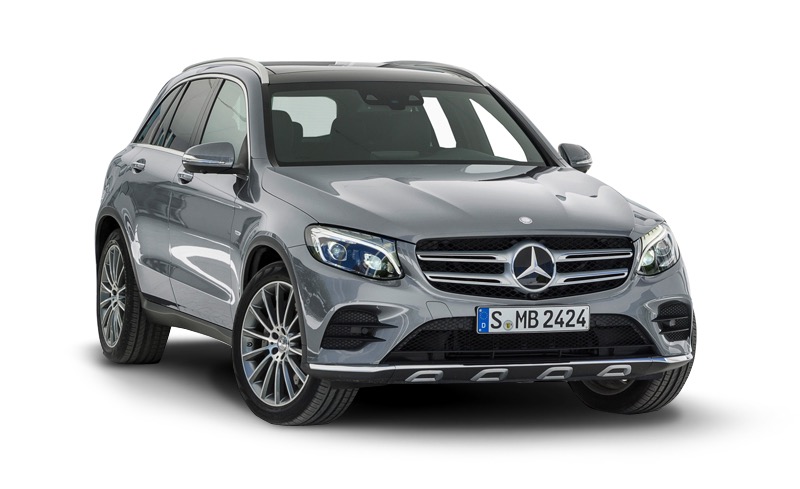 If a shade tree mechanic had thought to put a C-class saloon on stilts, he would have been laughed at. When Mercedes-Benz does it, the world calls it the GLC-class crossover SUV. What buyers get is a more than competent vehicle that is able to take them nearly anywhere they could possibly want to go.

The C-class interior is carried over, as well as many aspects of MB’s safety tech, like: collision prevention; crosswind assist; and  adaptive suspension. The base powertrain is a 241 bhp turbo four that seamlessly pairs with a nine-speed automatic with paddle shifters. The GLC is normally a rear-wheel drive vehicle, but AWD is an option…one that most buyers should consider quite seriously.

We find ourselves circling back to Bayerische Motoren Werke. The X3 far outshines the X4 listed earlier. The X3 combines utility and sophistication so well that it seems to be effortless. The petrol powertrains are a 240 bhp four and a 300 bhp six. Diesel aficionados will be disappointed to know that the only offering is a 180 bhp turbo four that offers great fuel economy, but little else to be proud of. Each engine is paired to a more than adequate eight-speed automatic. The base model is equipped with RWD, but all other trim levels have BMW’s xDrive AWD system. The X3 is a great all around choice, but, well…the next two SUVs are too tough to beat.

If the Macan was in a movie, the title would be Honey, I Shrank The Cayenne! The Macan shares basic architecture and a platform with the Audi Q5, but the upgraded trim levels S, GTS, and Turbo are much quicker and more nimble than the Q5. The secret is simple: better engines. The S offers 340 bhp; the GTS 360 bhp; and the Turbo pushes 400 hp through a standard seven-speed automatic gearbox. 2017 will see a new base unit that is powered by a 252 bhp turbo four. The new base unit will lower the sticker to a modest(for Porsche) L38,000. A soft brake pedal and non-Porsche-like steering cause the Macan to fall into the second spot on our list. Well, that and the top spot is filled by a Jaguar. 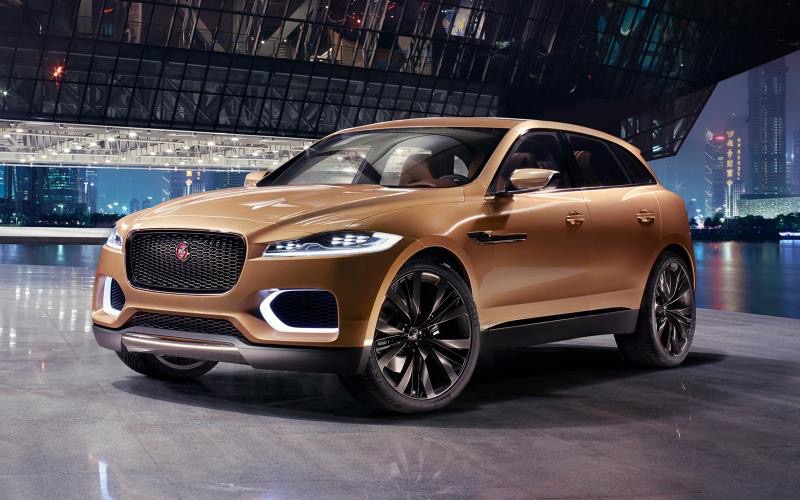 The F-Pace marks Jaguar’s first foray into the SUV arena and the automaker has hit on all cylinder; creating a multi-faceted masterpiece. Jaguar brings sexy styling, athleticism, and raw power to a crowded table and manages to end up at the head of said table. Power is provided by either a 340 bhp supercharged V6 or a beefier 380 bhp supercharged V6. AWD and an eight-speed automatic are standard. Jaguar plans to add a diesel offering after testing the waters for a few model years. As if the powertrains were not enough, the F-Pace is built with as much aluminium as possible, outstanding handling, and body roll has been nearly eliminated.