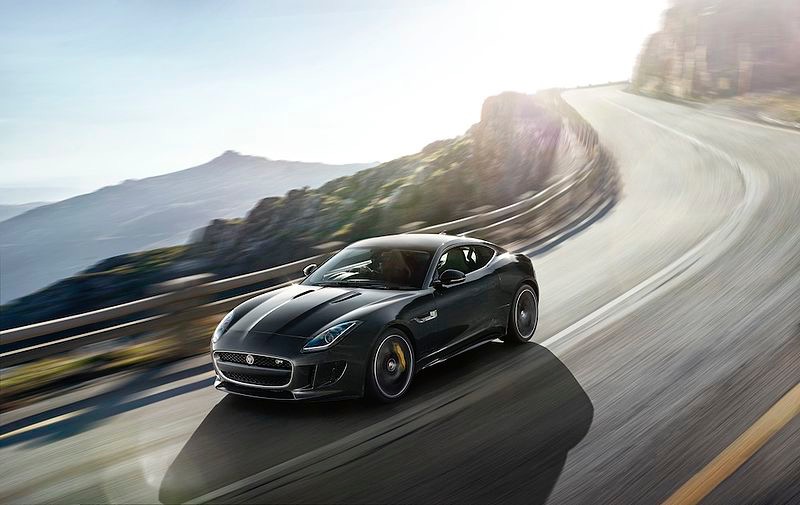 We all know that the most beautiful people gather together many times a year to celebrate their own beauty. Occasions like the Oscar’s and the Cannes Film Festival are proof that beauty gathers to honor itself on a regular basis. What if cars had overinflated egos as well? Which ones would gather to preen and run around tracks all day for the common people to photograph and fawn? Which car would peacock enough to standout as the most beautiful? As with people, the most beautiful is a highly subjective decision, but we think that the following five cars would be serious contenders for the top spot on the ”Podium of Beauty” no matter who was judging.

The Jaguar F-Type is a truly inspired sports car. Available as both a roadster and the coupe pictured above, the F-Type offers superb lines and a powerful stance that conveys the single purpose of breaking speed limits worldwide. It is a bit surprising that a Jaguar coupe is rated higher than its roadster counterpart, but all you have to do is look at the sleeker lines, plunging roofline, and wraparound taillights to see the attraction.

Open the bonnet and you will find a variety of engine choices. Entry level models are powered by Jag’s 3.0 litre V6 supercharged petrol plant. Sounds smallish, but it offers up 335 bhp and will bullet from 0-100 km/h in just 5.1. The top option, found exclusively in the coupe, is a tuned V8 R engine that thrusts 540 bhp down the throat of any paved road foolish enough to tackle it. 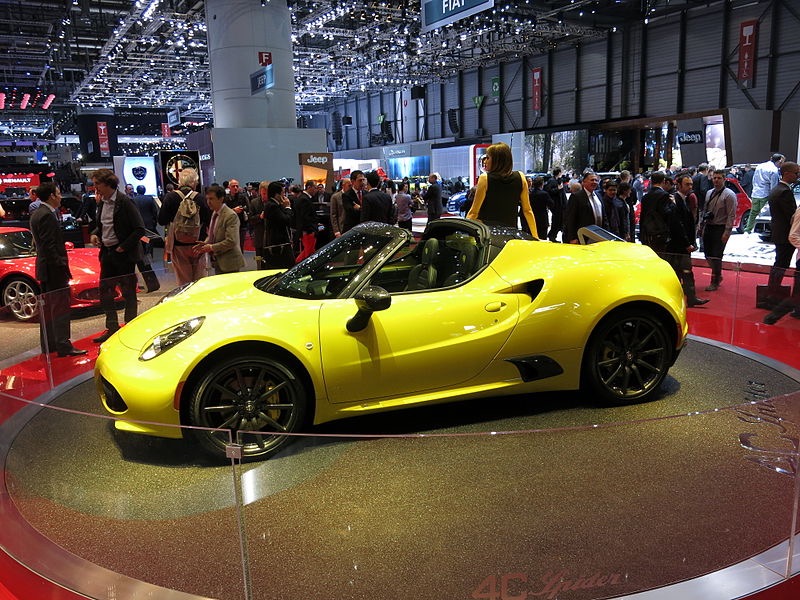 A quick scroll though images of Alfa Romeo offerings from the first to most current will quickly show you that there are no ugly Alfas to be found. Well, maybe the ones built for police use, but the police do not need beautiful duty vehicles anyway. The Alfa Romeo 4C platform is very lightweight, thanks mainly to the judicious use of carbon fiber and aluminum. The car is built using a carbon fiber tub and crash boxes. The majority of the hybrid frame is built from aluminum, allowing the 4C to have a curb weight of just 895 kg.

No matter how meager a car’s curb weight, it must have great lines and plenty of power in order to standout. The 4C delivers on both points. The body can only be described as well rounded, plunging, and hungry. Power is delivered by a turbocharged 1.75 litre I4 that provides 240 bhp at 6000 rpm. The Spider has a 0-100 km/h time of 4.2 seconds. There is also rumor of a tuned 1.8 litre engine on the horizon.

Sleek, powerful, and intimidating…all words that easily describe the Pininfarina designed style of the Ferrari 458 Italia Speciale. You could never run out of appropriate adjectives to describe the sheer sex appeal of this car.

The Speciale is the top performance edition of the 458 Italia and can be easily distinguished in several ways, including: unique forged wheels, a vented bonnet, a taller rear spoiler, and active aerodynamics   that include front and rear movable flaps to control downforce and drag at top speeds. After all, if you have a chained beast, you want to try to keep it on the road. Power is provided by a 4.5 litre Ferrari/Maserati F136 V8engine that is capable of 597 bhp at redline(9,000 rpm). The 458 features direct fuel injection, a break from Ferrari’s tradition for its road cars. The 458 Speciale can jump from 0-100 km/h in just 3 seconds and can sprint to 201 km/h in a mere 9.1 seconds. Forget chained beast, this is barely controlled lightening. 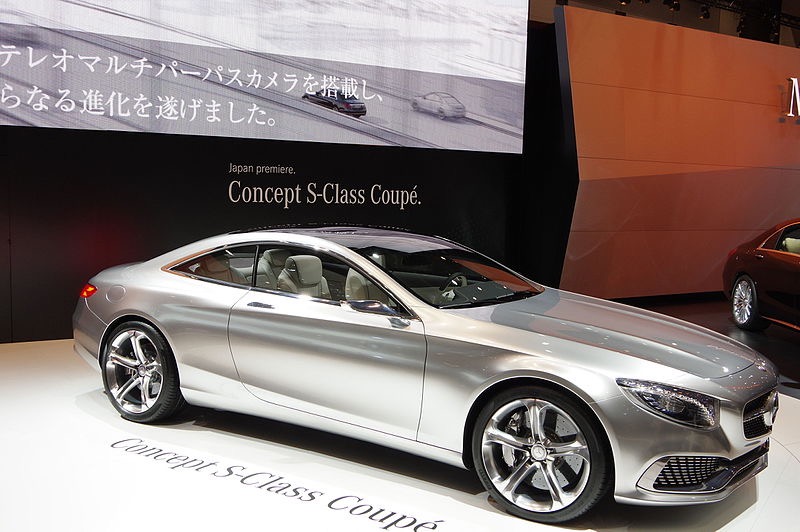 The Mercedes-Benz S-class coupe is a far cry from the three-wheel klutz that Karl Benz patented in 1886. This is a long, sleek, head-turner that seems to imbue superpowers upon its owner. How could it not, given the powerplant that sits under the elongated bonnet?

The entry level 2015 Mercedes-Benz S-class coupe is powered by a road hungry twin-turbo V8 easily capable of 455 bhp. Upgrading to the S600 will get you a twin-turbo V12 that will blow your mind every time you push the pedal. If that is not enough power, there always the IMSA-tuned S63 AMG Coupe that offers 720 bhp. Add in the world-renowned luxury that Mercedes-Benz puts in every car,,,whew, what a machine! 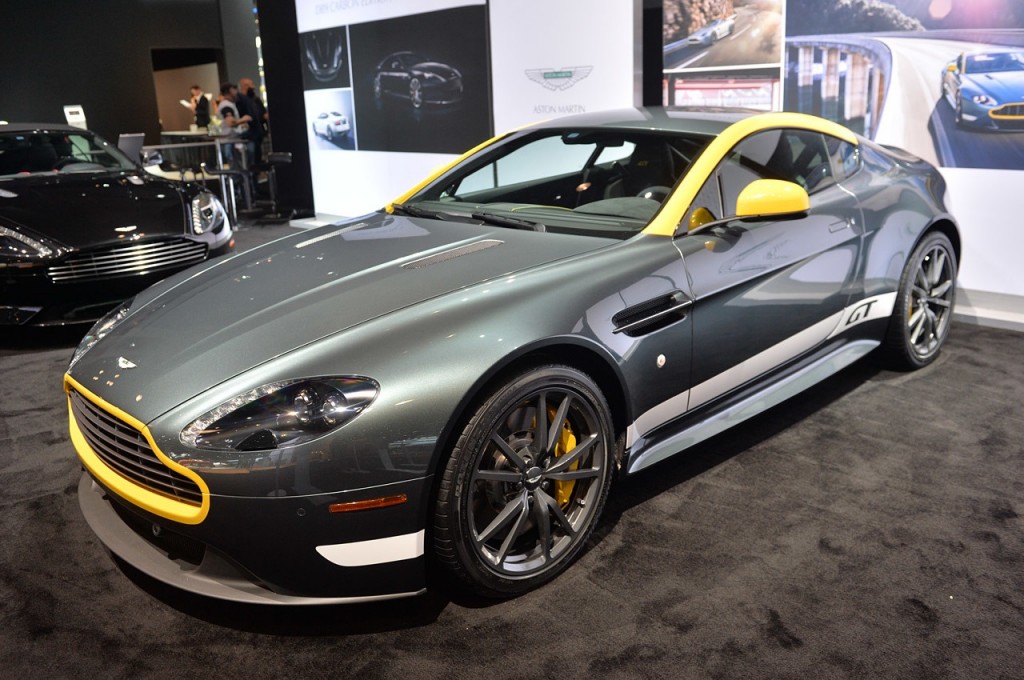 Last on our list, but not in our hearts, is the Aston Martin V8 Vantage. The V8 Vantage features the clean, graceful lines that buyers have come to expect from every Aston Martin product. The V8 Vantage not only delivers the expected short deck and long hood of an Aston Martin, it delivers a superb example of everything that the company represents in the automotive world.

Power is delivered to the rear wheels by a 4.7 litre V-8. The intake airflow and programming have been improved for 2015, allowing the V8 Vantage to offer 430 bhp. The engine is capable of a 0-100 km/h time of just 4.0 seconds when in competent hands. This is a car that James Bond would be thrilled to own.

While these cars transcend other offerings(in our opinion) there are many vehicles worthy of mentioning. Some that were serious contenders for this list may have made your list instead. Beauties like the Lamborghini Huracán LP610-4, Porsche 911, and the soon-to-be-replaced Audi R8 come to mind along with Koenigsegg and the Bentley Continental GT. The list could go on for ever if we started listing North American, Australian, and Japanese entries. Do you have a specific model that you would rank higher than the cars on this list? If so, tell us about it.