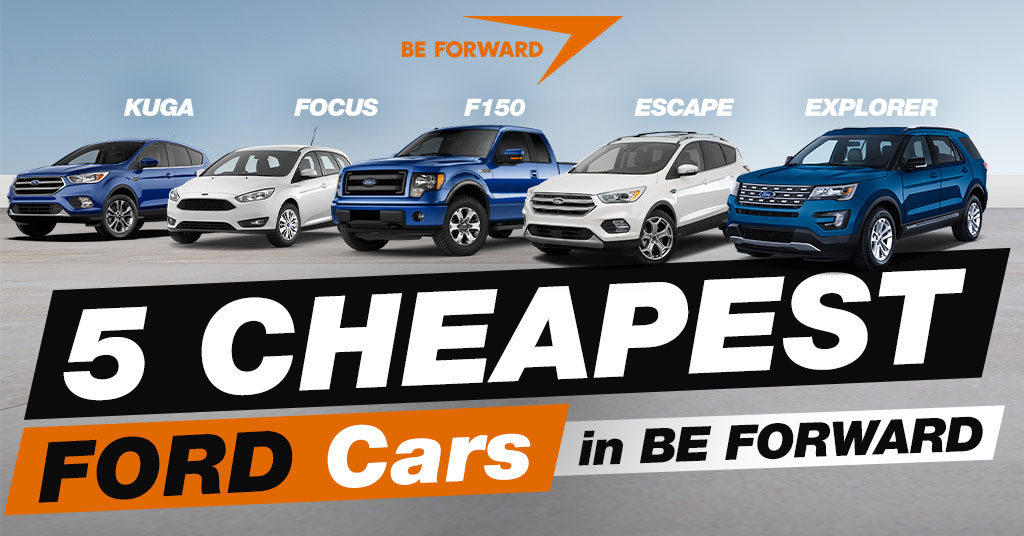 Ford is an American automaker that is so popular, especially in the American market, and markets a wide range of automobiles, the lineup includes tractors, buses, trucks, and pick-up trucks around the globe. Ford vehicles are highly known for their state-of-the-art interiors, reliability, stylish design, advanced features, and fuel efficiency which make them more attractive among buyers

In this article, we will talk about the 5 cheapest Ford cars in BE FORWARD.

The Ford Kuga, also known as the Ford Escape is a 5-door SUV that was introduced in 2012 and is still in production with over 3 generations. The Kuga is available in an all-wheel-drive/ front-wheel layout and also fitted with some advanced standard features which include keyless entry, navigation, auto start/stop system, driver and passenger airbags, side airbags, power windows, power steering, front and rear fog lights, an anti-lock braking system, electronic brake-force distribution system, brake assist, electronic stability program, and genuine leather wrapped-steering wheel.

Ford Focus is a compact hatchback produced by Ford Motors from 1998 to the present. In 2018 the 4th generation Focus was released.

The Focus is a 5-seat car with 2 rows. The front seats are roomy and comfortable with enough leg and headroom; while at the rear, the back seats have limited space, so tall passengers will find the space limited. The Focus cabin finishing is done with high-quality materials and is very well designed. Optional features found on higher spec models include a heated steering wheel, leather upholstery, and heated front seats.

Under the hood, the base Focus comes fitted with a direct-injected inline-4 2.0L engine that generates 160 hp.

Ford Motors began the production of the F-Series in 1948 as a light-duty truck and has evolved since, and is currently sold as a full-size pick-up truck. The F-150 is part of the F-Series range and is Ford’s biggest-selling vehicle, with its 14th generation model launched in 2021.

The F-150 Single-Cab model seats 3 people, while the Super-Cab and the Double-Cab models can accommodate up to 5 or 6 people. The F-150 comes with the option of cloth, leather upholstery, or vinyl depending on trim. Other optional features include heated and cooled front seats, power-adjustable and massaging seats, and a heated steering wheel. The front seats of the F-150 are wide, supportive, and comfortable.

Ford vehicles are one of the most known, not just in the North American market but around the globe due to their exquisite design, innovative features, impressive performance, outstanding fuel economy, and impressive reliability. So, if you need a cool-looking car with plenty of space, just try the Ford cars. Please visit BE FORWARD and check out our list of used Ford listed for sale.