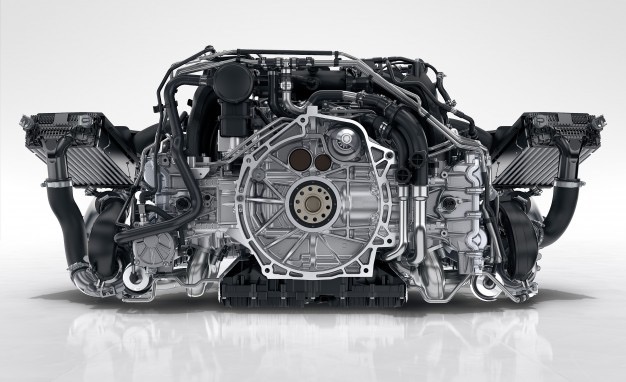 Porsche has long restricted the use of turbochargers to certain models. In the 911, a turbo was only available if you purchased the Turbo model. That will all change for the 2017 model year, when Porsche will introduce a twin-turbo engine into its 911 Carrera and Carrera S units, so every Porsche from 2017 on will be turbocharged, following a pattern stamped by the likes of Audi, BMW, and Mercedes-Benz.

While the near universal turbocharging may sound as if it is a move to appease buyers, it is not. It is a practical business move that will help Porsche meet emerging fuel efficiency and environmental requirements in Europe and North America. Building a turbo to meet these needs was not as much of a challenge as building one that still offered the growl and energy that owners expect from a 911. Let’s have a look at Porsche did just that.

The new engine, dubbed the 9A2, is a redesign of the 9A1. Despite being a redesign, it retains the basic flat-six layout and dimensions of the A1. The 9A2 is still built with two halves; each with a separate crankcase and bank of three cylinders. The first improvement is that each aluminium cylinder bore is plasma coated with iron that is 150 microns thick. The cylinders have slight undercuts so that the coating will mesh mechanically with the aluminium. The iron coating is more durable than the coatings used in earlier models, thanks in part to the plasma-coating process.  Additionally, the new process gives Porsche the option to use a stronger aluminium alloy called  AlSi7MgCu0.5. The new cylinder setup shaves 1.5 kg from the engines weight. Porsche is able to further reduce the weight of the 2017 by using a simplified oil pump and a plastic oil sump. The total weight shed by the three items is about 4.7 kg. 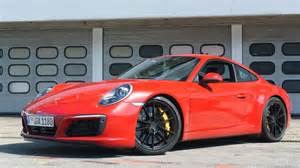 In general, modern turbocharged engines are smaller than older units. The new engine(designated as the 991.2) has a bore of 91.0 mm and a 76.4 mm stroke, giving the engine a total displacement of 2981cc. That may sound like a significant drop from former Carrera models given that the base Carrera has a displacement of 3436cc and the S displaces 3800cc prior to the 2017 model, but it is not as significant as you may think. Being slightly less oversquare allows for a more compact combustion chamber that has a higher efficiency rating and the similar stroke dimension leaves room for the high-end revs that Carrera owners are sure to hit.

In reaction to the smaller combustion chamber, the size of the valves had to be reduced proportionally. For 2017, the intakes will be 34.3mm in diameter, down 5.2mm in the base Carrera and 7.5mm in the S model. On the other side of the cylinder, the exhaust valves are dropping to 29.7mm. Even though the bore is more narrow, the center spacing will remain constant at 118mm as it is in all of Porsche’s water-cooled boxers. The center spacing was retained because the crankshaft still has six crank throws and seven main bearings that are the same size they were in the previous engine.

The new engine still uses Porsche’s VarioCam Plus featuring selectable concentric valve lifters to achieve variable valve timing and lift on the intake cams. The intake and exhaust cams can be phased over a 50-degree range. The intake timing is nearly identical to the old engine, but the exhaust timing had to be calibrated to make the most of the turbo’s performance capabilities. The new engine does eliminate the variable plenum volumes and port lengths of the previous intake manifolds.

Haven’t Had Enough Yet?

The side-mounted direct injectors have been moved to the top,next to the spark plug. The injectors now spray at 3625 psi, nearly double that of the old injectors. The combination of a top spray and higher injection pressure creates a finer atomization of the fuel, resulting in a better fuel/air mix in the chamber. To further improve on combustion efficiency, key to improved fuel efficiency, the intake ports were refined to allow for more tumbling of the fuel mixture within each chamber. As a result, there are fewer raw particulates in the exhaust. Since the American Environmental Protection Agency is phasing in a two-thirds reduction in particulates beginning in 2017, this allows the new Carrera to fall closer in line.

The compression ratio had to be reduced to meet the demands of the BorgWarner turbochargers. Prior to 2017, that ratio is 12.5:1, but will now be 10.0:1. Speaking of the BorgWarners, they each have 45mm turbines with impellers that are 49mm in the base model and 51mm in the S units. The base unit will have a boost pressure of 13.1 psi where the S type will features a pressure of 16.0 psi. So that intake air temperature doesn’t get out of hand, Porsche installed a pair of air-to-air intercoolers on either side of the engine.

You may be thinking that all of these new components have added quite a bit of weight and you would be right…40 kg to be exact. That is why Porsche reduced the Carrera’s weight in other areas. In addition to the savings mentioned earlier, the exhaust is also 7kg lighter. All told, the 2017 Carrera will weigh 23 kg more than in recent years.

Finally, to the Performance 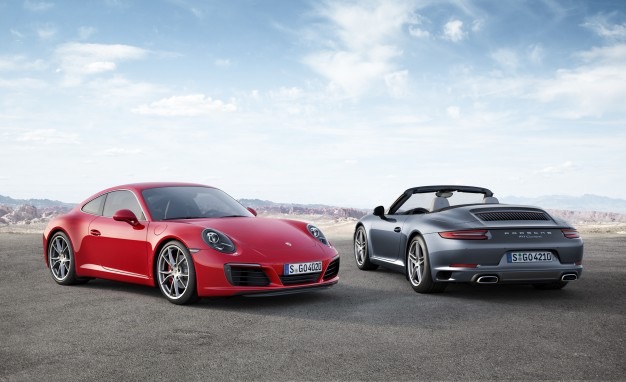 The weight gain has to be offset somehow, right? Luckily the engine delivers a higher output than its predecessor. The base 2017 Carrera will have 370 bhp and 450 N-m of torque an increase of 20 ponies and 100 N-m. The S equipped units will see a boost to 420 bhp and 500 N-m. Additionally, the new engines will hit peak torque at 1700 rpm, making the added power feel even greater. Peak power will be achieved at 6500 rpm and will hold almost unchanged through the 7500 rpm redline.

The new engine does suffer from a traditional turbo issue…lag. At 1800 rpm the engine takes three seconds to hit full torque. That lag does drop to two seconds at 2000 rpm and one second at 2300 rpm. While lag is annoying, the 7500 rpm redline charge surely offsets it. All of this sounds like a great car, maybe Porsche will make the new Carrera available for public testing. Probably not, but we can all dream, can’t we?