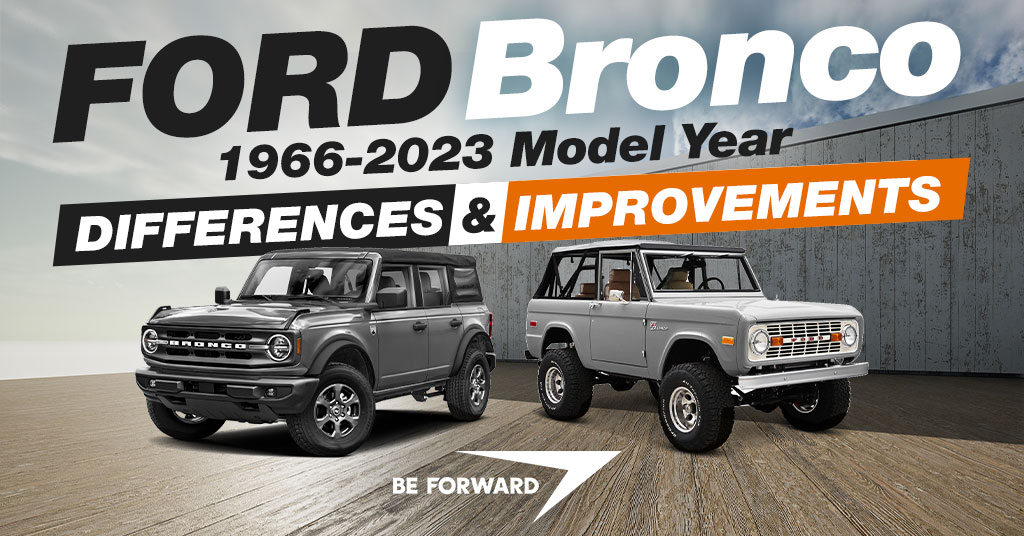 The Ford Bronco is a sport utility vehicle (SUV) manufactured by the American company Ford. The Bronco was introduced in 1966 and was originally available in three (station wagon, a half-cab, or a roadster) different body styles. Eventually, the three-door wagon gained much more popularity than the others. This resulted in Ford dropping the other two, with the roadster taken out of the market in 1968 and the half-cab in 1972. After that, the wagon is all that remained and became an icon that we all know as the Bronco.

Here we are going to take an in-depth look at this iconic first-ever SUV from Ford just to learn its ins and outs. Please read through.

The first generation of the Bronco was unveiled in 1965 as a 1966 model. Initially, it was available in three body styles, but eventually, only one survived with the rest discontinued.

The Bronco wagon is a three-door five-passenger SUV with an angular shape, a square-looking body, and a flat windshield. At the rear, it came with a full-length hardtop cover while high-end models were fitted with a removable fiberglass cover with side windows that provided ventilation for the rear passengers.

Its interior was designed to be comfortable, and the driving position is great as it enables the driver to have good visibility of the road. At the front, it is fitted with bucket seats, while at the rear it has a bench.

Under the hood, the 1966 Bronco came fitted with a 2.8-liter inline-six petrol engine with 105 hp. Later that year, an optional 4.7-liter V8 petrol engine with 200 hp was added to the lineup. These engines were paired with a three-speed manual (a three-speed automatic was added later) transmission and a two-speed transfer case with a shift-on-the-fly function that allowed the driver to switch from 2WD to 4WD while the vehicle was on the move.

The second generation of the Ford Bronco was unveiled in 1977 as a 1978 model. This model was a full-size SUV built from a shortened frame of the Ford F-100. Compared to the outgoing model, this model grew in length, width and height.

The face of the 1978 Bronco features a slant nose fitted with square headlights and turn signals underneath, a chrome bumper, a large grille broken down into small rectangular air vents for engine cooling, and a flat hood with a bulge at the center. At the rear, the Bronco still features a lift-off fiberglass hardtop that covers the rear seats and the cargo area. A rear glass that folds into the tailgate was also introduced on this model.

Inside, this 1978 model was completely redone; it came with a flat dashboard with square dials. The growth of the car’s size resulted in a spacious and comfortable interior. The front bucket seats and rear bench came covered with a mixture of fabric and vinyl upholstery.
For the first time, the Bronco offers air conditioning and AM/FM radio as options.

The 1978 Bronco came fitted with a 5.8-liter V8 petrol engine as standard and 6.6-liter V8 petrol as an option. Both engines produce 158 hp but differ in torque with 262 lb-ft and 277 lb-ft consecutively. These engines were paired with a 3-speed automatic or 4-speed manual.

The third generation of the Ford Bronco was released in 1980. Like the previous model, this Bronco was also based on the Ford F-150 truck built on a body-on-frame structure. Ford made this model smaller, lighter, more aerodynamic, and efficient while still remaining a full-size SUV.

A quick glimpse of the third generation Bronco might make you feel like its looks are just the same as its predecessor, but that is not the case. This model is smaller, lighter, and more aerodynamic, its face features a raked windshield, flat bonnet, a flat nose with a fence-like grille, and square headlights on either side.

The cabin is spacious, but the driver’s front visibility could be better. Two front captain seats,  a rear bench, AM/FM radio, air conditioning, and cloth upholstery are standard. The car has enough legroom for front passengers, while at the rear tall passengers might struggle for legroom. The windows are large enough to create an airy feel in the cabin and provide a birds-eye-view of the outside. This car can accommodate four passengers in the two-door model or five people in the four-door model. The cargo room is about 1000 liters, with enough legroom for all passengers.

Ford introduced the fourth generation of the Bronco in 1987. This release was still based on the F-150 frame like its predecessor.

The interior was upgraded as well with front seats now wider, but the passenger seat is only reclinable with no fore and aft functionality, the new instrument panel getting a sedan-look layout, new door panels, a new steering, a redesigned dashboard, and controls. Under the hood, the 1987 Bronco was fitted with the same engines that were fitted on its predecessor. The only changes were the addition of electronic fuel injection on the 4.9-liter V6 and 5.8-liter V8. On the transmission part, a Mazda sourced 5-speed manual transmission was introduced, and the 3-speed automatic was phased out and replaced by an overdrive equipped 4-speed automatic transmission.

Ford also introduced ABS braking on this model but fitted on the rear wheels only. Other features include push-button four-wheel-drive and skid plates as standard.

In 1992 Ford released the fifth generation Bronco. Like the previous models, this was also based on the Ford F-150. The 1992 Bronco was available in 3 trims: Base, XLT, and the premium Eddie Bauer.

The 1992 Bronco had several exterior cosmetic changes that include a more aerodynamic front fascia, a large redesigned grille, chromed front bumper, and headlights that are slimmer giving room to the signal lights within the same enclosure. At the rear, the Bronco comes with a redesigned chrome bumper, and the fiberglass rear roof still exists but is tightly fastened with tamper-proof Torx bolts and no removing instructions as it was no longer legal due to the brake light and three-point safety belts that were mounted on it. The 1996 Bronco incorporated turn signal lights on its side mirrors, becoming the first Ford to have this feature.

The interior also received some changes, with both the dashboard and instrument panel being updated. The instrument panel was now easy to view, and the dash featured more simple and practical features such as an AM/FM stereo, and air conditioning. Other features include power windows, mirrors and door locks, keyless entry, and an anti-theft alarm.
The seats were supportive and comfortable, with the higher trims fitted with leather front seats.

Under the hood, the 1992 Bronco continued using the 4.9-liter V6 and 5.8-liter V8 previously used until 1994 when the 4.9-liter was phased with the 5.8-liter Windsor V8 engine becoming the only option. This engine was paired with a 5-speed manual as standard or automatic transmission as an option. The wheels came with manual hub locks, used to lock to the differential when using four-wheel drive.

After a 25 year hiatus, Ford released the sixth generation Ford Bronco in 2021. This new Bronco like previous models is based on a truck, but this time not the F-Series but the Ranger. The 2021 Bronco is available as a 3-door or 5-door convertible model and in seven trims.

The face of the 2021 Bronco features a Bronco stamped flat and broad grille that honors the original, round headlights covered with a clear lens, and thin LED daytime running lights that run from the headlights to the grille. The wheels are placed on the corners for better departure and approach angles, but to also maximize interior space, the hood comes with two trail sights at the end that can also be used as tie-downs that can hold up to 68 kg. At the rear, the tailgate swings wide open for ease of loading and unloading cargo, and the cargo area has a pull-out shelf that doubles as a bench seat for camping.

The doors, roofs, fender flares, and heavy-duty bumpers can also be easily removed at the owner’s discretion.

The cabin of the 2021 Bronco is stylish and practical. The rugged cabin features rugged toggle switches at the top of the dash, grab handles on the center console, a standard 8-inch (12-inch optional) flush touchscreen SYNC3 infotainment system with Apple CarPlay and Android Auto. The instrument panel has two analog dials and a TFT display.

Under the hood, the 2021 Bronco comes with a choice of a turbocharged 2.3-liter EcoBoost four-cylinder with 270 hp and 310 lb-ft of torque, or a turbocharged 2.7-liter EcoBoost V6 with 310 hp and 400 lb-ft of torque. These engines are paired with a ten-speed automatic transmission as standard, while the 2.3-liter engine has an optional 7-speed manual transmission plus a crawler gear as an option. This car is offered with a 4WD drivetrain as standard.

From this review, we can see that the Ford Bronco was an outstanding vehicle whose production began in 1966 and went on to become one of America’s SUV of choice for the next 30 years before production halted in 1996, and resume in 2021.

The Bronco is good on and offroad usability, a great camper that is reliable, dependable, and with the introduction of the 5-door introduced in 2021, new avenues will be conquered.

If you are interested in buying a Ford Bronco, please visit BE FORWARD and check out our list of used cars on sale.