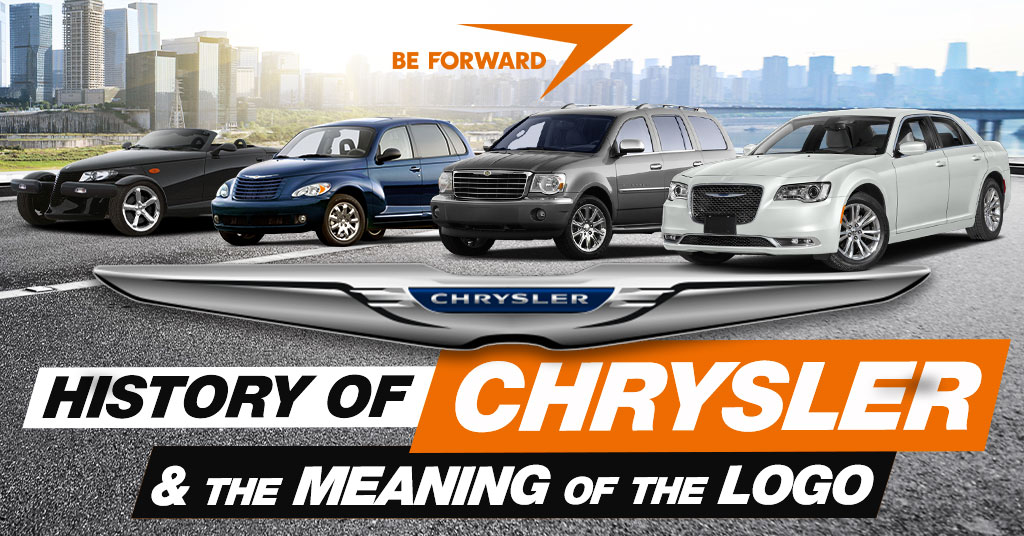 Introduction
Chrysler is an American automobile manufacturer initially under Chrysler Corporation and is currently owned by Stellantis North America. Chrysler is one of the luxurious brands offering high-quality cars, modern features, and high-performance engines that makes it stand out from the rest and on the road. Now, let us get to know more about the history of Chrysler and the meaning of its logo.

What Does Chrysler’s Logo Mean?

Chrysler has been manufacturing cars for almost a century now and as one of the largest automakers in the automotive sector, the logo carries a sense of sophistication and is easy to recognize even these days. The original logo was first designed by Oliver Clark, it was a golden wax seal in a golden circle with a stylized blue and gold ribbon hanging over the edge of the border, a rope-style decoration within the wax seal, a bar with the Chrysler name in capital letters, and a set of golden lightning bolts to signify speed. There are also other variations using this logo including one with a set of silver wings. The design was said to express the honesty, reliability, and quality of the company.

Chrysler replaced the wax seal logo in 1955, with a set of two arrow shapes pointing to the right in a black and red design, which the Dodge brand also used. In the 1960s, the Chrysler star logo was introduced. The Chrysler Pentastar logo had five points and changed the colors of the brand to blue, white, and black and was a common feature on the hoods of some Chrysler cars. It is one of the most famous logos of Chrysler according to the creator, the Pentastar logo represented dynamism, simplicity, and style but others argue that Pentastar’s points represent a series of automobile companies, Chrysler, Dodge, Dodge Trucks, Imperial, and Plymouth. The current Chrysler logo appears to be modern and sleek with sleek metallic gradient wings and its name is written in a sans-serif light grey within a blue nameplate.

The Chrysler 300C is the high-end version of the Chrysler 300 with a four-door and five-door layout that was first produced in 2004. The 300C is available in a front-engine, all-wheel-drive / rear-wheel-drive system and fitted with notable standard features which include airbags, multi-function steering wheel, infotainment system, audio, navigation, adaptive cruise control, Lane Departure Warning, Lane Keep Assist, and forward-collision warning. The Chrysler 300C comes with a 5.7L Hemi V8 engine with maximum power and torque of 368 PS (271 kW) at 5150 rpm, 534 Nm (394 lb-ft) at 4,250 rpm powered by a five-speed 5G-Tronic automatic or eight-speed 8HP45 automatic gearbox.

The Chrysler 300 is a full-sized luxury car available in a sedan and wagon body style which was first produced in 2004 and is now in its second generation. The Chrysler 300 offers four model ranges namely: Base, Touring, Limited, and 300C. It comes fitted with airbags, ABS, electronic stability control, air conditioning, power windows, navigation, cruise control, and 20-inch polished aluminum wheels. The Chrysler 300 is powered by a 3.6L V6 Pentastar gasoline engine producing power and torque of 286 PS (210 kW) at 6350 rpm, 340 Nm (251 lb-ft) at 4650 rpm mated to a five-speed automatic or eight-speed automatic gearbox.

Chrysler Ypsilon is a five-door hatchback also known as the Lancia Ypsilon that was produced in 2011. The Ypsilon is available in a front-engine, front-wheel-drive system and equipped with a 0.9L TwinAir straight-2 petrol engine with a turbocharger producing power and torque of 85 PS (63 kW; 84 hp), 14.8 kgm (145 Nm) mated with five-speed manual transmission. The engine delivers an average fuel economy of 19.3 km/L based on JC08 mode. The Ypsilon also includes some standard features like airbags, anti-lock braking system, brake assist, LED headlights, electronic stability control, and 15-inch aluminum wheels.

The Chrysler 200 is a mid-sized car that was manufactured from 2011 to 2017 with two generations and is available in a four-door sedan and two-door convertible body style. The Chrysler 200 comes with SafetyTec System which consists of forward-collision warning, adaptive cruise control, blind-spot monitoring system, Lane Departure Warning with lane keep assist, keyless entry, park assist, and airbags. The Chrysler 200 is also equipped with a 2.4L Tigershark straight-4 gasoline engine with a power of 184 hp and a torque of 173 lb-ft, and a 3.6L Pentastar V6 gasoline engine with power and torque of 295 hp, 262 lb-ft paired to a nine-speed automatic transmission.

Chrysler is one of the top automakers in the world and is known for manufacturing some of the most advanced, luxurious, and high-quality cars worldwide. Throughout the decades, Chrysler has already earned high recognitions and awards for the cars they made, and it is indeed some of the best cars we have seen. Now, if you are looking for Chrysler cars, then BE FORWARD is the right store for you. BE FORWARD not just offer thousands of car models for you, but also will help you answer any questions regarding any car models you want to purchase. So, what are you waiting for? Visit BE FORWARD to start your purchase now.