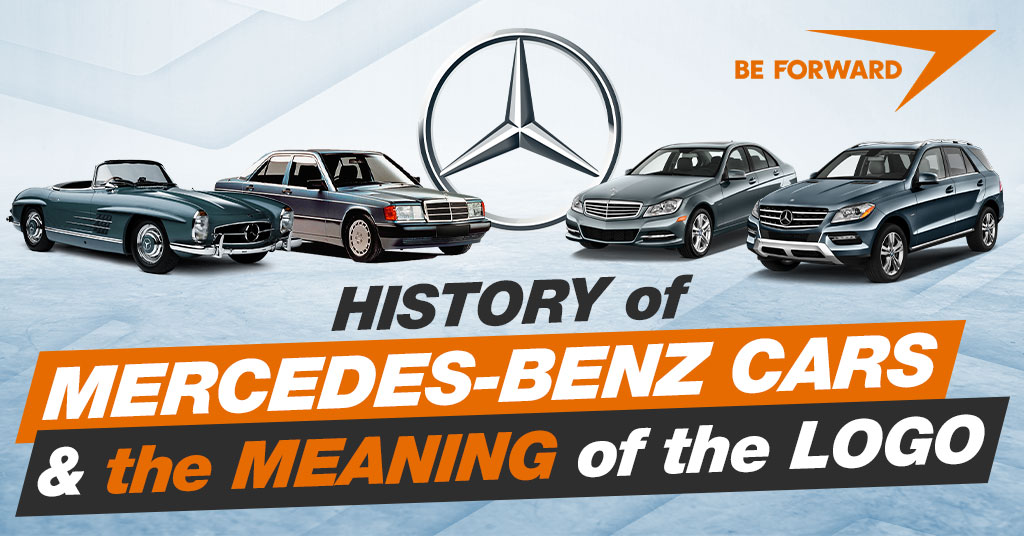 Mercedes-Benz simply referred to as Mercedes or Benz, is a German luxury automotive brand. Mercedes-Benz is a  subsidiary of Daimler AG whose headquarters are in Stuttgart, Germany. Mercedes-Benz manufactures luxury and commercial vehicles. The first Mercedes-badged vehicle was unveiled in 1926.

Daimler-AG came about after a merger between Daimler-Motoren-Gesellschaft’s (DMG) and Benz & Cie becoming in 1926. Daimler’s motto is “the best or nothing”.

In this article, we will take a look at the history and the meaning of the emblem.

The origin of the Mercedes-Benz can be traced back to Karl Benz’s invention of what is recognized as the first internal combustion engine patented as the Benz Motorwagen which was financed by the dowry of Bertha Benz (Karl Benz’s wife) and patented in January 1886. Later in 1886, Wilheim Maybach, Gottlieb Daimler, and Karl Benz equipped a stagecoach with a fully-functional gasoline engine.

In 1901 Daimler-Motoren-Gesellschaft (DMG) began marketing the Mercedes automobile and from that year the car was available on the market as an official release from Daimler Motors Corporation. The success of the Mercedes automobile caught the attention of Emil Jellinek an Austrian entrepreneur, who eventually teamed up with the group (Mayback, Daimler, & Benz) in 1902 resulting in the creation of the 1901 Mercedes which was named after Jellinek’s daughter (Mercedes Jellinek).

Jellinek’s entrepreneurial prowess and marketing strategies promoted the car to worldwide prominence resulting in the “Mercedes” name being re-registered worldwide by DMG as a protected trademark.

After the immense growth in popularity, Gottlieb Daimler and Karl Benz merged their companies into Daimler-Benz. The first vehicle bearing the Mercedes-Benz name manufactured by Daimler-Benz was unveiled in 1926. From 1926 onwards, the Mercedes-Benz brand has been known for pioneering revolutionary ideas in the automotive world.

What does “Mercedes-Benz” Mean?

The Mercedes-Benz is a brand name that is usually associated with luxury, but before becoming a household name across the world, what was the journey like? Before the brand became what it is today, it has changed names several times, beginning with Daimler-Benz. Let us walk you through trying to explain exactly what is the meaning behind the Mercedes-Benz name. Please read on

Gottlieb Wilhelm Daimler would later pass away, and in trying to steer the company to greatness, the racing enthusiast and entrepreneur Emil Jellinek was introduced to the company by chief engineer Wilhelm Maybach. Jellinek would go on to spearhead the creation of the Mercedes 35hp in 1900. Emil named the new car after his daughter, Mercédès Jellinek, whose meaning in Spanish translates to “mercy.” Later in 1902, the company registered the “Mercedes” name as its trademark. The company continued trading as Daimler-Benz, while the cars began using the Mercedes-Benz as a brand name.

What Does the MERCEDES-BENZ Symbol Mean?

The idea of using the three-pointed star came from Adolf and Paul Daimler, the sons of Gottlieb Daimler. Their father had earlier used a similar symbol to mark their family house on postcards to depict a view of the town of Deutz when he was the technical director of Gasmotorenfabrik Deutz.

In its early stages, the three-pointed star was used without the surrounding ring. It primarily adorned the radiators but was sometimes also visible on the sides of the Mercedes passenger car bonnets accompanied by the “Mercedes” lettering.

Evolution of the emblem

In 1916 the star was combined with a wide ring and “Mercedes” lettering. In 1921, Daimler Motoren Gesellschaft (DMG) registered a star in a ring as its emblem, and registered it as its trademark in 1923. The star was placed on the radiator cap in a stand-alone upright position that made it easily recognizable.

In 1925, the star and laurel wreath were merged resulting in a new signet for the Mercedes-Benz brand. This was followed by applications to register the logo and the “Mercedes-Benz” word mark as trademarks in 1925. This move pre-empted the merger between DMG and Benz & Cie in 1926 creating Daimler-Benz AG as a new company.

The layout of the new symbol maintained the circular nature of the previous symbols, with the central Mercedes star staying in place. The “Mercedes” lettering previously placed on the lower edge of the ring moved to the top, while the word “Benz” remained in place. The two laurel branches from the Mannheim brand’s trademark took the place previously occupied by the small Mercedes stars. The Laurel branches begin from the letters “B” and “Z”, and end at the letters “M” and “S”.

Mercedes-Benz is known for manufacturing some of the luxurious, most advanced, and performance-oriented automobiles worldwide, and getting to this status is not a fluke! They deserve it. Daimler-AG has been pioneering innovative and technologically advanced vehicles from the day Karl Benz introduced his petrol-powered car in 1886. The three-wheeled, rear-engined vehicle completely disrupted human transportation for good and signified the innovative automobiles that Mercedes-Benz keeps producing to this day.

Mercedes cars are known for their comfort, premium features, entertainment options, and an awesome array of information.

If you are looking for a great car, then you should go for a Mercedes. We at BE FORWARD have a list of about 6000+ used Mercedes models for sale.