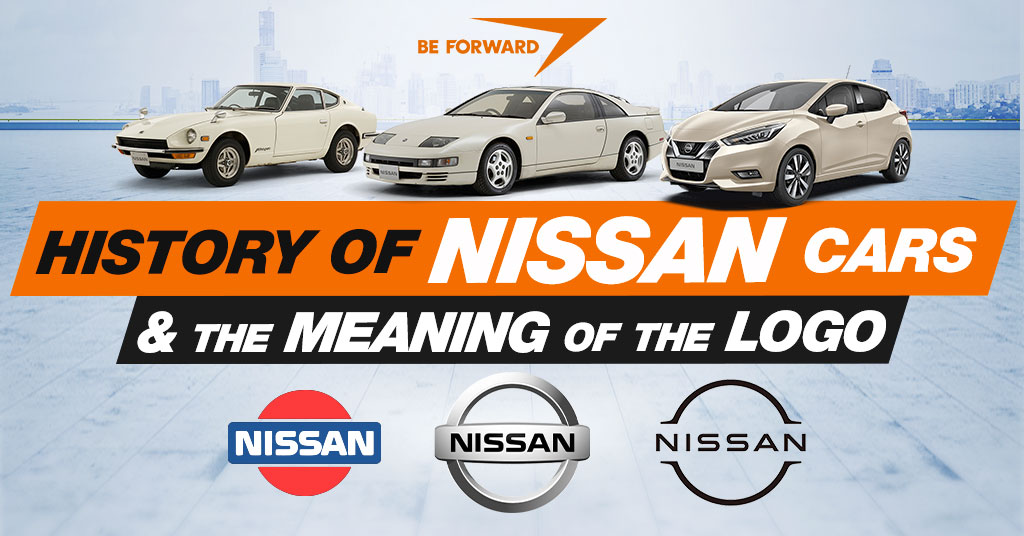 History of Nissan Cars and the Meaning of the Logo

The origins of Nissan can be traced back to 1911 and 1919 when Kwaishinsha Co. and Jitsuyo Jidosha Co. were founded respectively.  In 1925 these two companies merged to form Dat Jidosha Seizo Co., and in 1933 assets of Dat Jodosha were taken over by new investors who established the Jidosha Seizo Co. and a year later (1934) changed the company’s name to Nissan Motor Company. Nissan was engaged in the production and sale of parts and vehicles under the name, Datsun.

In 1911 Masujiro Hashimoto established a company by the name of Kwaishinsha Motor Car Works with investment from Kenjiro Den, Rokuro Aoyama, and Aketaro Takeuchi.  The company established a factory that embarked on domestic vehicle production, which eventually became the forerunner of the Japanese domestic automobile industry.

In 1914 Kwaishinsha completed the production of their first car and named it DAT which is a combination of the initials of Den, Aoyama, and Takeuchi who were the investors in Kwaishinsha.

In 1918 Kwaishinsha was restructured and re-registered as Kwaishinsha Motor Car Co. Ltd and saw its business grow to 600,000 yen in capital, and 60 employees. In 1919 they completed the production and release of the Model 41 DAT which was the first single body casting 4-cylinder engine in Japan.

In 1931 DAT Jidosha Seizo became affiliated with Tobata Casting Co. Ltd., a company involved in the manufacturing of automobile parts, with plans to advance into the automobile industry. This affiliation resulted in DAT Jidosha Seizo Co. Ltd becoming a subsidiary of Tobata Casting Co. Ltd and this union resulted in the development of the first 0.5-liter compact size passenger vehicle.

1932 The Birth of Datsun
In 1932, the company changed its name to Datsun, with “DAT” taken from the initial letters of three Kwaishinsha investors and “SON” which was changed to “SUN” due to having a Japanese word “SON” that sounded the same but meaning “loss”.

What Does “Nissan” Mean?

First narrative.
A former and last majority shareholder of Jidosha Seizo Co. Ltd, Nihon Sangyo was nicknamed Nissan at the Tokyo Stock Exchange by taking the first two letters from Nihon “Ni” and the first three letters from Sangyo “San” to form “Ni-San” long before the company had any interests in the automotive industry. But in 1933 DAT Jidosha Seizo was merged with Tobata Casting, a company owned by Nihon Sangyo with the new company renamed Nissan Motor Co. in 1934.

So there you have it. The Nissan name is a result of a nickname given to Nihon Sangyo that was based on the Tokyo Stock Exchange.

Another narrative
The Nissan name came up as a combination of Japanese characters “ni” (“sun”) and “ssan” (“birth” or “product”). Thus, the combination of the two refers to Nissan as a product of Japan, the land of the rising sun.

What Does the Nissan Symbol Mean?

The original Nissan symbol is a combination of two simple geometric shapes: a red circle and a blue rectangle on top of it, with the NISSAN name inscribed on the rectangle. Speculation is that the red circle is an homage to the Japanese flag.

The logo kept evolving, and by the 1990s the red circle and blue rectangle were replaced by chrome outlines.

In the 2000s the Nissan logo continued evolving, and this time it was based on the previous version, but slightly stylish and sleek, making use of silver colors that gave it a bold and high-end look. The perfectly spaced letters and the typeface lines made the wordmark look great wherever it was used.

In 2020 the logo evolved once again, it became a sleek and minimal badge, with the shape of the iconic Nissan emblem but with modern and stylish touches. It features capitalized black inscription placed between two arches, forming a distinguishable Nissan circular logo.

If you are wondering if Nissan is a good brand, the answer is “YES” in every sense of the word. As we have learned from this article, Nissan was established in Japan and officially became Nissan in 1934, and since then it has continuously demonstrated its commitment to innovation, reliability, and quality. Today, Nissan’s rich history and evolutionary engineering can be felt and seen in every car from the Leaf to the Navara, X-Trail, and the GT-R.

With a global presence of more than 80 years, Nissan is known for its experience and reputation in vehicle manufacturing with its cars being stylish, innovative, sporty, and efficient. Nissan has also invested heavily in the production of quality parts, components, and vehicle technologies which built Nissan’s reputation for being incredibly reliable.

To find the right Nissan for you, please visit BE FORWARD and check out our extensive list (18000+) of quality used models.