Visitors to the Tokyo Motor Show are guaranteed to be wowed by next year’s vehicles, possible production cars for the future, and the unusual sub-automobile concepts that seem to only make waves in Tokyo. Many of these products are amazing. Asimo was introduced in just such a manner, after all. While Asimo makes sense in that robots are seen as a very real future event, some of the concepts are a bit harder to conceive as being practical, fun yes, practical..maybe not. Honda, always a company to bring an odd concept or two to the Tokyo event, has several such concepts that should be known around the world. So, let’s have a look at the U3-X, the UniCub, the WanderStand, and the WanderWalker. 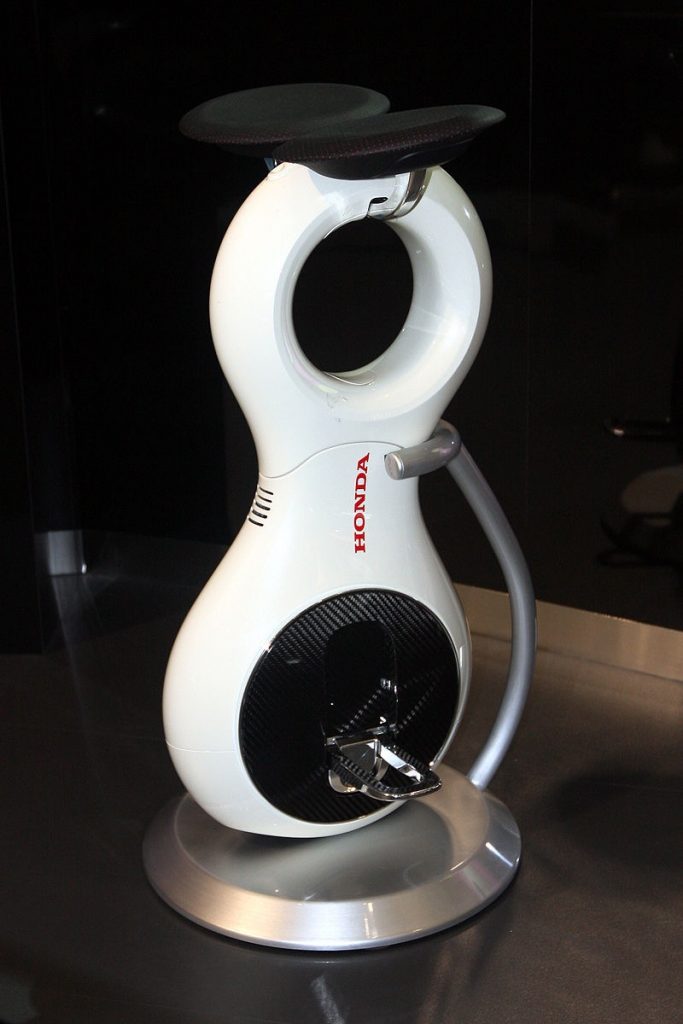 Asimo is the grandfather of most of Honda’s odd concepts. Many are based on technology developed to assist with his movement. The U3-X, designed as a one-wheeled personal transport device, is based on Asimo’s basic mobility units. The U3-X, which debuted in 2009, can provide free movement in all directions. Designed to mimic the free movement of human walking, the unit can move forward, backward, side-to-side, and diagonally. The free-range mobility is provided through the Honda Omni-Traction (HOT) drive system. This system combines multiple small motorized wheels. The design connects these multiple wheels inline, essentially creating one large wheel from the many. Forward and backward movement are created by using all of the wheels at once, Lateral and diagonal movement are created by using a group of the small wheels independently. Not only can the U3-X move easily across most urban landscapes, it is lightweight and compact. Weighing just 10 kg, it can be easily carried into an office area for storage. 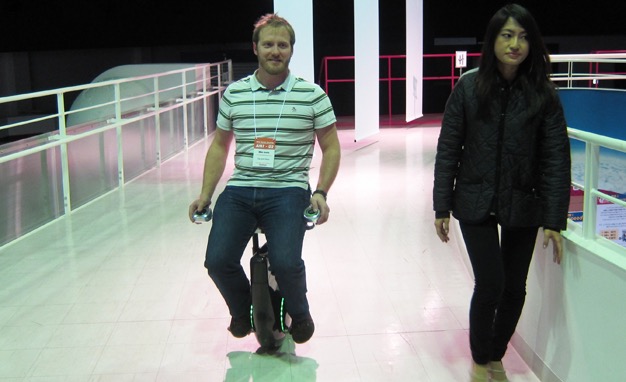 The UniCub(pictured above being ridden at the 2011 Tokyo Motor Show) is an updated version of the U3-X. The basic design is similar to the U3-X, but a few tweaks have been added to improve the unit’s stability. Main among them is the addition of a secondary wheel that increases rider stability and helps the UniCub fully rotate with ease. Honda has also added armrests, one of which sports a joystick to help pilot the device.

The UniCub constantly works to remain upright. Without a rider, it moves very slightly side-to-side to remain balanced at all times; little twitches that can be humorous to lookers-on. When mounted, all the rider need do is lean in the direction they wish to go. The joystick was incorporated to add refinement to the UniCub’s movements and add control during full rotation.

The UniCub faces a few obstacles before it can move from prototype to production. The two most glaring are its limited battery life and weight capacity. The battery is limited to one hour of use. Not only that, but speed and weight bearing suffer as the battery drains. It is also limited to carrying 100 kg. That weight limit may not be such an obstacle in Japan where the inhabitants are smaller, but in countries where people are larger, it is a serious obstacle, limiting its potential market. A third issue is the physical exertion and control of muscle movement needed to use the UniCub. If the unit is to eventually be sold as a mobility device for the elderly or disabled, control will need to become easier so as to accommodate limited muscle control and endurance. 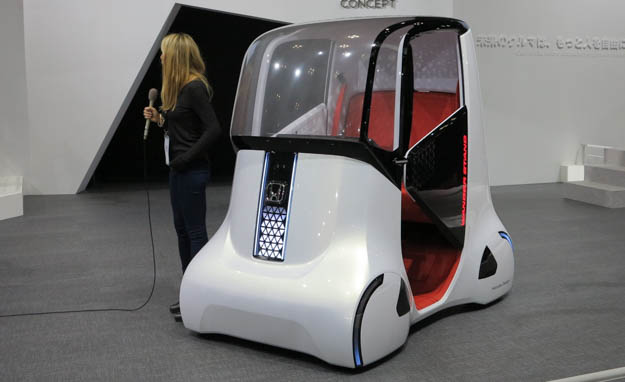 The WanderStand looks like something you would expect Dr. Who to step into. It would make a much more interesting TARDIS than an old police box. Enough of that! The WanderStand is able to seat two adults. Now, no one says there will be ample cabin space. The device is only 1.85 m tall, 1.1 m wide, and 2 m long. It does feature a lot of cool tech like a heads-up display on the windscreen and a dash that looks more suited for a space ship than a kei car alternative. The WanderStand fits into the growing need for shrinking cars in Japan, but goes one step further by adding the HOT drive system. The free movement allowed by the system would allow traffic to look very much like the futuristic visions seen in sci-fi movies…cars whipping to their destinations, stopping, and moving laterally into a parking space. There are still obstacles to overcome. Weight capacity and speed are two important issues at this time. Size and weight concerns aside, even in congested urban environments, traffic generally travels faster than the WanderStand’s maximum speed of 6 km/h. Throw in battery life and the lack of a dedicated lane for such small vehicles to safely operate in and you can see the challenges preventing near-future production. 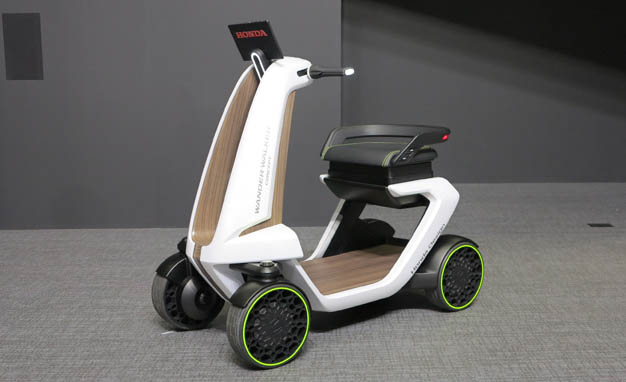 The name WanderWalker is a complete misnomer. It is actually a seated scooter. Granted, a very low-speed scooter, but a scooter nonetheless. It is also Honda’s most sensible concept for personal mobility…in our opinion at least.

It argues as a personal mobility solution in several ways. First of all, the front wheels turn nearly 90 degrees, allowing it to maneuver in tight spaces, like a home. Its tight turning radius(just 1 meter) is another argument for in-home use. Then there is its miniscule dimensions. The unit is only 54 cm wide, small enough to fit through any doorway or the turnstiles for most public transportation systems. Being on four-wheels, it is easy for the disabled and weak to control. The top speed of just 6 km/h is perfect for normal walking conditions since the average human walking speed is just 5 km/h.

Concepts of this type are not exclusive to Honda. Nearly every major automaker in Japan is looking for smaller mobility alternatives to help solve the crushing urban traffic congestion that is a hallmark of the nation. So far, our vote is for the WanderWalker being the first of these concepts to find a viable production niche.