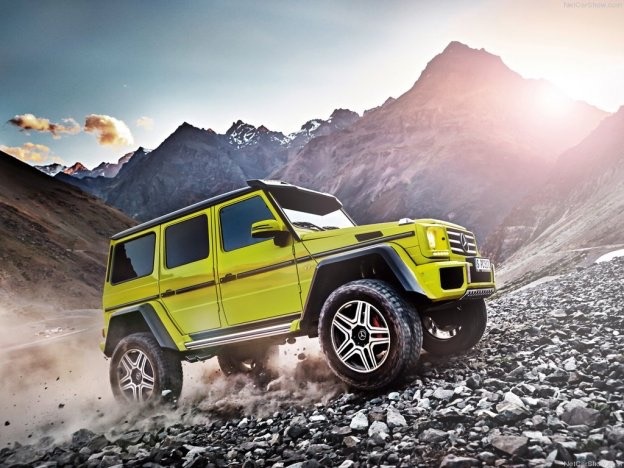 The Mercedes-Benz G-class is a mid-size luxury SUV manufactured in Austria. Even the most casual of observers can recognize a G-class from a distance without seeing the badging. All you have to know is that it looks like a shiny box on wheels and BOOM, you are a G-class expert. Affectionately called the G-Wagon, the SUV has been in production since 1979, with several iterations available over the years. Recently, the Germans introduced a new version, the 2017 G500 4×4 Squared and it is a dandy of a box…ummm, SUV. Yeah, we meant SUV. Let’s have a look at this new G-G-Wagon!

Before we get into the specs and details of the G500 4×4 Squared, we have to tell you why the thing was built int the first place. It seems that Mercedes-Benz is always looking for ways to top itself. Not wanting to tap the AMG builders for this project, the engineers at Benz developed a credo before delving into an upgrade for the G-class. That motto: ”Only a G-Class can be better than a G-Class”, was first and foremost during the development phase. How was it translated into the Squared? By taking inspiration from the G 63 AMG 6×6, of course. According Mercedes-Benz’s dedicated website, the engineers are: ”now stepping up a gear with the G 500 4×4 Squared. The basic recipe for this overcomer of everything is simple: take the superior all-wheel-drive powertrain including portal axles from the 6×6 – take away one axle – and blend it all with a newly-developed variable chassis and the series-production G-Class body.” Well, alrighty then! Now, on to the details.

What Expert Drivers Say About The Ride 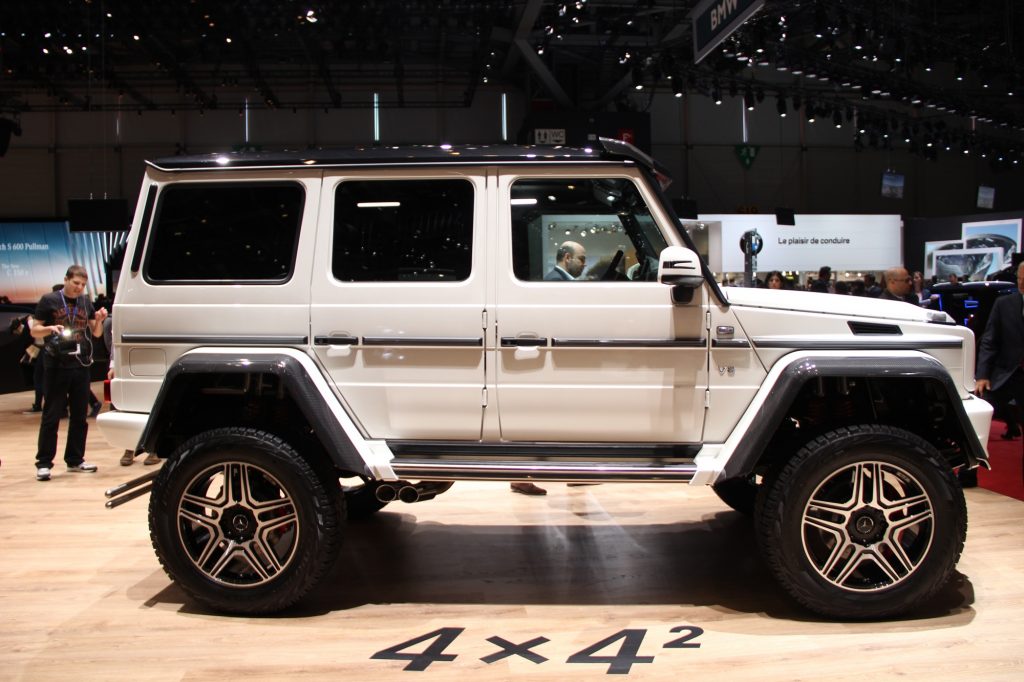 One of the surest ways to sell a bunch of vehicles is to send a few samples to the professional drivers at the top automotive magazines around the world. A sampling of the comments buzzing around the internet and in print include;

Motor Trend: ”The G500 4×4 Squared is a mechanical monstrosity and without a doubt is one of the most ridiculous, amazing, impractical, unbelievable vehicles that I have ever driven..”

Car and Driver: ”the mega ground clearance and the massively superior approach, departure, and breakover angles of the 4×4 Squared allow for scrambling over even the gnarliest terrain.”

Those two quotes pretty much sum up everything you will read anywhere, but what makes it such a mechanical monstrosity and allows it to scramble over rough terrain?

The Specs, Just Give Us The Specs

You can imagine the G-class engineers sitting around stroking their rather impressive Freud-like beards pondering how to make the Squared more impressive than the base G-wagon, yet retaining the basic look of a functional box. Then it hits…make everything bigger!

The first thing attacked was the width. The baby(base G-class, if you prefer) version is a ho-hum 151.38 cm wide. The big-dog is 181.35 cm. Given that many of the roads in those quaint Bavarian villages we all hear about are a tad narrow, the G-Wagon may have to take out a few buildings to pass through. With such a wide stance, the tyres extend beyond the standard G-class body, so carbon fibre wings have been added.

Why stop with a wider track? 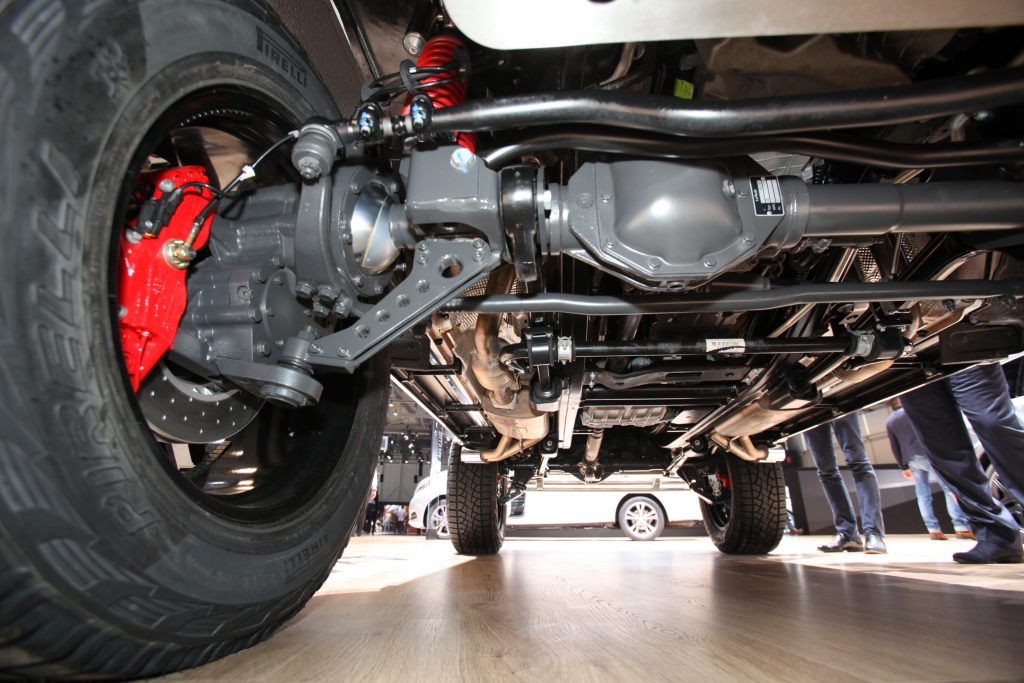 The 4×4 Squared sits just over 2.4 metres tall. Imagine a vehicle taller than the largest basketball players in the world? It dwarfs gentlemen like Shaquille O’Neal and Yao Ming!

All of that height is wasted if you do not have enough ground clearance. The Squared delivers there as well, offering owners 45.72 cm of terrain conquering space. The impressive clearance is mainly provided by the portal axles. For those who do not know, with a portal axle the two axle shafts feed into the top of the wheel where they are geared to the hub instead of the traditional set-up where the axles feed into the center of the wheel. Not long ago, this was military only technology.

Such a larger-than-life SUV requires a unique suspension system. The 4×4 Squared suspension features eight dampers and eight springs, a feature Mercedes attributes to rally sport. Interestingly, each damper is a gas bypass strut. To make the dual-damper system more pause-worthy, one damper of each set is fixed and the other uses variable damping rates. The variable dampers have two modes, Comfort and Sport. According to Mercedes, the system can switch modes in 15 milliseconds. With such a meaty suspension system, you need big meat…er, rubber…underneath. The 4×4 Squared sits on Pirelli Scorpion ATR 325/55R22.

Now that we know how it sits, how is it powered? 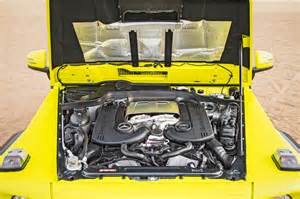 The engine was stolen from the G550. It is a twin-turbocharged V8 that thrusts 416 bhp through an automatic transmission to provide 610 N-m of torque. Mercedes estimates that the 0-100 km/h time is approximately six seconds and that the Squared has a top speed of 210 km/h. The maker does recommend that you keep your speed under 160 km/h with the standard off-road tyres fitted. Something about control issues when using off-road tyres on pavement. Go figure.

Pricing this Frankenstein’s monster of an SUV can be a shock. Keep in mind that it is fitted with a military-grade suspension system. The base Mercedes-Benz G500 4×4 Squared is going to set you back an easy E190,000, loosely translating to L151,000.