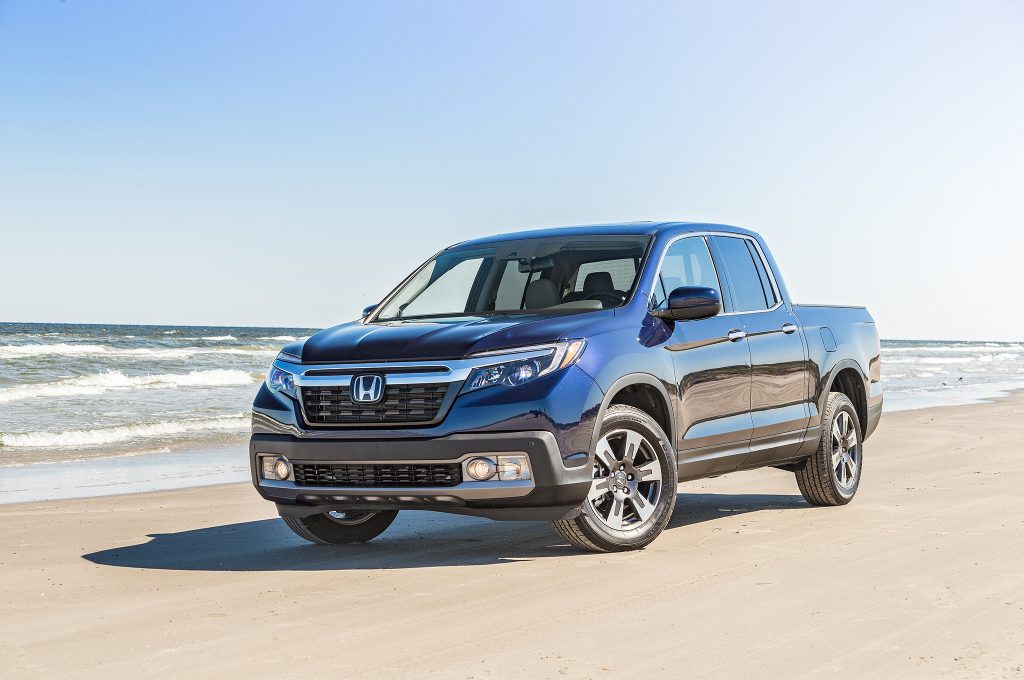 The first generation Honda Ridgeline followed a predictable flow chart from Honda. It was flow chart taken from the SUV and minivan planning rooms: show up late to the party and hope for the best. The formula worked in those two segments, why not with a pickup truck? The first generation truck was introduced for the 2005 model year and sales were brisk in the U.S., Canada, and Mexico during the first four model years, then the truck became outdated. By the fifth year sales had dropped in half; by 2015 the truck only sold 520 units…time to go by any standards. Despite low sales at the end, the Ridgeline is a very profitable unit, so Honda went back to the drawing board to develop a second generation truck that may be able to regain the automaker’s foothold in the lucrative truck segment.

The basic building blocks are still there: unibody design, plastic bed, a strong V6 engine, and an automatic transmission. The Ridgeline embodies an on-road only car-like taste and feel. While that was quite unique when the Ridgeline was introduced in 2005, it seems nearly a demand in the segment today. Honda has taken that car-like appeal to another level by offering front-wheel drive layout as an option. 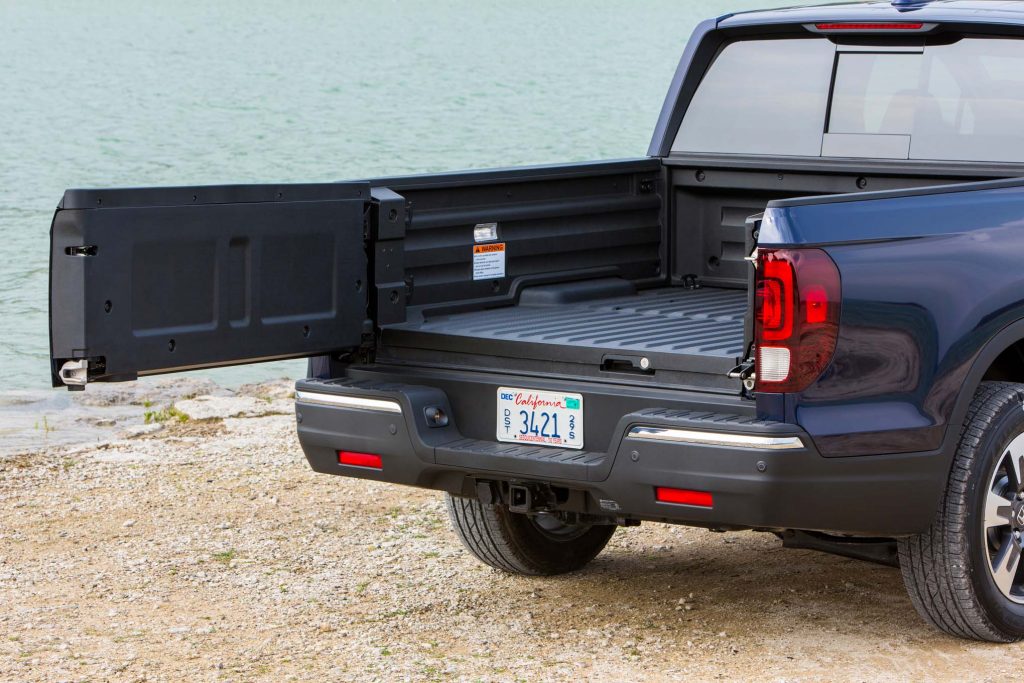 As with the first-gen truck, the 2017 Ridgeline shares quite a bit of its architecture with the Honda Pilot…the longer version designed for three rows of seating. That may make it sound as if the Ridgeline is going to be a soft, passenger-only truck, but the opposite is true. We said shared architecture, not exact underpinnings. Honda spent a lot of time and money to ensure the second-gen is a robust, capable truck for the masses, not just niche Honda owner’s who want a Honda-centric garage. In order to do that, the new model had to be stiffer, safer, and quieter than any other Ridgeline; yet able to tow 1,590 kgs in FWD setup or 2,270 kgs when equipped with AWD. Those towing numbers needed to be coupled with a payload capacity north of 700 kgs.

Some of the Pilot’s bits-and-pieces were up to the task. For instance, Honda was able to use the same coil springs and anti-roll bars. On the other hand, the Ridgeline’s design team had to go back to the drawing board to find the right front struts, rear shocks, control arms all around, steering knuckles, and the hubs(as well as their bearings). All of these parts have been made bulkier, more sturdy for the Ridgeline. The result of these machinations is a nimble truck that responds well to each movement of the driver’s hands on the wheel. There is none of the awkward lumbering of the long Pilot, but some of the free-wheel of the CR-V bleeds through.

We have already covered the Ridgeline’s towing and payload capacities in metric numbers. For those of you in the States, those numbers translate to 3,500 lbs towing in FWD, 5,000 lbs in AWD, and each setup offers 1,500 lbs in payload capacity. All are more than enough for your home improvement needs or towing your boat/camper where ever you want to go. The numbers may not be quite enough for professional contractors, though.

Under the hood is a solid 3.5L V6 offering 280 bhp and 262 lb-ft(355 N-m) of torque. The engine remains essentially the same as that in the first-gen truck, but Honda estimates there will be a 1.8 second drop in the 0-60(0-100 km/h) time. Given the known numbers from the first-gen, this means Honda is estimating a 6.5 second sprint, putting the 2017 Ridgeline in place to capture best-in class acceleration honors. Fuel economy numbers have not been released yet, but the Ridgeline’s powerplant uses cylinder-bank-deactivating and is mated to a six-speed automatic transmission. The combination should allow the second-gen to outperform its predecessor in the fuel economy department. 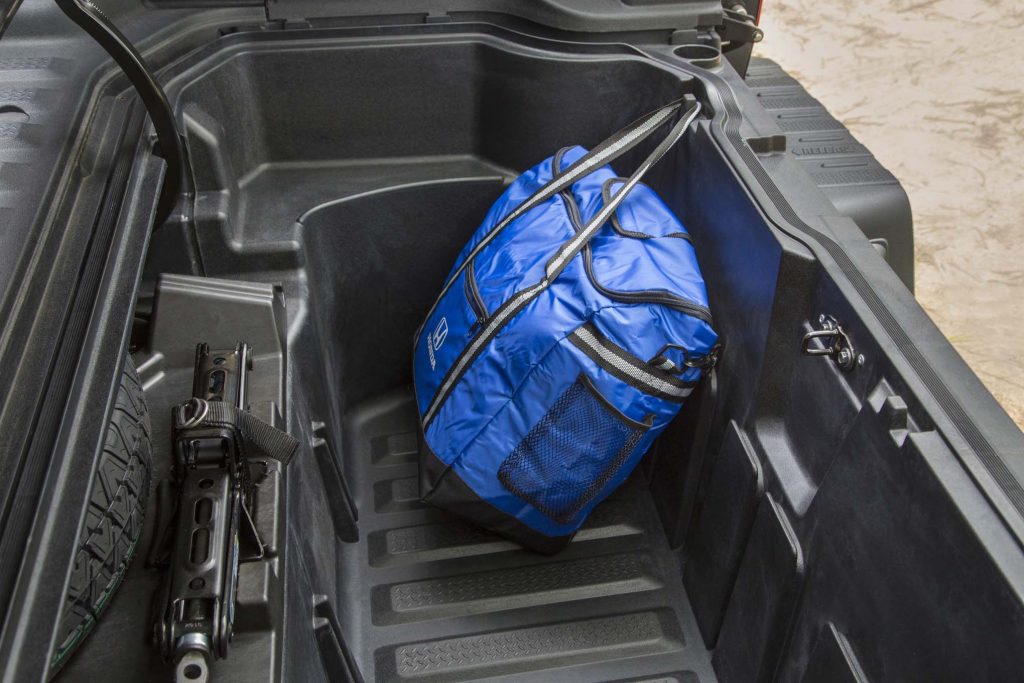 The Ridgeline’s gearbox uses the same gear setup as the Pilot. The individual gears prevent you from experiencing the typical rear wheel slip you expect to feel when you slap the gas pedal to the floor of a truck. Despite that slip prevention, the acceleration curve feels strong once you have the truck moving. The new Ridgeline also features a torque-vectoring rear differential that should provide real-world drive force without being in low range or having to manually lock the diff. When needed, up to 70 percent of the truck’s power is diverted to the rear. When towing or hauling heavy weights, there is a D4 button that holds the gearbox steady in the 1.065:1 gear ratio of the truck’s fourth gear. The second-gen truck retains the In-Bed trunk the Ridgeline is famous for. It has been reduced to 7.3 cubic feet, but it is still there. Other hold overs include a flip-up rear seat and dual-action tailgate.

The Ridgeline is set to hit the market in July of 2016. The first units will be offered in the United States only, with Canada and Mexico to follow…depending on sales. There are tentative plans to enter the African market as well, again depending on sales. The Ridgeline’s price range has been set between $30,375 and $43,770(L20,700 and L29,833). Given the current price range of trucks from Ford, etc, that is a reasonable price point for a truck that is sure to regain its reputation as a unique option within the segment.