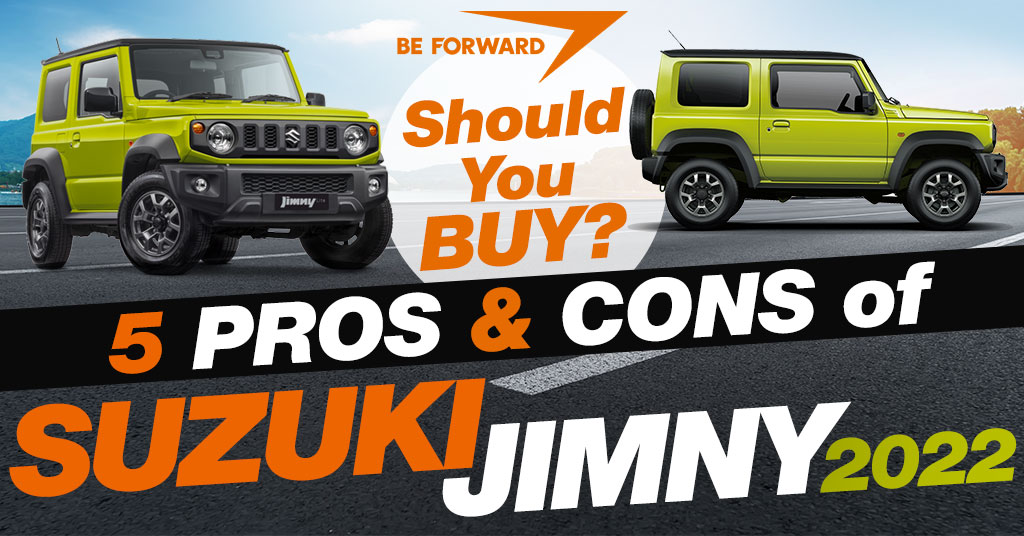 The Suzuki Jimny is an all-terrain mini SUV, produced by the Japanese company Suzuki since 1970. The Jimny is currently in its fourth generation since 2018.

The 2022 Jimny is still based on a traditional steel ladder frame, but with a new, stiffer substructure that supports the rigid front and rear axles with respective differentials, and a three- or four-cylinder petrol engine with 54 hp and 46 lb-ft or 100bhp and 95lb-ft respectively.

Let’s take a brief look at the 5 pros and cons of the 2022 Suzuki Jimny as part of knowledge sharing and creating awareness that will simplify your decision-making. Please follow through.

The 2022 Jimny might not be a very good car on-road, but with its off-road ability it makes up for all the on-road shortcomings boosted by standard features such as a selectable 4WD, a low-range transfer case, hill hold and hill-descent control. The only shortcoming might be its ground clearance of 1645mm which might not go down very well with extreme off-roaders, but it’s more than enough for an average user.

Another feature that elevates the Jimny’s off-road ability is the use of body-on-frame construction with rigid front and rear axles.

One area where the Jimny shows its strength is off-road. Tested several times on challenging terrains in various parts of the planet, it simply swept the teams off their feet for how easily it traversed through those rough and rugged terrains. The Jimny has plenty of ground clearance and loads of grip, paired with a low-range transfer case, and the hill hold and hill descent control systems collectively make life very easy when traversing steeper slopes or rugged terrains. Although its soft suspension system won’t stop throwing you around, still, nothing will stop the aggressive Jimny off-road.

The 2022 Suzuki Jimny fairs very well when it comes to road presence. Despite its compact nature, it is a car that designers succeeded in creating a great mix of backward-looking and robustly designed cues that give the Suzuki Jimny a great and unique stance with looks that separate it from the crowd. With these looks, the Jimny became the trendiest off-roader on the market.

The 2022 Jimny (none JDM version) comes fitted with a modified 1.5-liter engine that is more powerful than the previous generations. This might not feel like a very big and powerful engine, but compared to the car’s size and weight, it fares very well. And to match the engine’s performance, Suzuki paired it with a very easy-to-fix and capable 4WD system, which enables it to go anywhere.

The Jimny’s miniature size makes it one of the very few 4×4 SUVs that are way easy to ride. Apart from its ground clearance of 1645mm which improves its off-road capability, its low turning radius of 4.9m and light steering wheel make the Jimny a very easy car to maneuver within the city even in high traffic conditions.

The 2022 Jimny comes with a 5-speed manual transmission as standard with short gearing, which equates to the engine being quite noisy at speeds of 100 km/h or more (A sixth gear would’ve made things better in this regard). But, wind and road noise are well deadened, so if you maintain your speed below 80 km/h the cabin becomes a relatively refined place.

The Jimny can accommodate four passengers comfortably but without any baggage whatsoever. The cargo area is utterly minuscule, even with the seats folded flat. But, if your definition of practicality is a small go almost anywhere SUV, then the Jimny might fit in your frame.

Despite its size, the Jimny is surprisingly generous for front and rear passengers. There’s ample space for taller adults up front, while into the rear is cumbersome, but once you get there you’ll be treated with enough head, elbow, and knee room even if you are six-foot tall.

By providing sufficient space in the rear seat, Jimny’s boot was sacrificed to a great extent. With the rear seats up, you have only 85 liters on offer with the rear seats in place. The available space is only enough to fit a soft rucksack or laptop bag, anything more than that will require the folding of the two 50:50 fold rear seats to unleash a 377-liter cargo area. If you need to carry much longer items, you can fold flat the front passenger seat.

Sadly, the Jimny falls short on safety tech and equipment. But it’s not that bad, it still comes with features such as lane-departure warning, autonomous emergency braking, and plus six airbags within the cabin.

Its crash score as rated by ANCAP in 2018 was not impressive. It receives three out of five stars, which is way below average, leaving the Jimny behind most other new cars.

Despite some of its shortfalls, the Jimny is one of the trendiest 4×4 in the market, and its demand remains very high. With that said, Suzuki is working on a backlog of orders, which has resulted in an imbalance (limited availability) between supply and demand. Since this is the case, if you are out there looking for one, be sure to get it as a used model at an inflated price or place an order and be patient, with the average wait time in some markets falling between six and eight months.

Suzuki has made great strides in giving the 2022 Jimny striking exterior looks. Nonetheless, when it comes to interior finishing, this Jimny still feels ordinary and frills-free. The dashboard and instrument cluster are too basic and archaic. The dash and door panels are made of hard scratchy plastics built to withstand the test of time and not for luxury.

The Suzuki Jimny is a trendy and loved small SUV that’s neat and good-looking, but its prowess as an off-roader hasn’t needlessly diluted it on the road. Indeed, it’s got a more esoteric demeanor than any of its predecessors, and its achieved impetus and unhurried controls make it exuberant splendid fun to tag along in.

It’s got its flaws such as lackluster performance and an unreliable crash-test score and many more, but difficult to ignore its looks, its off-road ability, and fashionable appeal.

We at BE FORWARD have stocked 1700+ old and new used Suzuki Jimny’s. Check out our stock to find your next car.