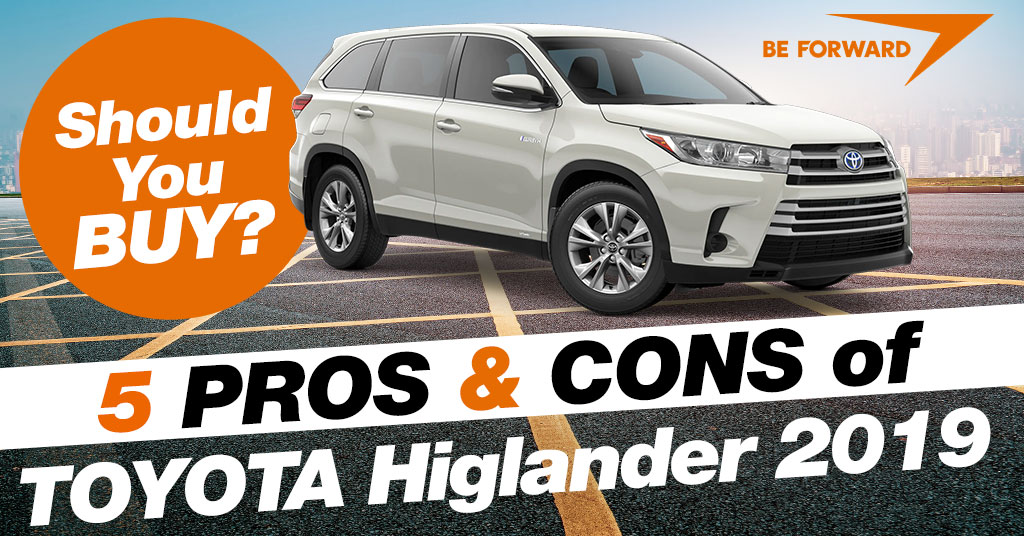 The Toyota Highlander, which is also referred to as the Toyota Kluger, is a mid-size crossover SUV which was first introduced in 2000. The Highlander is known for its reliability, exquisite appearance, luxurious interiors, off-road capabilities, and fuel efficiency. It is also equipped with several safety features for the security and convenience of the occupants. The Highlander is now in its fourth generation with updated features, more powerful engine options, a modern and spacious cabin, and state-of-the-art features.

The XU70 series is the latest and fourth-generation Toyota Highlander which was revealed on 17 April 2019 at New York International Auto Show. The Highlander XU70 series is available in a front-engine, front-wheel-drive / four-wheel-drive system and built in TNGA: GA-K (Toyota New Global Architecture) platform. The XU70 series brings a new level of distinctive design with power, efficiency, and durability set by its previous generations.

The latest Toyota Highlander offers comfortable cabin space for a large family that can accommodate seven to eight passengers and the seats offer plenty of lumbar support. The front and second rows have plenty of head, shoulder, and leg room. Although the third row might be limited to adults, it is perfectly suited for children. The cargo space is quite limited but folding the 60/40 split fold-flat third-row back seats creates 40.6 cu-ft. space, and can extend up to 73.3 cu-ft. when folding the second row seats.

The V6 engine of the Toyota Highlander certainly gives a lot of power to the car. The 3.5L 2GR-FKS V6 petrol engine produces a maximum power output of 295 hp and 263 lb-ft of torque. The V6 with an all-wheel-drive system gives the Highlander a driving performance and refined sensation which makes it all the more perfect for any off-roading adventure.

The Base Engine is Not Powerful Enough

The standard engine is a 2.7L T24A-FTS straight-4 petrol engine producing a maximum power output of 185 hp and 184 lb-ft of torque, with front-wheel drive and a 6-speed automatic transmission only. It is nowhere near the amount of power and smoothness of the 8-speed, which you can get with the V6 engine. So, in all reality, it is best to just go for the V6 engine.

Controls are Difficult to Reach

The Toyota Highlander 2019 comes with a comfortable and luxurious cabin but the minor challenge the driver can get is the controls. Some of the controls on the touchscreen display monitor and along the dash might be hard to reach. The consumers will likely take some time to get used to it.

The Third Row is Limited

Just like in any other SUVs minor case, the Toyota Highlander has limited space in the third row. While the children and small teens can fit just fine, adults will definitely have a hard time with limited space. There are three available seatbelts in the back, but since the space is not as plentiful as in the front and second row, it is best to fit only two children.

Apple CarPlay and Android Auto are now common features in some of Toyota‘s competitors, but it seems the Toyota Highlander 2019 will not come equipped with this smartphone app system. Though Toyota offers Apple CarPlay and Android Auto in some of its models, it still shows a lack of progression and needs more improvement to keep pace with its rivals.

The Toyota Highlander is a capable off-roader but with an eight-speed transmission, it is not a good car for city driving. It has a problem when it comes to choosing a gear to be in and it constantly changes, making the engine go into higher revs all of a sudden. The eight-speed transmission struggled when accelerating from a stop and it became jerky overall.

The Toyota Highlander 2019 is one of the most popular mid-size crossover SUVs worldwide, with outstanding reliability, durability, powerful engines, luxurious interiors, and off-road capabilities. With over four generations, the Highlander definitely proved that it is one of the best among its class with exceptional versatility and efficiency, which is hard to find in SUVs. It is not a surprise that the Highlander is one of the most sought-after mid-size SUVs in the automative market, and can be driven around the city as well as can be used for off-roading.