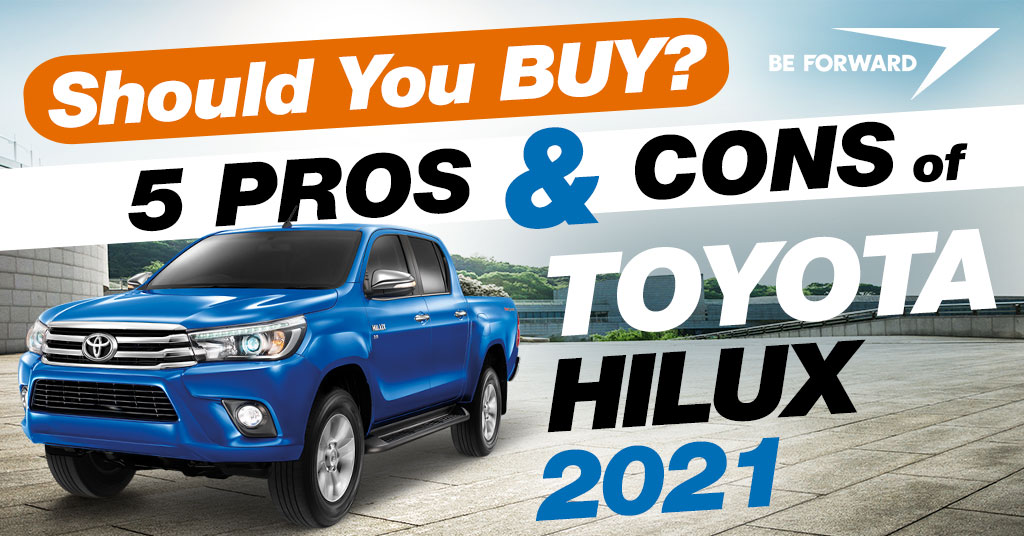 The Toyota Hilux was initially sold as a compact pickup which was first introduced in March 1968 and is now in its eighth generation. The earlier Hilux is available in a front-engine, rear-wheel-drive layout and is known for its reliability and durability which continues to evolve throughout its generation. The current generation of Toyota Hilux was debuted on 21 May 201 using the same platform with the Toyota Fortuner and Toyota Innova; the Toyota IMV platform.

The eighth-generation Toyota Hilux was introduced in 2015 and it has undergone a series of facelifts since its release. The latest Toyota Hilux is a pickup with a front-engine, rear-wheel-drive, and four-wheel-drive system and comes with a broad and tough design. Its unique styling, reliability, efficiency, and capability make it more appealing to buyers. The Hilux also offers several trim variants with a powerful drivetrain, on and off-road attributes, and updated standard features for the convenience and security of the driver and passengers. Now, let us get to know more about the pros and cons of buying the latest Toyota Hilux 2021.

The Toyota Hilux is a dependable all-terrain machine with more superior power than any other pickup truck. The Hilux is reinforced at the front by a double wishbone system and a leaf spring rigid axle in the rear. The 4×4 models come with an auto disconnect differential and differential lock for better traction on the slippery road. The Hilux is built to overcome the toughest surfaces and harsh weather conditions with its outstanding off-road performance.

The latest Hilux has a modern and comfortable cabin with convenient features. The interior is designed to be ergonomic and easy to use with soft upholstery, a state-of-the-art 8-inch touchscreen infotainment system that allows a hands-free Bluetooth connectivity, Apple Carplay, and Android Auto. Added an AM/FM, USB port, nine-speaker JBL sound system, dual-zone climate control system, heat rejection glass, and other luxurious features. These modern features will surely help make your driving experience more fun and pleasurable.

The Toyota Hilux offers several variants to choose from, whether you want a 4×2, 4×4, single cab, double cab, automatic, manual, etc., you can definitely find a suitable Hilux for you. It also comes equipped with notable standard features and safety systems that will surely make your driving experience more fun and exciting.

The Toyota Hilux is a large vehicle with plenty of available parking sensors and reverse cameras depending on the trim level. With sensors and cameras, squeezing into narrow parking spaces and road makes it a bit easier to avoid costly fender benders. The high-end model offers these parking features to provide additional maneuvering skills and also improve the safety of the occupants.

The Toyota Hilux is a large off-road car with intimidating stature. It has a 279mm maximum ground clearance, which is the tallest among the pickup trucks. But climbing aboard poses a certain problem for some family members, especially to young children and the elderly.

The Toyota Hilux is an excellent car with off-road capabilities but it comes with a hefty price and will cost more depending on the trim level. The top-level Hiluxes are much more expensive than the entry-level but when you consider the dependability and performance, it is a good investment. The Toyota Hilux is one of the most reliable off-road trucks and comes with a higher price tag so if you don’t plan on going off-road, you can choose the lower variants.

The Toyota Hilux has a reliable engine but when it comes to its ride quality on smooth surfaces it becomes bouncy when the speed increases. Driving a four-wheel-drive Hilux on the off-road offers stability and firmness, but using the same suspension and drive setup feels bouncy on highways.

The Toyota Hilux uses a 2.8L diesel engine which is powerful enough for any grueling task while on and off-roading. But in terms of engine refinement, the engine sounds noisy even on idle and definitely needs some improvement.

The Toyota Hilux is one of the most popular pickup trucks worldwide, with impressive reliability, durability, powerful engines, luxurious interiors, and on and off-road capabilities. With over 50 years, the Hilux has definitely proved that it is the best among its class and one of the versatile pickup trucks in the automotive market. No wonder it is one of the best-selling pickup trucks around the world, which can be driven around the city as well as can also be used for any off-road activities.

The Toyota Hilux‘s latest model can be a bit expensive which also depends on the trim level and equipped features. Some consumers may not be able to afford its price, but here at BE FORWARD, we offer the affordable and in good condition Toyota Hilux and its variants at the cheapest price which starts from $6,490. The price depends on the model year, trim level, engine, mileage, equipped features, and condition of the car. BE FORWARD also offers a variety of affordable and in good condition cars with outstanding features and great performance. You can check the BE FORWARD store now for more information on how to get one.