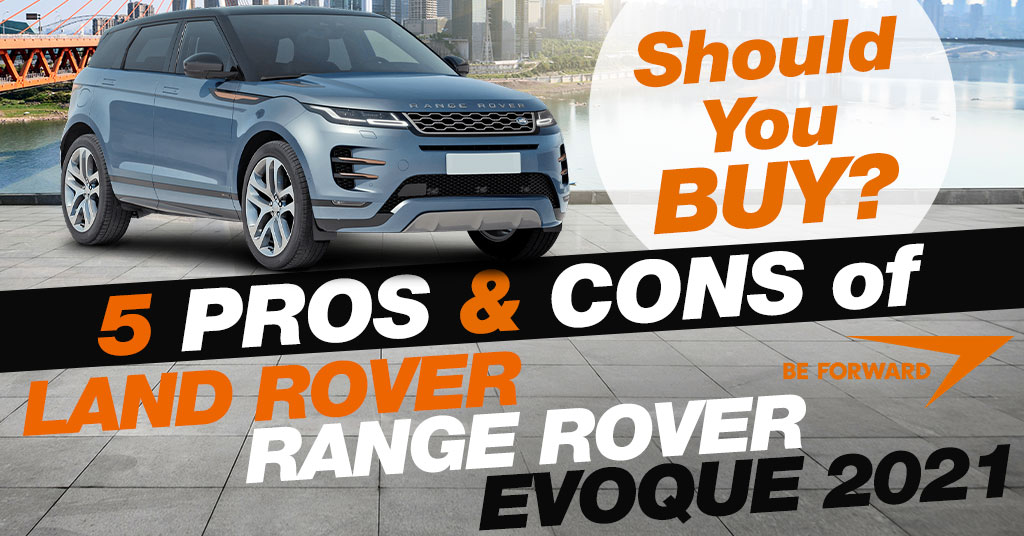 The Range Rover Evoque is a compact luxury crossover (CUV) SUV produced by the British car manufacturer Jaguar Land Rover. The Evoque was introduced in 2011 and is currently in its second generation from 2019.

For 2021, the Range Rover Evoque‘s lineup has been simplified. It now comes with a single 247 hp engine as standard, with the previous optional engine with 296 hp dropped. The most notable change is the introduction of the Pivi Pro infotainment system with quick response, ease of use, and over-the-air updates. Other changes include the addition of a new surround-view camera system that simplifies parking in tight spaces and a new rear cross-traffic collision monitor.

Let us take a brief look at the 5 pros and 5 cons of the 2021 Land Rover Range Rover Evoque in order to understand how the car fares compared to other cars in its category.

One thing Land Rover has perfected over the years is making off-roaders handle well on the road. The 2021 Evoque feels nimble, but dig a bit deeper and you’ll learn that it has substituted some of its agility for a more luxurious feel and comfortability.

In corners, it manages well body roll to agreeable levels and feels composed and nothing else.

In terms of ride comfort, the Evoque reminds you that it’s a Range Rover, and it feels each and every bit like one. At low speeds, the ride can be unyielding, but there’s an aura of gentleness to it still unlike the previous model. The cabin is well insulated against noise and the power plants have been remarkably isolated from the cabin and are relatively quiet at all times, even when the revs approach the redline.

One area in which the Evoque has flourished over the years is in its off-road capabilities. With the introduction of the 2021 model, the Evoque has maintained its status as a capable off-roader. With a wading depth of about 21 inches and a maximum ground clearance of 8.3 inches, and four-wheel drive as standard, the 2021 Evoque is a car that takes off-roading with pleasure. Now add to that some standard technological features such as Land Rover‘s Terrain Response 2 System, which manually or automatically optimizes the car’s performance by selecting one of several modes (off-road setups) depending on the surface be it Mud, Ruts, Gravel, Grass, Snow, or Sand, and a wading depth sensor that alerts the driver when the vehicle approaches its max water depth. Another cool optional feature is the ClearSight Ground View, which makes use of several forward-facing cameras to come up with a composite image of the ground ahead, allowing you to see any obstacles within your path.

The 2021 Evoque comes fitted with a new and refined Pivi infotainment system. The system comes with two 10.0-inch touchscreen displays, one as standard and the other as optional with Pivi or Pivi Pro software. Pivi is standard while Pivi Pro is reserved for the premium models. Apple CarPlay and Android Auto connectivity are standard, while Pivi Pro adds the ability to connect two phones at the same time via Bluetooth and over-the-air updates.

Once you step into an Evoque, the first thing to capture your attention is the premium feel – the low-line dashboard, the studious trims and materials, voluptuous seats, and the twin-screen infotainment system.

The driving position is just about perfect, placed highly above non-SUV, but reclined enough to distance itself from feeling truck-like. The major drawback is poor visibility because of the sizeable A- and B-pillars, but also the slit-like rear windows that could prove claustrophobic especially if you opt for dark interior colors without the panoramic sunroof.

The Evoque cabin is handsomely designed and premium-looking. Each and every surface is decorated with elegant materials that include leather upholstery as standard or Windsor leather as an upgrade and aluminum or real wood trim pieces.

Up front, the Evoque provides the driver with a steering column and seat that can be adjusted in several ways to the driver’s comfort. There is also enough headroom for both the driver and front passenger. All trims have cushy, supportive, luxurious, and good lumbar setting seats.

Rear seat passengers are treated with plenty of head and legroom, even when front seats are occupied by tall passengers. Rear seat occupants have a separate control panel for the climate control system at the rear and USB sockets.

The 2021 Evoque comes fitted with several power options, including petrol, diesel, and a plug-in hybrid. Of them all, the PHEV is the most efficient.

The 2021 Range Rover Evoque PHEV (P300e) is powered by a combination of a 1.5-liter (AJ150) petrol engine mated with a new 8-speed automatic transmission that transfers power to the front wheels and a 109 hp electric motor that propels the rear wheels (Electric Rear Axle Drive (ERAD)) and powered by a 15kWh lithium-ion battery located under the rear seats.

So if you are looking for a cargo-hauling family car, then the Evoque is not the best in the class, although it’s roomier than the previous model.

Interior storage includes a glove box, door pockets, a center console bin, and two cupholders at the front. At the rear, you get door pockets that can handle a 500ml bottle. No place for holding items such as phones, keys, and other small items.

The base engine is the turbocharged 2.0-liter which has enough power, but its behavior is dismaying. Acceleration is awkward and extremely laggy; press the accelerator and you get no response at first, then give it some time and it’ll lurch forward. For a car marketed as the ultimate urban SUV, this behavior makes it difficult for city driving. Its automatic stop-start system has issues as well as it does not function as it should, either, and its activation takes too long when you need it to kick in. Lastly, the transmission makes matters even worse as explained below.

The 2021 Evoque comes fitted with a turbocharged 2.0-liter 4-cylinder engine with 246 hp as standard. This engine is powerful enough to effortlessly accelerate the car from a stop to higher speeds with zeal. However, the standard 9-speed automatic transmission is at fault at times as it can sometimes seek the correct gear. This typically occurs when you need a quick burst of acceleration, and the transmission fails (sometimes) to respond, no matter how hard you press the accelerator. Press the accelerator pedal halfway down and it will occasionally downshift two gears.

The 2021 Evoque is 172.1 inches long and weighs 1.78 tons without passengers. This weight helps the Evoque feel planted and sturdy compared to most subcompact SUVs. Unfortunately, the weight also gives it a thirsty appetite for fuel, unlike other subcompact SUVs. At 8.5 km/l city, 11.5 km/l highway, and 9.35 km/l combined, it returns about 1.7 to 2.1 km/l less than other cars in its class.

With plenty of new tech that seems up to par on paper, control is cumbersome. The Evoque‘s minimalist design calls for minimal control buttons, as a result, most functions are accessed via the InControl Touch Pro Duo system. That system is not so user-friendly despite its clean look. The menus can be difficult to read, and performing simple tasks can involve clicking on multiple screens to get what you need. And once you finally select the option, there are some delays from when you click to when it starts working.

With all said, we conclude by saying that there is a lot to like about the 2021 Evoque, from its attractive styling and striking interior, as well as its perfect mixture of on-road dynamics and off-road ability. The new Pivi infotainment system with its twin 10.0-inch screens is a welcome addition. But the drivetrain is so average, performance is not up to par, and fuel efficiency is below-average.

Please visit BE FORWARD and check out our list of 2000+ used Land Rover Range Rover Evoque’s listed for sale.