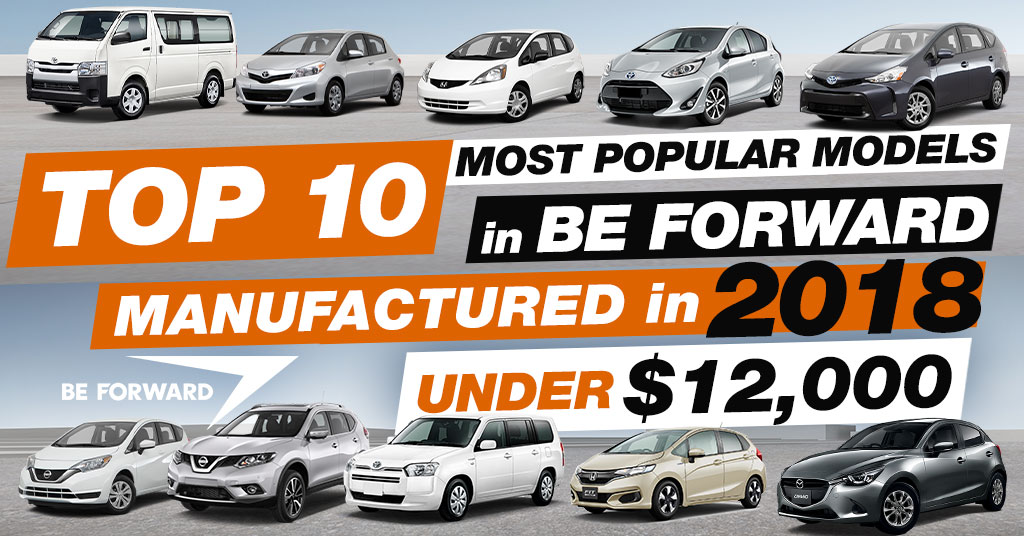 The annual calendar of the automotive industry is one of the busiest when it comes to new cars being introduced or news of an upgrade to an existing model. And us BE FORWARD being part and parcel of the automotive industry, we have witnessed how cars introduced or upgraded in 2018 were received by car buyers and enthusiasts from the statistics that we get from our recorded sales and will like to share this information with our customers and would-be customers just to share some insights as to what these cars are all about.

Mazda Demio (Mazda 2) is a subcompact car manufactured by the Japanese company Mazda. The Demio was introduced in 1996 and is still in production with current models known as Mazda 2 and is in its fourth generation. The 2018 Demio is available as a four-door sedan or five-door hatchback in Neo, Maxx, Genki, and GT trims (named differently in other markets).

The 2018 Demio (Mazda 2) is part of the fourth generation model introduced in 2014. It has plenty of appealing features for buyers who are looking for a sporty small car with a good balance of ride quality and efficiency.

Inside, the 2018 Demio looks upmarket. It features a neatly styled dashboard with a trio of eyeball air vents and controls with a metal-effect knurled texture. The instrument panel features a large round speedometer flanked by digital displays for the trip computer and a rev counter on either side.

Under the hood, the 2018 Demio is available in a choice of three petrol and one diesel engine. The three petrol versions are the 1.3-liter Skyactiv-G 1.3 (P3-VPS) with 83 hp and the next two are based on the same 1.5 Skyactiv-G (F-P5) powerplant with either 114 hp or 113 hp mild-hybrid system. These engines are paired with either a five-speed manual, six-speed manual, or six-speed automatic transmission.

The Honda Fit (Jazz) is a subcompact car manufactured and marketed by the Japanese company Honda. The Fit was unveiled in 2001 and is currently in its fourth generation. This five-door hatchback is available in LX, Sport, EX, and EX-L trims.

The Honda Fit is a tall hatchback, almost as tall as its HR-V crossover sibling. Its minivan-like design makes it noticeable. With creases and folds here and there, the Fit’s styling is enough to appeal to some.

Inside, the Fit is surprisingly spacious. Its tall stance enables even a 6-foot frame to sit upright without struggling for headroom, and its 39.3 inches of legroom is way above the class. Unlike many subcompact cars, the Fit has ample space on the backseats, and its large doors make it easy to egress and ingress.

The Fits bait is its 470-liter cargo room. And that is further boosted by the “Magic Seat” configuration that can fold up enabling tall and wide items to be accommodated, or folding flat the rear seatbacks unleashing a more conventional load floor with a whooping 1492 liters of cargo space.

The Toyota Probox is a 5-door Van manufactured by the Japanese company Toyota. The Probox was introduced in 2002 and received several mid-life upgrades. The 2018 Probox is part of the 2014 facelift but with several cosmetic upgrades.

The Probox van is a car built for shuttling goods, and due to that fact, its designers kept its interior very basic. Its dash is simple and finished with hard plastics with each end having a round air, with another two placed at the top of the center console followed by a radio beneath it. The instrument panel has one large round speedometer with a small digital information display.

The front seats are comfortable and supportive with enough legroom and headroom, while the rear bench seat is only suitable for short distances. The seats are covered in a waterproof washable material. The floor is also covered with an easy-to-clean rubber material.

The 2018 Probox has a very large cargo area and can be extended by folding the rear bench seat. The versatile nature of the Probox’s interior is what captures most buyers’ attention.

The Nissan X-Trail is a compact crossover SUV manufactured by the Japanese company Nissan. The X-Trail was introduced in 2000 and is still in production, currently in its fourth generation from 2021.

The 2018 X-Trail is part of the third generation model unveiled in 2013. This generation model is available in 10 different variants, varying from 5- or 7-seater front-wheel-drive (FWD) models to 5-seater all-wheel drive (AWD) with petrol engines and the lately added diesel with AWD and 5-seats only.

The sharp exterior looks are boosted by the daytime running LED lights (DRLs) and the iconic ‘V-motion’ grille. The windscreen styling provides the driver with an extensive view of the car’s surroundings, particularly when traversing in conditions with limited visibility.

Inside, it’s premium, it comes with a thick D-shaped steering wheel and finishing is done with nicer-feeling materials all over, enhancing the car comfortably. There is plenty of leg room and headroom at the front and mid-row, but the same can’t be said for the third row in 7-seaters. Its adjustable driver’s seat can be configured to suit the driver’s needs.

The 565-liter (135 liters with 7-seats) cargo room is impressive but it gets even better by folding the rear seats to unleash a maximum of 1996 liters. As an extra, you also get under-floor (Divide-N-Hide) storage beneath the cargo area where you can store valuable items far away from the eyes of passersby (intruders), and the kick-to-open tailgate is a bonus.

Under the hood, the 2018 X-Trail comes fitted with a 2.0-liter (MR20DD) 4-cylinder petrol engine with 135 hp or the same engine paired with a 40 hp motor hybrid system. Other markets offered other engines which are the turbocharged 1.3-liter (HR13DDT), the turbocharged 1.6-liter (HR16DDT), the 2.5-liter (QR25DE) petrol engines, and the 2.0-liter (M9R) diesel engine. These engines were paired with either a 6-speed manual, 7-speed DCT, or CVT transmission.

The Nissan Note is a subcompact hatchback produced and marketed by the Japanese automotive company Nissan. The Note was introduced in 2004 and is currently in its third generation from 2020.

The cabin is open, airy, and spacious, with average finishing. The driving position is good but the lack of a telescopic steering column is bad news for taller drivers. The rear seat is spacious, with enough headroom and legroom. The dash is nicely and smoothly finished, the instrument cluster features two round meters for speed and RPM with an information screen at the center. The center console consists of a double din stereo and three rotary climate control buttons beneath it.

The 2018 Note has a 532-liter cargo space with the rear seats in place and a maximum of 1084 liters with the rear seats folded flat. Nissan‘s Divide-N-Hide cargo floor is also available on the Note, which allows for the storage of flat items beneath the floor and out of sight.

Under the hood, the 2018 Note comes fitted with a 1.2-liter (HR12DDR) 3-cylinder petrol engine with 97 hp and 105 lb-ft torque. The engine is paired with either a 5-speed manual or Xtronic CVT transmission.

The Toyota Prius is a compact car manufactured by the Japanese company Toyota. The Prius was introduced in 1997 and is currently in its fourth generation since 2016.

The 2018 Prius’s exterior still spots the iconic liftback shape with many shapes and angles. It’s a mixture of lines wrapped around the largely curvy body.

Inside, the 2018 Prius is spacious and practical. The dash is plain and simple, it features a center-mounted instrument cluster and the gear shifter beneath the stereo. Its large windows create an airy feeling within the cabin, but also allow plenty of light in.

Storage-wise, the Prius has plenty of storage areas that include the narrow and deep center console, rear cup holders with decent depth, and average-size door pockets. Its 696-liter cargo space is abundant. The flat-folding rear seats can create extra space and the available easy-to-fold cover folds can be very useful.

The 2018 Prius is part of the fourth generation model introduced in 2016. The 2018 facelift introduced new headlights and taillights, the Toyota Safety Sense suite became standard, and an 11.6-inch touchscreen infotainment system was made available.

Under the hood, the 2018 Prius comes fitted with a hybrid system that combines a 1.8-liter (2ZR-FXE) 4-cylinder engine paired with a dual motor generator system. This system has a fuel consumption of between 22 km/l to 24 km/l.

The Toyota Aqua (Prius C) is a subcompact hatchback manufactured by the Japanese company Toyota. The Aqua was introduced in 2011 with its second generation model unveiled in 2021. It is available in One, Two, Three, and Four trims levels.

The Aqua is a five-seat two-row car. Its front and rear seats are comfortable with plenty of head- and legroom for all occupants with exception of very tall people.

Not much changed in the 2018 Aqua, as the car just received its second facelift in 2017. Notable changes include the introduction of Toyota‘s Entune infotainment system with a crisp graphics 6.1-inch touchscreen that’s intuitive and easy to use.

Toyota’s Safety Sense package is also standard in the 2018 Aqua. It includes automatic high-beam headlights, pedestrian detection, and a pre-collision warning and braking system. Under the hood, the 2018 Aqua comes fitted with a 1.5-liter (M15A-FXE) 3-cylinder with 90 hp paired with a 60 hp electric motor for a combined output of 114 hp. The engine is powered by a 0.9-kWh lithium-ion battery pack situated next to the car’s petrol tank under the rear seat. This hybrid system is paired with an eCVT transmission. The Aqua’s fuel consumption is rated at 20 km/l.

The Honda Fit/Jazz is a subcompact hatchback produced by the Japanese company Honda. The Fit was released in 2001 with the current fourth-generation model unveiled in 2019.

The 2018 Fit is part of the third generation model which received its last facelift in 2017. Noticeable changes in the 2018 model Fit include the availability of Android Auto, Apple CarPlay, and the Honda Sensing suite of active safety features.

The Toyota Vitz (Yaris/Echo) is a subcompact hatchback produced by the Japanese automotive company Toyota. The Vitz was introduced in 1999 and is currently in its third generation since 2010.

The 2018 Vitz is a third-generation model, and part of the second facelift of the third-generation that occurred in 2017. For 2018, Toyota only made some cosmetic changes to the exterior and interior styling.

In the 2017 facelift, Toyota improved the Vitz safety by providing the Toyota Safety Sense suite features that include automatic high beams, lane departure warning, and a pre-collision warning and braking system. These were carried on to the 2018 model.

Standard features on the 2018 Vitz include an Entune infotainment system with a 6.1-inch touchscreen display, a six-speaker stereo, Bluetooth connectivity, a USB port, Siri Eyes Free, a rearview camera, and Power windows and door locks.

The Toyota Hiace is a light commercial van manufactured and marketed by the Japanese company Toyota. The Hiace was introduced in 1967 and is currently in its sixth generation from 2019.

The Hiace’s cabover design provides the driver with great forward visibility, but frontal access is a bit awkward. The cabins finishing materials are of good quality with a great amount of comfort to take pleasure from thanks to supportive seats and sensible ergonomics. Technological features include a rearview camera and Bluetooth connectivity.

Depending on the nature of your activities, the Hiace can be assigned with hauling all sorts of things, provided you chose the right specification, from a bare cargo area in the LWB or SLWB commercial van to the LWB commuter that can provide seating for up to 12 passengers.

After reviewing these cars, we agree that they are all great cars in their own right. Whichever one of these you opt to go for, you’ll have made a great choice as they are reliable, efficient, practical, and dependable cars in their segments.

We at BE FORWARD have stocked all these car models and more, please check out our list of used cars on our website.